Hillary: Vast Right Wing Conspiracy still out to get me

Hillary: Vast Right Wing Conspiracy still out to get me 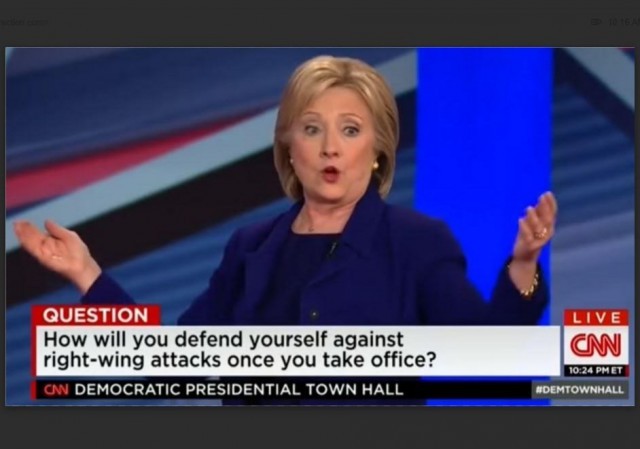 At the Democratic Town Hall on CNN last night, a Hillary supporter asked Hillary about right-wing attacks on her, and Anderson Cooper followed up with a question whether she still believes there is a vast right wing conspiracy against her.

Hillary’s response will surprise no one (emphasis added):

COOPER: I want you to meet Sean Burke (ph). He’s a Democrat from Derry, says he is a supporter of yours.

QUESTION: Hey. Once you become the nominee and got elected, how are you going to defend yourself against right-wing attacks?

CLINTON: Well, Sean (ph), I had a lot of practice.

So I could laugh up here, but it’s not easy. It is a brutal experience. And when it first started happening to me back in the early 1990s when I was working on health care. And you know I was just unrecognizable to myself. What talk radio was saying, what Republican members of Congress and their allies were saying. I was just stunned. I could not understand how they got away with it.

And I have had to learn to take criticism seriously, but not personally. And by that I mean this. The very fair question from Rebecca. People ask you questions or criticize you, think about it seriously. There are lessons to be learned, often from people who don’t agree with you. But don’t take it personally so that it just paralyzes you, literally stops you in your tracks.

And so now that I’ve been through this for so many years, Sean (ph), my understanding of the political tactics that the other side uses is pretty well versed. They play to keep. They play to destroy. They are constantly doing whatever they can to win. And they have a history now going back, you know, 35-36 years of going after people who they believe they can’t otherwise stop unless they engage in that negative attack.

So right now, for example, a couple of hedge fund billionaires have started a super PAC to run ads against me. Karl Rove has you know solicited money from Wall Street to run ads against me. I view that as perversely flattering because clearly they know I mean what I say and I will do what I say. And I will stand in their way and I will stop them from perpetuating an agenda on America that is bad for our democracy, bad for our economy, bad for our societies.

So I know I have to keep defending against them. But I’m the one who has the experience to do that. It’s unlike anything you’ve ever gone through to be the subject of tens of millions of dollars of untrue, terrible attacks.

And now the Koch brothers say they’re going to spend $750 million to defeat the Democratic nominee. I’m still standing, and I will be standing. So don’t worry about that.

COOPER: Let me just simply follow up. You mentioned attacks on the early 1990s.

COOPER: Do you still believe there’s a vast right-wing conspiracy?

CLINTON: Yes. It’s gotten even better funded. You know they brought in some new multibillionaires to pump the money in.

And look, these guys play for keeps. They want to control our country.

CLINTON: Yes. It has gotten even better funded. You know, they brought in some new multi-billionaires to pump the money in.

And, look, these guys play for keeps. They want to control our country. Senator Sanders and I agree on that completely. They want to rig the economy so they continue to get richer and richer, they could care less about income inequality.

They salve their consciences by giving big money to philanthropy, and, you know, getting great pictures of them standing in front of whatever charity they donated to.

I said today in Dover, you know, I don’t think all of the Republican candidates are so ill-informed about climate change that they say they don’t know because they’re not scientists. They’re just doing the bidding of the Koch brothers.

They’re told don’t you dare say climate change is real because we’re in the fossil fuel business. So this is exactly what they are up to. And, yes…

CLINTON: … it is probably — look, at this point it’s probably not correct to say it’s a conspiracy because it’s out in the open. You know, there is no doubt about what they’re doing and who the players are and what they’re trying to achieve.

And they’re shopping among the Republican candidates to figure out who among them will most likely do their bidding. So just know what we’re up against because it’s real and we’re going to beat it.

But it’s going to take everybody working together.

Does Hillary also believe there is a Vast Left Wing Conspiracy against her.

Beside the term “pathological liar”, you’ll find her picture in the DSM.

And then you can thumb down to “crazy bitch”.

Whereas her husband is a congenial liar.

Scratching, “I can’t believe I’m gonna lose to this wacko.”

The Hillary covert self-server has been exposed.

My Facebook profile touts me belonging to The Vast Right Wing Conspiracy!

Hillary, proud member of the vast left wingnut conspiracy to overthrow the constitution

There’s no reason to believe it wasn’t suicide. I do think he didn’t do it where they found him, though. Why was the body moved? My best guess is to prevent a search of the premises where he did the deed, lest certain documents come to light.

It is truly unbelievable that this person – who channels Eleanor Roosevelt and who thinks there’s a vast RWC out to get her – is going to be nominated by her party.

Have you ever noticed fascist progs always need a conspiracy of some sort to explain why people ask them logical,rational questions?Or oppose their unicorn land proposals which history has shown time and time again to be abject failures.Their hatred of individual freedoms is so strong,they just can’t imagine anyone not thinking like them or opposing their lust for total power.

VRWC is the ultimate straw man.

Maybe she should be channelling Betty Ford instead of Eleanor R.

Of course she’s a chronic liar, but perhaps even worse, she’s something of a one-trick pony. She sticks with the oldies even if they’re not goodies. None of her shtick rises above a pedestrian “the check’s in the mail but it looks like I forgot to stamp it” level.

I like to see liars put some work and creativity into it. Remember Michael Bellesiles of Arming America fame? Now there was a liar. Dynamic, energetic, inventive, a one-man circus sideshow well worth the price of admission.

Let’s see, Hilary Clinton, a sociopath with no discernible political skills, is a multi-millionaire who’s been the First Lady of Arkansas, First Lady of the US, US Senator from NY, US Secretary of State, and is currently leading the field for the Democrat Party nomination for president.

If there is a Vast Right Wing Conspiracy against her, it must be the weakest, most feeble and inept conspiracy ever mounted.

It’s kind of like the way the Jews run the world, and yet somehow manage to be constantly subject to pogroms, expulsions, expropriations, quotas, and general harassment. You’d think with 3300 years’ practise at running the world we’d be better at it.

Hillary, is using old campaign methods. She makes wild accusations to take the ” Spotlight,” off of her. I still think that the ” O,”, is going to bring Warren, into the game at the last minute, so people can’t even think about it. Oblamo, is trying to get someone in there who will do ” As he says.” That means a Marxist/Communist.

The only people NOT out to get her, is the scum-wing conspiracy.

May she drop-dead on stage and the audience applaud.