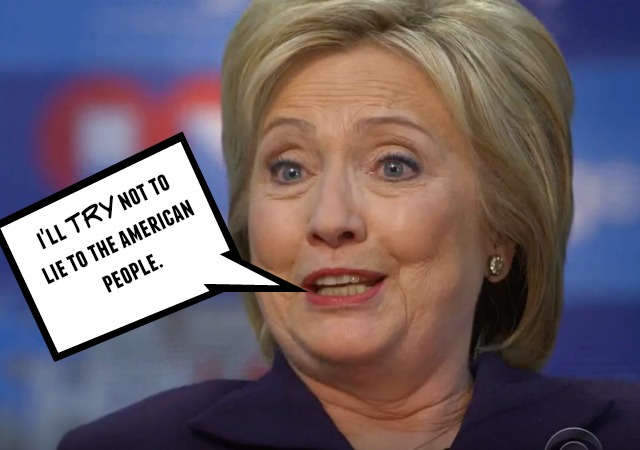 In a bizarre interview, Hillary Clinton was asked if she’s always told the truth. “I’ve always tried to,” responded Clinton who was clearly miffed by the line of questioning.

After her opaque answer, she was prodded further. “Some people are going to call that wiggle room that you just gave them,” he pushed.

“You know, you’re asking me to say have I never [lied], I don’t believe I ever have!” Hillary retorted.

In a just world she’d have been hit by a lightening bolt.

why just three, when there are thousands to choose from?

First, when I got to work as secretary of state, I opted for convenience to use my personal email account
(that account was specifically created days before she started solely for the job. It wasnt her personal account)

I thought it would be easier to carry just one device for my work and for my personal emails instead of two.
(she had multiple devices – up to at least 4, in fact, according to her own words)

I fully complied with every rule that I was governed by
(not surprisingly, storing sensitive & classified Government records on home servers away from Government ever having access to it is against the rules)

But as I — as I said, I saw it as a matter of convenience, and it was allowed. Others had done it.
(no one had a private server to capture everything away from Government hands, and no one else used solely private accounts. They had Official accounts and personal accounts. She never had an official account despite her aids even recommending she use one)

Well, the system we used was set up for President Clinton’s office.
(again, no. It was set up for her days prior to her starting. It was a different system)

And there were no security breaches.
(Just making that up out of thin air, she could have no way of knowing that. Plus we know for a fact that at least some emails between Hillary and Blumenthal were in the public domain more than a year prior thanks to hackers, so…)

About half were work-related and went to the State Department and about half were personal that were not in any way related to my work.
(about a week earlier Fallon had said about 90% of all emails on her account were work related and turned over. Guess the FBI will have to get to the bottom of that contradiction and figure out which of the two is lying there)

And there could very well be more lies in even that press conference, I didnt read the entire transcript. One thing is for sure though; its chock full of whoppers – and its only one single press conference

Were her fingers crossed?

No, but Huma’s were.

Kind of silly to ask an overbroad question like that, especially to anyone who has ever held security clearance. Or really anyone that happens to be human.

We all lie at one time or another, and sometimes for very good and noble reasons. Sometimes folks are even legally obligated to do so.

She could have lied outright and said with unwavering determination: “no, I have never lied to the American people”.

The reporter could have asked a real question, about a specific questionable incident, if they really wanted to be more than a political hack.

I’m not a defender of Hillary, but you do have a point.

I might even give a pass to Trump under deposition:
Q: Now, Mr. Trump, have you always been completely truthful in your public statements about your net worth of properties?
A: I TRY.
Q: Have you ever not been truthful?
A: My net worth fluctuates, and it goes up and down with markets and with attitudes and with feelings, even my own feelings, but I TRY.

There are obvious reasons for statements of net worth to be approximations — though this deposition involved an author making a case that Trump was exaggerating his wealth (not just approximating it).

And Trump is obviously lying about his early Iraq War views, among other things.

Hillary does not lie. She misspeaks. A lot. Often. Mostly all the time.

Seems like the ideal opportunity for her to say, “I am not a crook.”

The reporter should have asked, “Did you ever steal?”

Let’s start with the first one that really enraged me:”Bill and I are going to try to have another child”.This was said when they were in the White House and her poll numbers were very low per Dick Morris.It was a lie.
-How about this one:”Mr.Dale and the crew at the White House Travel office have been stealing and they need to go to trial.”I think the jury took 15 minutes to declare them innocent.All this because Hillary had tossed these 30 year civil servants out on their ears so her “friends” could have their jobs.Shall I go on????

I believe Hillary has lied to herself for so long, all in the name of altruism and “the greater good”, that she’s incapable of speaking the “unvarnished” truth.

Deceit of others begins with self-deceit.

I’m sure this will upset some. Jonah Goldberg’s latest.

‘No, it’s hard being a Clinton because Clintons lie. They are liars. It is what they do. It is who they are. They lie about big things and small. They lie about lying and they lie about having lied about lying. As R. Emmet Tyrell Jr., an almost unhealthy student of Clintonian prevarication, once said, “The Clintons lie when they do not have to lie, and they tell a gaudy whopper when a little white lie would be perfectly satisfactory.”’