Employees presented with a gun once trained and licensed 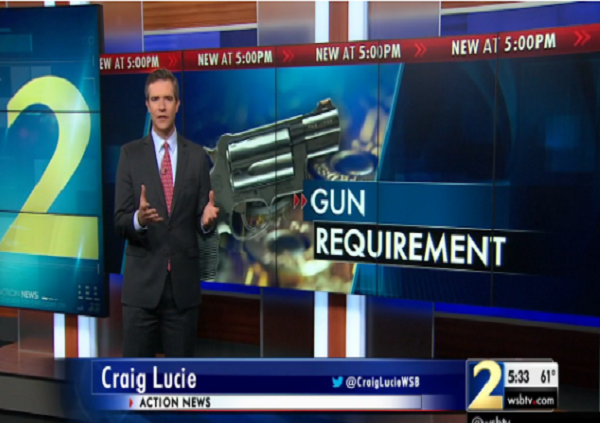 While Obama and the progressive left continue their gun-grabbing attempts to leave law-abiding citizens at the mercy of random shooters and terrorists, one business owner in Georgia has instituted a new policy that requires all of his employees to obtain a concealed carry permit so they can be armed in the workplace.

A local business owner with several offices in Georgia is now requiring all of his employees to get a concealed carry license and be armed.

After each employee at Lance Toland Associates gets their license, Toland presents them with a gun known as the judge. He says it is one of the most effective self-defense weapons and all his aviation insurance agencies carry them openly in the office.

“Everybody has one of these in their drawer or on their person. I would not want to come into one of my facilities,” Toland said. “It’s a 5 shot .410, just like a shotgun and you call it hand cannon.

Apparently his employees were eager to meet this new requirement and earn their own 4/10 judge pistol.

Toland said after hearing about recent home invasions and violent crime in the metro Atlanta area, he came up with the new office mandate.

“They all had their conceal carry permit within 3 to 4 weeks of me announcing that this was something you had to do,” he said. “With the presentation of their license, they all got a 4/10 judge pistol.”

Toland told Channel 2’s Craig Lucie he did it out of concern for his employees’ safety.

“I have a number of offices and most of my employees are women,” he says.

According to one employee who is thrilled with the new mandate, employees must be “willing to get the training, become an expert and if you pull it out, you have to be ready to use it.”

Not only is his new requirement a winner with his employees, but his clients have also expressed their support for the measure.

Toland has offices in Griffin, St. Simons Island and Atlanta where they insure aircrafts worldwide.

. . . .  Toland says several high-profile business owners who have private planes he insures may follow his lead.

“A lot of my clients are high fiving when they hear this. They think it’s the best things for a company to mandate gun ownership and be responsible,” he said.

I like the fact that the boss supplies the gun too after they get their permit. Nice touch.

Not sure, if most employees are a woman, that is the best weapon to have. The recoil is pretty strong, and I have seen some undertrained shooters nearly blow their head off when the recoil knocks their hands back, and then they accidentally do a 2nd pull of the trigger.

(speaking of trigger, maybe this deserves a trigger warning for a potential micro-aggression, that it is in some way sexist to suggest that some women might have less muscle tone that would in anyway inhibit their ability to manage the recoil on a .410 caliber weapon, when I should refer to the general danger of muscle-fiber disadvantaged individuals in any of 50+ gender categories …)

Now, I have never shot a Taurus Judge (I think that’s the weapon referred to here), so my concern may be unfounded.

However, that gun safety comment aside, I think this is an excellent idea.

(other legal disclaimers: If implementing this program, just screen your employees carefully and make sure that when you transfer that weapon, you don’t run afoul of any Obama EOs designed to trip you up, and be careful what this does to you firm’s liability insurance. I am sure progressives will be looking for an angle to make this difficult in case it catches on).

(oh, since everything has disclaimers and trigger warnings and actual triggers being discussed, this is undoubtedly an example of patriarchal repression of the mostly woman employees. why? dunno. Some Anita chick at Twitter said so.)

A Smith & Wesson M&P SHIELD™ .40 S&W works just fine for me. The recoil is straight back and not a problem.

That weapon is a beast. I am a big guy and I did not enjoy shooting it. It wasn’t especially accurate either. While it looks intimidating a hand cannon like that is probably not your best bet for indoor self defense.

BTW a 410 is nothing to sneeze at. My uncle killed a Kodiak with one.

The Judge is actually pretty manageable if you have a proper grip. I’ve taken mine out to the range to let students shoot and no one has had a problem with it.

His employees can carry whatever firearm they wish but he gives them a Judge once they obtain their concealed carry permit. I personally wouldn’t attempt to use a Judge as an everyday carry, I don’t have the proper frame to hide it but it makes a great truck gun.

Based on the report, most of them don’t try to hide it; they’re open-carrying.

Their business is aircraft insurance; it follows that they’ll be around or near the items they’re insuring. As I said below, there are plenty of reasons that someone who works around/near aircraft might find a gun that fires shot pellets preferable to one that fires bullets.

Good on ya. I would leave that cannon in the drawer for in-office security. I prefer to carry lighter and slimmer. An armed society is a polite society.

So when does the Alinsky style demonizing begin? The intolerant leftists can’t just sit back and let somebody defend themselves. Besides, this becomes an unsafe zone for criminals (aka soon to be Democrat voters — maybe).

Good story, but it would be better if he let employees pick their own gun. A Taurus? Seriously?

As far as we know, they can carry whatever they want; this is just the gun he presents to them.

That said, there are plenty of good reasons that someone who works around/near aircraft might prefer to carry a gun that fires shot pellets, as opposed to bullets.

The reason it’s called “The Judge” BTW is because judges in Miami, Florida started carrying it under their robes for self-defense.

Strictly speaking, it can also use a .45 cartridge, or, being a revolver, alternate the two.

Specifically, it’s a .45 LC (long Colt), not to be confused with the .45 ACP commonly found in magazine-fed semi-automatic pistols.

Leaving the issue of the chosen weapon, let’s get to the important aspect of this program. By arming his workers and making possession of the weaponry “mandatory”, the owner of the business now makes his company and/or himself liable for the action of his armed employees. This, as the Law Enforcement community and local government has found out, this results in substantially increased insurance costs, or the inability to actually obtain insurance. The problems arise from improper handling of the firearms, which may result in injury or death, improper use of the firearms, improper storage of the firearms, resulting in theft which can result in injury or death to a third party, and the list goes on. It is fine for a business to have such a policy, if they choose. But the increased costs and potential legal ramifications are the reason why most businesses restrict the possession of firearms in the workplace. We’ll have to see how this works out, over time.

Your position sounds like saying that installing fire extinguishers should drive the price of insurance up, because of the potential liability if an improperly mounted unit should fall on someone, or if someone should pick up a unit and use it to brain someone else.