Biggest crime? Not being in the right political office. 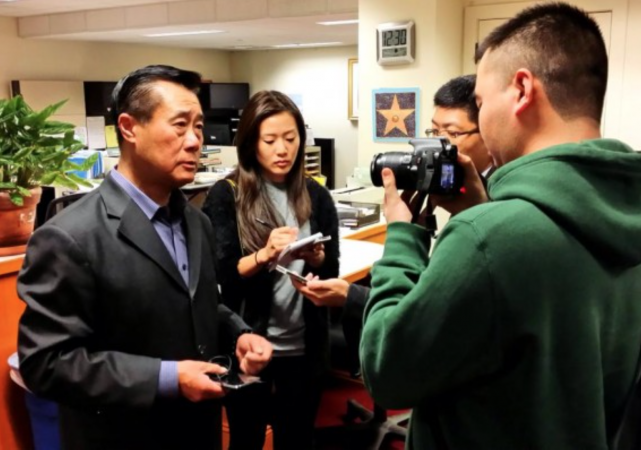 About 2 years ago, I featured a legal saga involving a California state senator from the Bay area who was a leading advocate for gun control.

In exchange for campaign contributions, according to the affidavit, Yee would “facilitate a meeting with the arms dealer” so that the donor could buy a large number of weapons. The firearms would be imported through a port in Newark, N.J. At one meeting, the affidavit said, Yee and the prospective donor discussed “details of the specific types of weapons.”

The deals were facilitated by a Chinese gangland figure nicknamed “Shrimp Boy.”

The wheels of justice have been slow to grind, but grind they did. Leland Yee was charged and convicted of soliciting and accepting bribes in exchange for providing political favors and conspiring to import weapons and ammunition into the country.

He has just received a 5-year sentence, after throwing himself on the mercy of the court.

…Wednesday, after decades as an elected officeholder, he was sentenced to five years in prison for doing political favors in exchange for campaign cash — or, as the judge put it — for selling his vote.

During an hourlong hearing, Yee implored U.S. District Judge Charles Breyer to be lenient. Standing at a lectern near his lawyers, Yee said he had taken responsibility for his crimes and knew that he had shamed himself and hurt his family, his supporters and others.

Yee also told the court that his wife was severely ill and needed him to care for her.

The judge was not moved.

Senior District Court Judge Charles Breyer in San Francisco imposed the sentence after the 67-year-old Yee pleaded guilty in July to one count of conspiracy to engage in racketeering.

“I don’t feel I should be lenient,” Breyer said during the hearing. “The crimes that you committed have resulted in essentially an attack on democratic institutions. We all deal with the situation that we in our work must be accepted by the public as having done an honest job.”

At least we have a sense of the scale of politician who is not too big to jail. Arguably, Yee’s biggest crime was not being in the right political office for his ambitions.

Only 5 years? Such malfeasance by an elected official should be a capital crime.

That might actually slow down the spread of corruption in government!

“The wheels of justice have been slow to grind, but grind they did. Leland Yee was charged and convicted of soliciting and accepting bribes…”

Despite all the other headlines to the contrary, I’m grateful for whatever few reminders that this is still a functioning Republic.

Amazing that the justice system worked. Gives me some renewed faith!

The AP report on the sentencing, at least originally, made no mention whatsoever of Yee’s political party – Name That Party! – in about a 700-word piece. The accompanying picture caption had a “(D-SF)” but pictures and captions are typically selected by an editor, not the writer – and in any event, even the editor did not see fit to include a word on it in the nody of the report.

I wonder if Hillary will lose her affiliation, too, when they frog-march her away.

They NEVER list the party of a corrupted politician when they are Democrats. But if he’d been a Republican, the article would have started, “Republican politician so-and-so….”.

It happens so frequently, the only logical conclusion is a coordinated effort on the part of the mainstream press. No other explanation makes sense or holds up to scrutiny.

I hope your cell mate is 6’5″ 280 lbs. convicted on a bogus gun charge with an insatiable sex appetite.

Gosh, Mil, you’re the only person mentioning rape. Haven’t you ever seen a cat play around with a mouse?

Wylde Byll’s meaning was as clear as Bill Lockyer’s, and we were all outraged at that. It was just as disgusting and unacceptable now. Rape is not funny, and it is not something to make light of. Ever. People who are OK with rape have no place in polite society. And that includes you. So get lost.

He should have gotten a much longer sentence. He was an avid gun banner during his time in office.
I think he got off easy because he was a democrat – the party of criminals.

Wiki (notice the shoulder launched missile and the automatic guns, machine guns in other words)

Yee was arrested by the FBI on March 26, 2014 on charges related to public corruption and gun trafficking — specifically buying automatic firearms and shoulder-launched missiles
——-
He is an award-winning gun control advocate
————
Yee has been a vocal advocate for gun control. In 2006, Yee was named to the Gun Violence Prevention Honor Roll by the Brady Campaign for his efforts that included co-authoring a first-in-the-nation bill to require new semiautomatic handguns be equipped with ballistics identification technology known as micro-stamping.[3] In May 2012, together with Kevin de León, Yee proposed legislation to ban any semi-automatic rifle that used a bullet button that makes the rifle a “fixed magazine rifle.” SB 249 would ban conversion kits and rifles. According to his press release, “Absent this bill, California’s assault weapon ban is significantly weakened. For the safety of the general public, we must close this loophole.”[39] Yee is quoted as saying, “It is extremely important that individuals in the state of California do not own assault weapons. I mean that is just so crystal clear, there is no debate, no discussion.”[40]

As near as I can find, the most he could have gotten for conviction on a single count was 10 years…

… by which we can assume that a Democrat in higher office might get off with two years, or a small fine.

As much as I’d like to see him get more — especially with his anti-gun hypocrisy on full display — five years is a reasonable compromise.

Oh yea, the Anti-Gun Arms Dealer. I wouldn’t worry to much about him, depending on who he was involved with when he got caught he may never make it out of prison.

“The wheels of justice have been slow to grind, but grind they did. Leland Yee was charged and convicted of soliciting and accepting bribes in exchange for providing political favors and conspiring to import weapons and ammunition into the country.”

So, according to this, Yee wasn’t convicted on any gun charges. Yet another example of this administration’s failure to prosecute actual, serious firearms crimes, while promoting every new gun law, aimed at law-abiding gun owners, as necessary to “keep guns off our streets.”