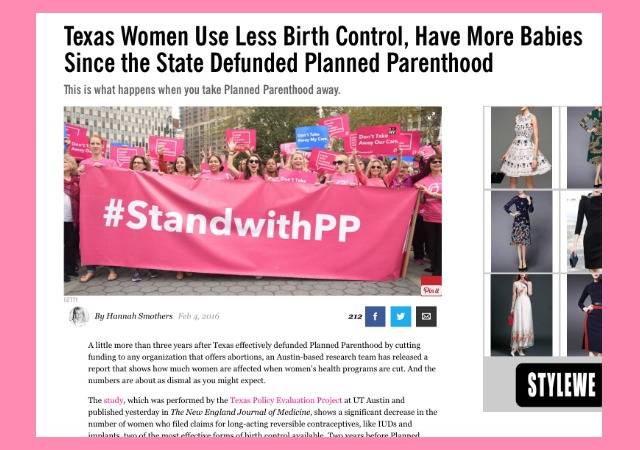 They argue that restricted funding to Texas-based Planned Parenthoods “effectively defunded” the abortion mill. As a result, few claims for contraceptive measure have been filed and more babies have been born in locals where Planned Parenthood is no more.

Like many other anti-life advocates, the post’s author seems to dwell under the presumption that the only way women are able to receive medical attention is via Planned Parenthood. Forget there exist these nifty little things called “doctor’s offices,” “clinics,” and “hospitals,” all of which are staffed with doctors whose medical knowledge extends beyond dismembering a baby with a vacuum hose.

Two years before Planned Parenthood funding was cut from the program on Jan. 1. 2013, 1,042 women filed claims for LARCs under the state’s Medicaid Women’s Health Program. By the end of 2014, that number dropped by 35.5 percent, to a mere 672 women. Those figures are just as bad for women who use injectable contraception — within the same timeframe, those claims dropped from 6,832 to 4,709 (or by 31.1 percent).

Unsurprisingly, the study shows a 1.9 percent increase in the birthing rate in counties that once had state-funded Planned Parenthood clinics during that same time period of 2011 to 2014.

If there were any remaining doubts about how cutting Planned Parenthood funding affects women, those should be pretty much cleared up by this new data. When Texas removed Planned Parenthood from its state Medicaid family-planning program, low-income women who qualified for the program were no longer able to afford some of the most highly effective contraception options. And the subsequent consequence was an uptick in the birthrate.

Combine all of this with the fact that Texas politicians have done pretty much all they can to make abortion nearly impossible to access in the state, and you have a lot of low-income women who can not only not afford birth control but don’t have a way of safely ending an unwanted pregnancy.

How DARE those babies have a chance to live! Don’t they know how inconvenient they are?

I imagine our foremothers are rolling in their graves as modern “feminists” pride themselves in advocating for the murder of unborn women.

In a really narcissistic and ME culture, there is NOTHING more threatening to that whole mind-set than a baby.

They’re like a lockable garland of garlic to Dracula. Powerful, and kinda smelly, PLUS they’ll usually kill the old selfish blood-sucker you, and in its place put an adult. Not always, certainly, but the DO tend in that direction.

I moved to Texas on Tuesday. Texas fighting PP? Good for a Texas. As G. K. Chesterton would say, birth control is about neither birth or control.

The spike in babies has everything to do with the wave of Central American anchor babies Obama unleashed 2 years ago.

It has nothing to do with PP

Got support? Or is this just another of your idiot assertions?

The fertility rate in Texas is pretty high compared to other states. (2.09 in 2014) It is higher than last year and not surprising, given the economic climate.

So between illegals dropping anchor babies in response to the prospect of at the least strict enforcement of our immigration laws and some growing confidence of future stability (true or false confidence doesn’t matter), more babies are being born. It doesn’t seem to have any relationship to PP at all.

The more interesting question is how did PP come to their conclusion? Was a scientific study done? If so who did it? If so then has it been duplicated?

After all this corporation has nothing to gain by lying or bending the facts. It’s not like there’s money on the line.

Where is Dr. Carson campaigning today?

Unsurprisingly, 1.9% is likely within both the margin of error and natural variability.
I am surprised that Cosmo is unaware of the infections and damage IUDs can cause. As well as the adverse reactions that some women get from the implants and shots.
The “study” shows no change in the usage of BC pills.
Over 13 million women in TX at least half of child bearing ages(6.5 million) The “study” shows that 2,493 fewer women got long term BC, less than 1 per 1,000. TX birth rate is around 70 per 1,000. All of those women getting pregnant would not raise the birth rate 1.9%

“Two years before Planned Parenthood funding was cut from the program on Jan. 1. 2013, 1,042 women filed claims for LARCs under the state’s Medicaid Women’s Health Program.”

Why did they pick 2 years? Does their narrative collapse if they pick some other starting point?

Gosh… how on earth have I managed to survive all these years without ever visiting a planned parenthood or having an abortion? I guess in the eyes of Cosmo, I’m oppressed!

Let’s see. Single women have wanton COSMO endorsed sex and then get pregnant. The single mothers then place their baby onto the “Me first, you are baggage, baby” altar encouraged by the feminist COSMO lifestyle. The baby is then submitted to a deadly saline solution to become a child sacrifice to Athena, goddess of feminist stereotypes.

PP is just there to make sure your body parts are healthy so that you can continue the child sacrifices. Moloch cares.

Texas women use less birth control cause like Sandra Fluke they demand that the State pay for it.
Shame on PP for not helping women with their “health problems” by distributing free contraceptives.
Oh dear that would cost them money instead of being able to sell “unwanted baby’s” parts and make money to pay for upstyle living of those working for PP.
What a scam.
Isn’t it more moral to be a tree-hugging humanist and scrounge from industry?

Excellent article Kemberlee! I completely agree. And might I add Planned Parenthood is exactly like the Nazi’s in World War II Germany, murdering and dismembering those that are “inconvenient” or “unwanted”. Well done.

Feminazis for choice – as long as the choice is “no baby,” of course. That’s not news.

So, enter Zika and Cosmo. The Left needs “War on Women 2016,” and what could be better than anti-PP Republicans forcing women to have too many kids, and forcing them to deliver deformed kids?

Malthus, Darwin, and the eugenicists would be pleased with our brave new society.

There are literally hundreds of non-profits in the Progressive Industrial Complex that could fund chopping up preborn children into tiny pieces if they want to.

The expenditures of just the Gates Foundation alone, as mentioned about $3.5 billion, is 7x more than the $500 million Planned Parenthood gets from taxpayers. So the Progressive Industrial Complex could easily fund PP if it wanted to. But by making taxpayers fund $500 million of PP’s annual budget, the Progressive Industrial Complex has more money it can use to move the country Left in other areas.

I also think the left gets enormous psychic satisfaction in making the people who oppose chopping preborn children into tiny pieces pay for it with their taxes. Making them pay for it via taxation is giving a middle finger to their moral beliefs and opposition.

Whether it’s #CecileTheExecutioner or #CecileTheCannibal, the “final solution” and clinical cannibalism have traditionally been embraced by progressive moralists in both
advanced and primitive states of civilization.

This is not merely a semantic quibble, but, technically, it’s reactive parenthood. And clinical cannibalism services seem to be an ad hoc supplement to the business model that distinguishes the Planned Parenthood corporation from others in the industry.

That said, make abortion, not life… because everyone is entitled to have a sincerely held faith in spontaneous conception, selective-child, or whatever, pulled from the dark fringes of a penumbra. The female chauvinists, contract executioners, state’s tax collectors, and democratic leaders will not be denied.

Wait until they find out the family planning practices of Muslims.
Oh, right, they don’t count.