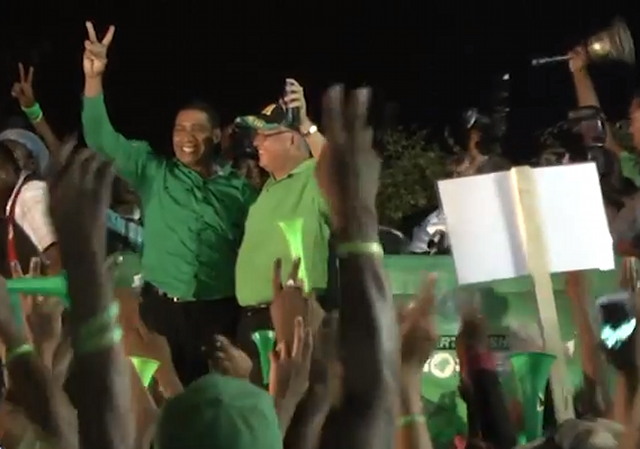 Liberal and conservative mean different things in countries outside the U.S. but in Jamaica, the only party that resembles what we would call conservative is the Jamaica Labour Party.

The website Discover Jamaica describes the JLP this way:

The JLP is considered the more conservative and consistent party and has always espoused the free market system. During the 1970s and 80s it was vehemently anti-communist and pro-U.S.A.

The JLP just won control of the nation’s government by running on job creation and tax cuts.

The Jamaican Labour Party (JLP) led by Andrew Holness had won 33 of the 63 seats with almost all votes counted, according to the electoral council website. Prime Minister Portia Simpson-Miller’s party took 30 seats.

The sound of airhorns filled the JLP’s headquarters in Kingston as a jubilant crowd of supporters in the party’s signature green waved flags and partied to dancehall music, including a song called “Bye bye Portia, bye bye”.

“We will grow the Jamaican economy. We will create jobs. We will give you an accountable and responsive government,” said Holness, 43, adding that his government would address a laundry list of issues from water to housing and healthcare.

“Our mission is to move Jamaica from poverty to prosperity,” he said as supporters rang bells, a party symbol.

Here’s a video report from the Jamaica Gleaner:

Here’s more from The Gleaner:

Despite the cheers, JLP Leader Andrew Holness soberly took the stage at the party’s Belmont Road, New Kingston, headquarters after the party he leads secured victory in the polls.

“I want to thank God for this victory and the people of Jamaica for investing in me the opportunity,” he declared.

“It has been a long journey.”

Added Holness: “We have carried a message and the people of Jamaica accepted our message, but this is not the end, it is just the beginning.”

The JLP leader promised that the Government he would be leading would change the way things are done as “we have been given stewardship of the country and we stand to be held to account. That is the cost of victory”.

I feel a song coming on…

I hope they can fully realize the immense benefits of the free market and become the Hong Kong of the Caribbean.

Amen! Their new leader sounds well grounded and clearly realizes this “is just the beginning” of the journey. (If only our candidates seemed as level-headed!)

Here’s a link to another recording of that great song performed live in Jamaica.

(If you listen to the other segments of that live performance, the young lady, Nikki Yanofsky, not only sings the Bob Marley tune, but everything from Billie Holiday and Duke Ellington to Jimi Hendrix. She’s very talented singer, even better these days, and only 14 at the time of that performance.)

now if only we could try this in America …
we have a conservative candidate ..
Cruz … but the GOPe is gonna have Marco “gang of 8” Rubio
and will probably get Trump .. and Hillary will be president.

And up here—this is what I see: