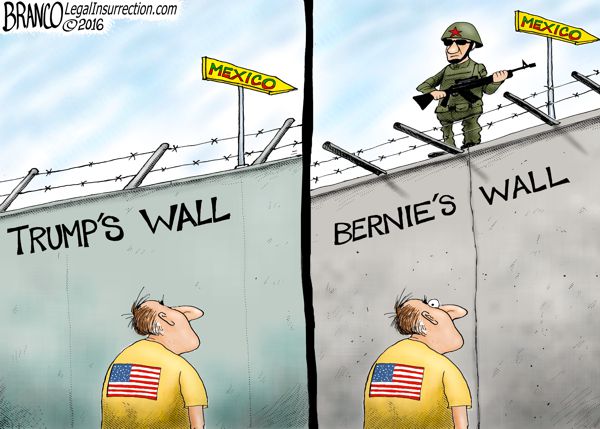 The cartoon is a hit on Twitter! Well Done Branco!

I love it. Point well made.

Wish you could you draw a version of it with the second panel saying Canada instead of Mexico so I can send it to my friends in Vermont.

I’m sorry, I don’t get the meaning of the cartoon. Would someone kindly explain it to me. Thanks.

The Trump Wall has barbed wire keeping people from Mexico entering this country.

Bernie is a socialist, read that as “communist”. Communist countries are so oppressive they Must have walls to keep their citizens from fleeing. That is why Cubans will make rafts from car tires and float across more than 90 miles of shark infested waters. That’s why Mexican citizens with any gumption at all will cross miles of hostile territory to try to get here. Notice the Bernie wall has a man with a gun facing in, that man with a gun has a red star on his hat.

The Berlin Wall wasn’t to keep West Berliners out of East Berlin, it was to keep East Berliners from escaping to freedom. If you were shot by the East German guards while escaping that wall, shot but not killed, they would wait while you died before collecting your body.

Ok, thanks. Appreciate your explanation.

The problem is not just what you were taught in school, but what you were not taught. Public schools rarely teach about the evil of socialist/communist governments.

Re murdering the people you govern: compared to Stalin and Mao, Hitler was a piker.

Hitler is vilified far more than Stalin or Mao because of the ethnic/religious focus of the mass murder. Stalin and Mao’s mass killing was political in nature, so to the Marxist sympathizers in Academia, “unfortunate, but necessary” for the success of the Revolution…

The wall does not need to be built. Only the threat of its construction may be sufficient to force countries to address the causes for mass exodus (e.g. refugee crises) of their citizens. That’s one issue. The other is domestic interests that sustain the humanitarian disaster through passage and defense of anti-native domestic and foreign policies.

Sorry, but the wall does need to be built. Just a threat won’t be enough for countries like Mexico to curb illegal immigration to the U.S. Why? Because illegal immigrants sending money back is a HUGE portion of their economy.

I saw headline on drudge that said Mexico receives more from remittances then it does from it’s oil industry.

Saw that, too. There’s no way Mexico will willingly shut off that much cash flow. It would be economic suicide.

The wall needs to be built. Any other form of “border security,” has proven to be a scam.

The bush administration was spending billions on electronic sensors and drone flights and accomplished nothing. Worse, they bought the tech, but prevented the tech from being used by a purposefully understaffed ICE.

The wall is a physical barrier that will survive broken promises and betrayals that the Republicans continually do. Only the pro immigrant half of Reagan’s compromise was ever upheld.

Recently, Republicans in congress passed legislation demanding a wall, but refused to fund it, which allows them to lie to their constituents. Does anybody remember John McCain’s TV ad “Just build the dang fence?” As soon as the election was over, he started calling people who wanted that fence built racists.

One of these days in the future, a Republican Senator will get caught tapping his feet in an airport bathroom stall and the Democrats will win a landslide election. When that happens, at least a wall will exist.

And, one way or another, the wall will be built.

It will be either be built now, along the sothern border, or…. Every city in the country will have their own separated walled enclaves separating Elysium from the surrounding gang controlled wasteland. That’s how South America and South Africa operate now. Google the walls of Lima, or São Paulo for What the future will look like.

Oh and Ted Cruz, who says to build the Wall and he “has somebody in mind to build it,” is a disgusting sellout liar on the issue.

He wants the popularity of the issue, but his campaign website says he only wants to build 60 miles of Wall, a meaningless token effort.

A Trump wall is 30ft high and 1000 to 1500 miles long Cruz only talks about fencing and border security. The exact same language as John McCain.

When Cruz announced for President he gave two sentences to immigration and two words to the border. “Border Security”. The words from Cruz’s announcement speech are indistinguishable from the open borders crowd.

Cruz lies about so many things, the “wall” is just one more of the things he and the cruzbots LIE about.

“He has NEVER discussed buidling a Trump wall.”

Well, no. That’s because…

ALLLLLLLL T-rump has done is TALK about building a wall…since he became a campaign conservative on immigration in July. Two years ago, he was FOR the Gang Of Eight.

In addition to being a moron, you’re a lying SOS.

Cruz was advocating a wall years before Der Donald.

People can read the Cruz position paper, and see what a lying asphole you are.

It certainly hasn’t been part of his campaign.

Meaning…he never seems to mention it while campaigning.

What you mean is that you don’t hear it.

Because it isn’t in the news, don’t make the cardinal error of thinking it hasn’t happened.

Very poignant cartoon. Love the reference to the Berlin Wall. That’s exactly what’ll happen if the country elects Socialist Sanders. Folks with means aren’t going to stick around to be taxed 90%…

Where’s the big, beautiful door for the deported illegals to get their fast-track re-entry? (Trump will still need people to staff his hotels and tend his golf courses, and he can’t rely on H1-B visas for everything.)

When does Trump talk about liberty, or about returning the federal government to its constitutional limits?

He really doesn’t. Someone who cared about our constitutional liberties would not have been helping Democrats get in power and stay in power for most of his “adult” life. He wouldn’t have helped Harry Reid (just for example) against a Tea Party challenger.

Trump had high praise for the quasi-Marxist Obama. More recently, Trump said that the Castro-loving Bill de Blasio would be a good mayor and make New York great again.

Trump doesn’t want to restrain the power of government over our lives. He just wants to be in charge of it all.

Plus, he’s no less an advocate of a COMMAND economy than is Bernie Sanders.

Don’t take my word for it. Research his recent comments on trade, the oil, phama, insurance, and defense industries, etc.

If we don’t get the Trump Wall built and don’t get legal and illegal immigration right, worries about the constitution won’t matter BECAUSE we will have lost our country along with those constitutional principles.

Trump is the ONLY candidate that will FIRST DEFEAT THE INVASION.

But we knew that. Months ago.

Der Donald is the only GOP candidate with economics indistinguishable from Sanders.

And that is the truth that anyone can research. Der Donald has said it.

Wall by Trumph, the insecure candidate.

(next year Trumph wil decide to do a Bernie on you. Just you wait and see.)

Excellent cartoon Branco, as always.
I still say, though, that if we eliminate the Socialism it will fix the problem (and many others) without building a wall and we’ll be a shining beacon of hope for the rest of the World like we once where.

The socialist wall has a big crack in it. Symbolic, perhaps the inevitable, fatal flaw of socialism itself? Another candidate for best of 2016!