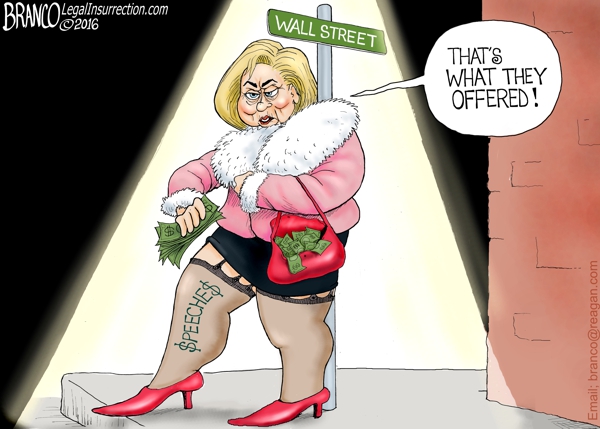 Great cartoon. One suggestion: a run in the left stocking.

I think it is perfect as is.

But, if I were to add something, it would be Bill dressed as her pimp in the background dressed in a harsh yellow zuit suit casting a blue shadow shaped like a dress.

Another suggestion: Bernie Saunders in the background, getting all the business from johns.

Then on the other side of the spectrum there’s the Slovak Roma (gypsy) street walker who came home in the morning after a hard nights work and gave her husband 101 Crowns…..the husband incredulous, said….”Why who would pay 1 Crown for sex”…and the wife replied….”Why everyone”.

The only question still unanswered about another Clinton presidency is how much it would cost to rent the Lincoln bedroom for a night.

The strumpet looks like she pigged out on the crumpets.

She just had to take it because they offered it?

The sad part is, her “followers” won’t pause for about 2 seconds and realize absolutely everyone Hillary accuses of being “corrupted” by corporate money could give the SAME ANSWER, with IDENTICAL “legitimacy”.

The woman is so arrogant and ego-maniacal she doesn’t even TRY to “make sense”. Because she doesn’t HAVE to. She’s got MORONS claiming that NOT supporting HER should land you in hell.

How does anyone see anything “respectable” in this woman?

Outstanding. That cartoon is truly worth a million words.

The only difference between politicians like Hillary and the common street walker is how much they are paid and which orifice they use.

Bill Clinton is out jogging around in some of the seedier areas of Washington D.C. He notices a good looking prostitute. She sees him and calls out, “Fifty dollars!”
He’s tempted, but the price is a little high so he calls back, “Five!”

She’s disgusted and turns away while Bill continues his jog. A few days later, he finds himself jogging in the same area and as luck would have it, the prostitute is still there. But she won’t come down on her price. “Fifty!” she shouts.
Bill answers her, “Five!” No sale.

About a week later, Hillary has decided that she wants to get into shape so she demands to go jogging with Bill. They get to the seedy part of town and the same prostitute is still there. She eyes Bill and Hillary together and yells, “See what you get for five dollars!”