Back in the Big House 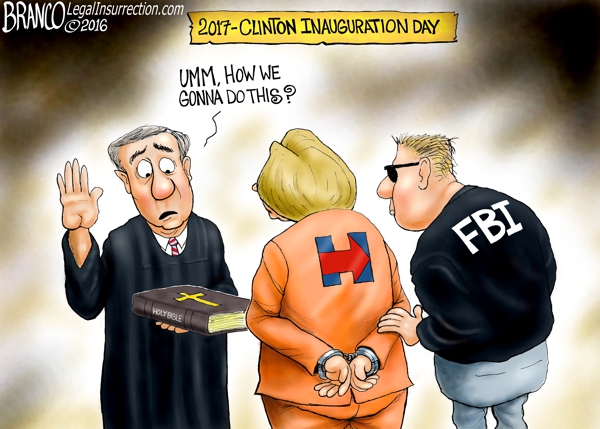 It’s a nice dream, but they’ll never arrest her. Laws are for the little people (the little white people, not the little brown people).

Not gonna happen.
Buraq Hussein Obama (“Donald Trump will not be elected President!”)who learned his political skills at the Chicago School of Poly Sci from Professors Al Capone, Johnny Torio, “Bugsy” Moran, Saul Alynski, and Frank Marshall Davis will still have his hands on the wheels and levers of absolute power in America.
Hillary, despite her over 1800 documented incidents of mishandling classified information will skate, ‘Lew Alcindor’ would never have indicted her while he was still in office, Trump will be perp walked by ‘Lew’s” successor.
“The most transparent presidential administration Evah!”

Have to agree with this. I have no doubt she’d be swiftly indicted if Joe Biden had decided to run. Since he didn’t, though, Obama has to protect Hillary. She’s the Democrat’s only hope.

That’s a sad commentary in and of itself…

Well done. Love the orange as always. It “suits” her!

BTW, Mr. Branco, is there anyway you can draw a similarly themed political cartoon using her “H” in the phrase “white privilege.”

Hillary: “I try to tell the truth (cackle, snort) but truth gets in the way of Progress. How’s that for an answer.”

Need to add some barking.

Trump used the same “I try” line in response to legal questioning, but to Trump fans, that was different. They’ve proven that they think the rules should be different, or nonexistent, for Trump.

I don’t know why people keep saying that. If Trump is President he’ll have the MSM out in force against him, he’ll HAVE TO toe the legal line or he’ll be pilloried in the press. And Congress would have NO problem what so ever impeaching him if he so much as looks cross
eyed at illegality. Unlike our current President who can do whatever he wants. Remember, Trump won’t be the First Black President.

If on happens, the other will not. Personally, I am waiting for the day on the news we see the video of her “perp walk”!

The only way this would ever happen is if she were a republican, BUTT, I just couldn’t help but visualize the thought of it. LOL

It’s ok to have dreams.

Justice Department officials used “prosecutorial discretion” to shelter former IRS official Lois Lerner from a grand jury after she was held in contempt of Congress. “I believe that in the exercise of prosecutorial discretion, the matter was handled and was resolved,” Attorney General Loretta Lynch told the House Judiciary Committee[.]

Lerner is just the beginning. The IRS dismissal, large enough on its own scale and importance, will be but a side event in this attorney general’s career. For the longer the Hillary email “scandal” plays out, the more protracted the discovery and analysis by the FBI, and the deeper into the campaigning and nomination process we go, the less likely any indictment of Ms. Clinton. It will likely involve a discretionary event by Loretta Lynch.