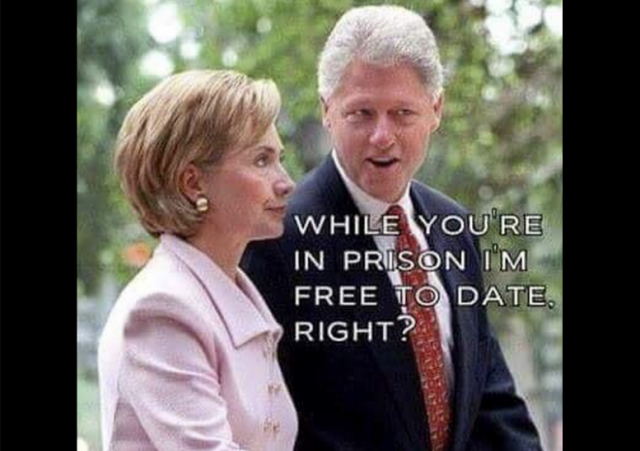 So, this is awkward. Awkward because everyone knows it’s true.

Prior to introducing Hillary at a campaign event earlier this week, former President Bill Clinton said, “the hotter this election gets, the more I wish I were just a former President and just for a few months, not the spouse of the next one, because you know, I have to be careful what I say.” Perfectly understandable.

Buuuut, that’s not where he stopped:

“Tonight, my job is to introduce Hillary. Sometimes, when I’m on the stage like this I wish I weren’t married, then I could say what I really think.”

What Bill really wants to say …

When was THAT any impediment…????

The Big He. Always classy. Not.

Sometimes, when I’m on the stage like this I wish I weren’t married, then I could say what I really think.

The press has been telling us for years that the old horndog is the consummate politician.

The press is, as usual, dead wrong. As we saw in his impeachment days, he was actually an oaf. If he’d resist the urge to open his mouth, it would be easier to keep his feet out. But he never learned. And, as we see here, he still hasn’t.

While we are on the topic of …marriage. I like the song the Prof. chose to dedicate to his wife: “You Are so Beautiful.’

For a Bill & Hillary Free Valentines Day, there is Chet Baker’s “My Funny Valentine” to slow dance to.

When Alice Roosevelt Longworth was informed that Franklin was cheating on her cousin Eleanor, she replied. ” Well he is married to Eleanor you know”
Well Bill is married to Hillary you know.
Hillary was at the doctor and told him she was dizzy and didn’t know if she was coming or going. He told her to walk across the room. He then told her to walk back to him. He told her he couldn’t tell if she was coming or going either..

When Bill said that, did he have his eyes on some attractive woman? Or did he spot Hillary glancing at Huma?