Are You Ready to #SettleForHillary?

Are You Ready to #SettleForHillary? 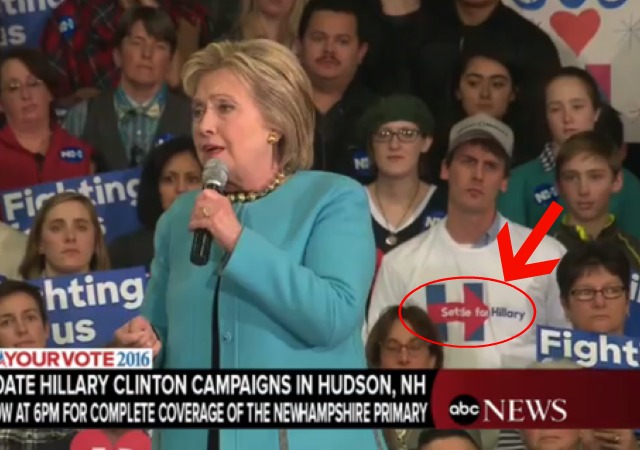 This is probably my favorite thing on the internet right now. Two dudes wearing “Settle for Hillary” t-shirts sat right behind the embattled Democratic candidate at a town hall event in New Hampshire. Aaaaaannnd no one seemed to notice.

It's New Hampshire Primary Day! If you're with Hillary, let her know why by tweeting #SettleForHillary pic.twitter.com/OJK8vf0mAG

#SettleForHillary is the worst best decision this dude has regrettably yet stoically endured all week pic.twitter.com/U3Z488ms4T

Easily some of the best trollery of the 2016 cycle thus far.

The Clintons are not amused. Yesterday, Bill Clinton bemoaned the “sexist” internet trolling of Bernie Sanders’ supporters. The self-awareness fail is not lost on us though:

To which some other progressive will no doubt tweet #KissMeYouFool

C’mon, you know what a pack of dogs are like. They enjoy the taste of the mess they make.

And perhaps, #Bottomfeeders for Bernie. The very fact that there are tens of millions of people who will vote for Bernie and Hillary depresses me greatly.

Overall, as a nation, I must say,

This is too funny! Thanks for posting this, Kemberlee!

So now we’re supposed to vote for “real change” after eight years of “change we can believe in.” What’s the difference?

Only if the alternative is Trump.

Trump fans have said things like “We might as well roll the dice with Trump” because the “politicians” done us wrong. Or “Things are so bad, we’ve got nothing to lose by electing Trump.”

So the Trump bandwagon weaves between a form of settling, and a bizarre superhero fantasy.

Why Settle For A Lesser Evil?

Hillary promises to continue Obama’s legacy – of lying. She’s well on her way of exceeding the number of his lies.

Hillary used her un-secured email server just so it could be hacked by China and Russia. It’s another way she continues Obama’s legacy of weakening our country.