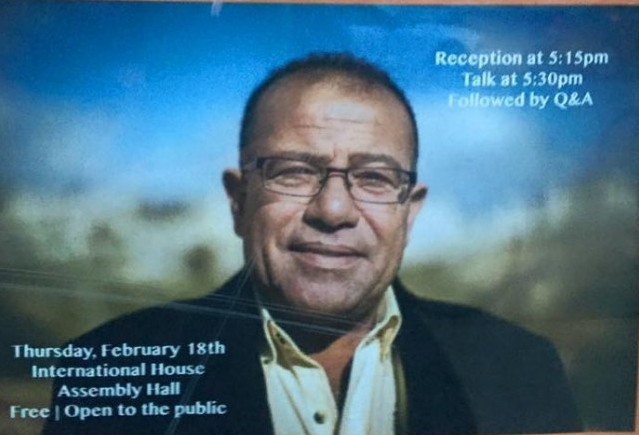 Bassem Eid is a well-known Palestinian Human Rights activist who has been critical of human rights abuses and corruption in the Palestinian Authority and Hamas-run Gaza.

Eid is an advocate of peaceful co-existence, and has made enemies in the Boycott, Divestment and Sanctions (BDS) movement because Eid believes BDS is harmful to Palestinians. He also criticizes the organizations that promote BDS as looking out for their own financial interests.

Here is a short interview which summarizes his views.

Eid is a frequent speaker in the United States, including on college campuses. Eid presents a Palestinian point of view not often heard on campuses, where radical faculty and student groups place all blame for the conflict on Israel.

While there is no doubt that antagonism to Israel has spread on some campuses, the BDS supporters increasingly are frustrated that the movement has not caught on more broadly. A study of 2015 BDS campus tactics found that BDS groups increasingly are engaging in disruptive tactics, particularly disrupting speeches and events.

It just happened to Bassem Eid at the University of Chicago. 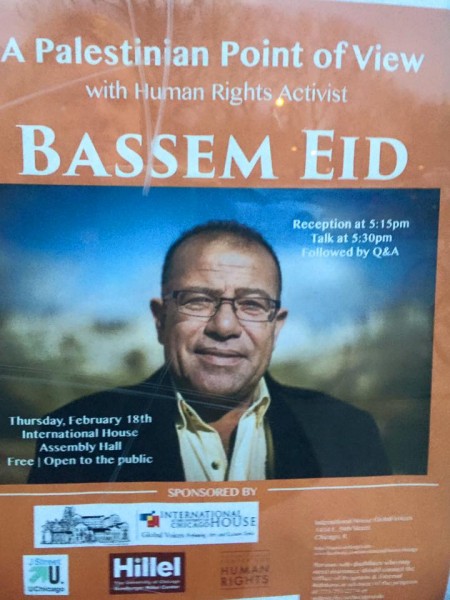 Palestinian human rights activist Bassem Eid recently delivered a lecture at the University of Chicago, where he faced threats and insults from a Palestinian from Gaza and anti-Israel Jews. In a video that was recently uploaded to Youtube, a J Street supporter, a pro-Palestinian Jewish alumna, a Gazan and others degrade Eid merely for not supporting their political agenda by outspokenly speaking out against the Palestinian Authority rather than Israel and they don’t give him the opportunity to answer. In the end, the lecture is cut short due to the disruptions.

“I was horrified by what happened at the University of Chicago,” Bassem Eid wrote on his Facebook page. “A Palestinian who claimed he was from Gaza threatened me. He started shouting and I had to escape from the place by the Police. It is horrible and unbelievable how the Arabs that support the BDS cause damage to the Palestinian reputation. But anyhow, I succeeded to deliver my message for an hour and a half without any interruption. Welcome to the paradise that is the University of Chicago.”

Here is the video, marked to start where the disruptions caused a quick end to the question and answer session. Three were some disruptions prior to this, but this was the most serious.

The audio is hard to hear, but it appears the person screaming threatened that future appearances by Eid would be disrupted: “We’re going to be there, get ready for it.”

This is not how Eid is greeted everywhere. He appeared at DePaul University in Chicago on the same trip, and other than a walk-out by some students, the appearance was not disrupted.

Update 2-22-2016: Vassar College public relations reached out to me and asked me to note that Eid appeared there recently, “was cordially received by roughly 70 people who both agreed and disagreed with his analysis. No one walked out.” Happy to make that addition. So much has gone wrong at Vassar that the Eid appearance was a welcome exception. My understanding is that Eid’s appearance was arranged through pro-Israel CAMERA’s student fellow at Vassar.

It’s a marvel this guy is still alive.

They haven’t figured out a way to blame his death on Mossad or the IDF.

I didn’t see the notice of the event otherwise I would have been there with a camcorder. Most of the ‘on-campus’ events aren’t advertised in the medical center / biomedical quad, even though we’re right across the street.

“A Palestinian who claimed he was from Gaza threatened me”
Arab Muslim or Gazan. Palestine is not now, nor has it ever been a country. There is no “Palestinian” language, or culture. There has never been “Palestinian” currency.

Until 1964 when Egyptian gangster Yasser Arafat created the PLO, they considered themselves “Syrians”.

No, they stopped with the “Syrian” thing in the 1920s, when they saw that they weren’t getting anywhere with it. They accepted that “Palestine” was now separate from Syria, and started demanding that it be Arab.

University of Chicago- a non-Free Speech zone.
Why am I not surprised?

Key takeaway is a J Street supporter is heckiling a Palestinian who isn’t 100% in the tank for terrorists. But they say they’re “Pro Israel” so they must be!