Unable to deal with the pathologies of the Middle East 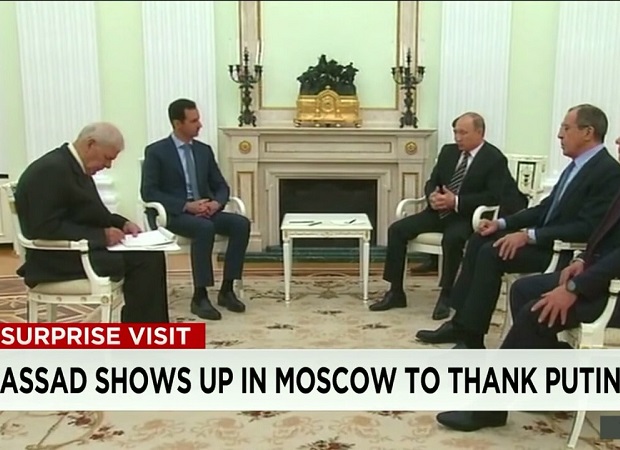 With each passing day, it gets more and more difficult to ignore the monumental disaster that Obama’s foreign policy actually is. Nowhere is its utter failure more glaringly evident than in the Syrian Civil War.

But first, let us not underestimate the pathologies of the Middle East that have led to the present disaster in Syria, but Obama administration’s policies have created perils that we would be dealing with, in decades to come.

Five years into the conflict, Syrian Dictator Assad is only hanging on to his power thanks to the massive military and political backing from Moscow and Tehran. With the help of Russian military support, Assad is now redrawing the frontline to his own advantage. As Assad lays sigh of rebel stronghold Aleppo, the “moderate” rebels now look to be on their last legs. So far, Assad has been more inclined squeeze the “moderate” rebels, whom he considers as soft targets, than to go after the evil of Islamic State.

By betting on his stooge Assad, Russia’s Putin is looking more and more like a winner. Putin’s gains comes at a cost to the U.S. and its Western allies. The debacle is so great that even the mainstream media cannot afford to ignore it any longer.

In a recent article, London-based Financial Times attacked Obama administration of a “bungling mix of action and inaction” that “opened a vacuum into which Russia opportunistically leapt.” Financial Times writes:

After Russian president Vladimir Putin sent his air force into Syria in September, the tide of war turned in favour of Bashar al-Assad, whose regime had started succumbing to Sunni rebels over the summer. It was plain from the outset that Russia was targeting this threat — not the jihadis of Isis. What is abundantly clear now is that Moscow is eliminating any alternative between the regime and Isis, razing the liberated areas of Syria that might nurture one, and driving out a new surge of refugees who have run out of places to hide. Mr Putin is going about this systematically.

For five years Syrians have suffered as the Assad regime bombarded hospitals, schools and bakeries, attacked water and power supplies, and obliterated rebel-controlled civilian enclaves. But much of this barrel-bombing and shelling was indiscriminate. Russia is discriminating carefully in its targeting of civilian infrastructure. For Mr Putin, evidently, Aleppo is no different to Grozny.

Some Arab leaders, with bitter resignation, point out that the Russian president is nonetheless heading for a Pyrrhic victory. If he and his allies — mainly Iran-trained and led militias — succeed in encircling Aleppo, he will have salvaged for his Assad clients a rump state in western Syria. The rest of the country will be a wasteland dominated by Isis, on which the Russians and the regime have barely laid a glove. Neither legitimacy nor stability will follow. The Assads will still head a minority regime; and although the population will have diminished sharply, it will still be overwhelmingly Sunni. The chronic manpower shortage of the government’s forces, made up for now by Hizbollah paramilitaries, Iranian revolutionary guards and other Tehran-aligned fighters drawn from Iraq and Afghanistan, will not change.

The article also debunks President Obama supporters’ claim that the administration was justified in staying out of the Syrian conflict, saying “[President Obama in fact] did get involved,” reminding the readers of the “red line” U.S. President had set for Assad in August 2012, if the dictator was were to used chemical or biological weapons.

All the tough talk from the U.S. President came to nothing when Assad actually went ahead and used the deadly nerve gas against his people, killing more than a thousand people in an attack back in August 2013 – exactly one year after President Obama drew the now-infamous “red line.”

As Director of National Intelligence, James Clapper, told a Senate committee last week; Assad had not parted with his chemical stockpile, and continues to use them on the battlefield in blatant violation of the international agreement reached in the aftermath of Assad’s deadly chemical attack.

Syrian Dictator knows that as long as President Obama is in the White House, he can get away with anything. The tragedy and the farce of it all is that even a third-world dictator is now able to call Obama administration’s bluff.

I really hate it when there is a man in the Kremlin and a wannabe in the White House.

I want my Reagan back!!!

It seems like the CIA is doing one thing, the state department another, and the military a third thing.

Meanwhile, Russia, with a thousand years of experience dealing with neighboring Muslims, seems to know what it is doing.

Once Obama’s red line threat was ignored, U.S. policy was discredited. The best thing now would be to work with Russia to eliminate ISIS after Russia consolidates its power in the country.

It makes a lot of sense: he’s a traitor.

Obama’s Mid East policy can be summed up in one sentence: “Anything to appease Islam.” In Obama’s opinion, this policy has been a resounding success. All death, misery and destruction in its wake is simply broken eggs for the omelette.

After all, Obama does have a Nobel Peace Prize.

You should add: ” – and destroy Western culture and bring any Jewish national interest to its knees.

US Foreign Policy has essentially been impotent since 2007 when Russia went on high alert, thus removing the US first strike capability. Because there was no push-back from Bush or Obama, Russia has been allowed to make any move they so desired.

The dismantling of the START treaty under Sec. Clinton all but assured Russian domination in both the Middle East as well as Europe.

Russian involvement in Syria is strictly to control naval deployments in the Mediterranean Sea and give the Russians direct access to the Med for the first time in modern history.

WWIII basically happened already and we lost. Unless there is a major economic/political event, US and therefore NATO influence over world politics is on a steep decline.

I think that title is more to the point.