Hide your kids, hide your wife 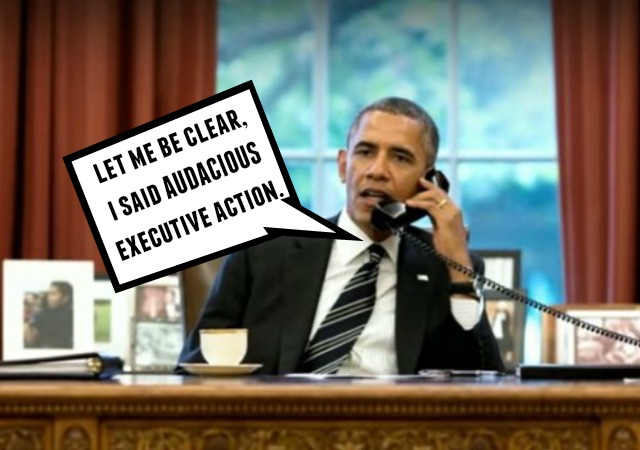 What better way to start the new year than a little “audacious” executive action?

White House Chief of Staff Denis McDonough told reporters at a Christian Science Monitor breakfast, “we’ll do audacious executive action throughout the course of the rest of the year, I am confident of that.”

The Hill has the story:

The comments are a clear sign the president will continue his go-it-alone approach, which has angered Republicans in Congress.

They also underscore how, aside from a handful of proposals such as trade and criminal justice reform, there is little chance for Obama to work with Congress in an election year.

Obama did not mention any possible executive actions during his State of the Union address Tuesday night, and McDonough did not hint on which areas the president will sidestep Congress and set policy on his own.

White House officials have warned the president could act on his own to close the military prison at Guantanamo Bay if Congress doesn’t approve a plan to do so. Such a move would surely trigger a showdown with lawmakers, who have passed laws barring detainees from being housed on U.S. soil.

McDonough said the White House is crafting its executive actions carefully to “make sure the steps we have taken are ones we can lock down and not be subjected to undoing through [Congress] or otherwise.”

The White House has said they will not take any further action on gun control, sort of. At least based on the current gun control debate standings. But they won’t rule it out either:

President Obama’s immigration reform via executive action was a flub (thanks to Texas), but that hasn’t deterred him from attempting to circumvent his co-equal cohorts on the Hill.

The end of the Obama reign might be in sight, but the fight is certainly not over.

Obama’s audacity of hope has the country at the end of its rope.

“The comments are a clear sign the president will continue his go-it-alone approach, which has angered Republicans in Congress.”

Oh, yea they are so angry they refuse to do anything about it.

“McDonough said the White House is crafting its executive actions carefully to “make sure the steps we have taken are ones we can lock down and not be subjected to undoing through [Congress] or otherwise.”

If these words don’t frighten you then you are either naive or ignorant.

Forget hiding: it’s time to kick ass on the GOPe hacks situated to stop this.

Let’s start with Lyin’ Ryan, the Wisconsin crapweasel who refused to stop the budget bill that funded everything O and the Gimmecrats wanted.

Note “actions” not “orders”. Extra-constitutional but who cares in Washington?

It’s a bluff. Obama will not do shit to damage the democrats in the election.

After the election, the executive actions can be undone by President Trump.

What makes you so sure Obama gives a good [email protected] about the elections – he isn’t running but he does want his “legacy” what ever that means to him.

Don’t underestimate the depth of Obama’s and Valerie Jarrett’s sickness.

Do not comply. And be ready to back it up.

“The comments are a clear sign the president will continue his go-it-alone approach, which has angered Republicans in Congress. ”

Actually, that is the same problem the Democrats have with him.

“The comments are a clear sign the president will continue his go-it-alone approach, which has angered Republicans in Congress.”

Angered Republicans in Congress? Not enough. Not by a long shot.

I’m kind-of expecting a move the day after the 2016 elections where every detainee in Gitmo is flown to Leavenworth without any warning at all, and bulldozers are used to level every single structure in Gitmo that might be used to house them on return.

Audacious action is thanking Iran for releasing our sailors.

It sounds like sociopaths wetting themselves as they anticipate controlling more whining subjects. They fear fighters, though, thus the attempt to intimidate. They do not fear the GOPe eunuchs, however.

With the current Roll-Over Party leadership in Congress Obama can get away with just about anything. They have no leverage and no interest in confronting him. Some members may posture for re-election purposes but it is all political theater.

Obama’s lame duck EOs will focus on embiggening executive branch powers at the expense of congressional powers, rather than on lightning rod issues like gun control. They’ll be wonkish and beyond the ken of LIVs and most of the media. Keep an eye on EOs that broaden the bureaucratic powers of agencies like the EPA and Dept of Education, actions that also serve to appease his radical base of environmentals and would-be social engineers.

We are watching the Obama administration discard the U.S. Constitution which they treat as “a scrap of paper”. A truthful statement from the White House would say, “We plan to operate a presidential dictatorship for the rest of our term and also to try to set policy beyond our term of office in ways difficult to undo. We will rule by decree and with no respect whatever for the outdated concept of separation of powers. Nor will we care one bit whether the American public likes or supports what we are doing. We are lame ducks and can ignore the voters entirely.” Now that would be a truthful statement of their intent.

This Oblamo Admin. Needs to be taken out of office NOW. They are operating like a Dictatorship. Obama has been doing it for several years. This is one big Conspiracy. I don’t know if it is just money or Black mail, using NSA Spying on innocent Politicians.

Okay Legal-types. Can you answer a question about Executive Orders vs. established law:

Does this make sense? I wonder about the new Executive Orders about gun control. If someone is following the duly enacted law, how can a prosecutor arrest and the prosecute someone for doing something that was not actually enacted into law?

You’ve really got this all tangled up.

Let’s start widda basics: an EO (however it is called) is ONLY directed to the members of any POTUS’ OWN branch, and is only binding on THEM.

No POTUS can order any OTHER branch of government to do anything, and no EO is DIRECTLY effective on ANY state authority.

Now, from that sound basis, you can see that a statute cannot be directly attacked by an EO (one being a law, and the other an administrative order only acting on administrative agencies).

In the case of the Obama immigration EOs, they were directives to, in essence, NOT enforce the law, which is KINDA within the purview of the administrative branch to do. They have “prosecutorial discretion” because they just don’t have infinite resources and have to prioritize.

A bit, thanks. However, how can a gun dealer be required to do something via EO?
Not surprised about the tangling, I’m an engineer, not a lawyer. Although I am a law and order type guy.

Well, that’s the question that will be taken up by a court.

When the statute says one thing, and an EO tells (for instance) the ATF to apply another standard, you have a question for the courts to handle. All three branches in a happy lil’ tangle!

AND the Congress can put the ki-bosh on the whole question by clarifying the law.