The Vast Right-Wing Conspiracy is Back!

The Vast Right-Wing Conspiracy is Back!

And this time it’s after Hillary… or something 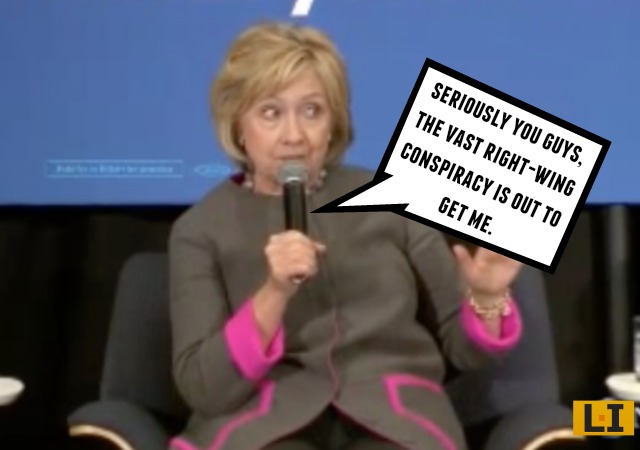 In an exclusive report published by Fox News Tuesday, a letter from the Intelligence Community Inspector General Charles McCullough III, “laid out the findings of a recent comprehensive review by intelligence agencies that identified “several dozen” additional classified emails — including specific intelligence known as “special access programs” (SAP).” Also included in the letter was the claim that among the classified information contained in Clinton’s emails were data of the most secretive nature.

Intelligence Community Inspector General Charles McCullough III was appointed by President Obama and confirmed with laudations from Democrats as the best man for the job. But that’s irrelevant.

Forget addressing the substantive claims of the Fox News report; Hillary’s campaign whipped out an old 90s era retort. Clearly, the Intelligence Community Inspector General was colluding with the vast right-wing conspiracy to undermine her candidacy.

The vast right-wing conspiracy is also to blame for her husband’s various affairs and sex scandals, apparently. Or at least that was Hillary’s story in 1998.

But back to the VRWC’s current manifestation. McClatchy reports:

“I think this was a very coordinated leak,” Brian Fallon said on CNN. “Two months ago there was a…report that directly challenged the finding of this inspector general, and I don’t think he liked that very much. So I think that he put two Republican senators up to sending him a letter so that he would have an excuse to resurface the same allegations he made back in the summer that have been discredited.”

The comments came after Inspector General Charles McCullough III told senators that he believes at least several dozen of emails Clinton sent and received while she was secretary of state contained classified material at the highest levels, according to a letter obtained by McClatchy.

McCullough was nominated by President President Barack Obama in August 2011 to be the first inspector general for the 16 intelligence agencies and the Office of the Director of National Intelligence. He was unanimously confirmed by the Senate Intelligence Committee that October. The full Senate agreed by unanimous consent in November.

“He has long experience conducting investigations both as an inspector general and a FBI agent,” Feinstein said in a floor speech in November 2011. “He is an attorney and is well-familiar with the intelligence community.”

“We’ve heard good things about you and I’m looking forward to supporting you when Chair Feinstein moves ahead with the vote,” Sen. Ron Wyden, D-Oregon said in September 2011.

“You clearly have been able to operate in both the civilian and the military sectors which will, I think, prove to be a very valuable set of experiences, if you’re confirmed,” Sen. Mark Udall, D-Colorado. said in September 2011.

Clinton has been under fire for months for exclusively using personal email routed through a private server while serving as the nation’s top diplomat. The FBI launched an inquiry into the handling of sensitive information after classified information was found in some.

Hillary can blame the VRWC until the cows come home, but that won’t save her campaign this time around

I give her points for originality.

Ok- couldn’t make to 5 w/out laughing.

The identity politics of HRC:

Non-feminized men must be part of the VRWC.

Non-feminists are part of the VRWC.

Everyone who didn’t vote for her in the last election must be part of the VRWC.

And everyone who votes this time around for Sanders is part of the VRWC.

Eventually, perhaps given the time she’ll have to think about it in a federal prison cell, she’ll realize she’s the only member of her VRWC.

I wonder if George Stepalloverous would agree?

I call him Stephococolus since he tends to give me a sore throat because of yelling at him.

This is really so simple.
What are the top 3 words that people associate with Hillary?

Jeeze, no right wing conspiracy was even needed.
She has provided the rope, tied the noose, and put it around her own neck!

but that won’t save her campaign this time around

An extraordinarily feeble effort, even for the perennially unimaginative Hillary. But the fact remains … something is saving her campaign, and has been for some time now. And since that something is certainly not her or her own feeble efforts, then what?

No need to wonder. It’s the media and the DNC that has been trying frantically to prop her up since she started her campaign.

It is truly a mark of how unbelievably bad a candidate she is that even with the DNC and media’s slavish adoration, she’s LOSING to Sanders.

Every ‘debate’ was scheduled for times people would be least likely to watch, and she was asked questions that basically amounted to, ‘We’ve been told that you’re amazing and going to fix everything, is that true??!!’

Even when the media talks about Hillary they absolutely REFUSE to show any actual video clips of her unless unavoidable. They instead pop up a picture of her and say, “and Clinton said XXXX”.

I find it absolutely hilarious that Bernie ‘Socialist’ Sanders is beating her in the polls by a wide margin.

I give it a month and when she has convincingly lost to Sanders in the first few states she’s going to be indicted and hung out to dry.

Debbie does Dallas has been the driving force behind the saving at all cost the campaign of one Hillary Rottecrotch Clintoon.

People in public life (even street criminals) don’t get more disgusting than this filthy #$%&.

Just waiting for the perp walk.

Increasingly I’m hearing predictions that she will one day in the not too distant future be rushed to the hospital and soon drop out for “health reason.”

Inadvertently give you a thumbs down. Sorry.

It’s amazing that the woman is still alive. She has no heart and apparently lost her soul years ago.

Blame the media. Hillary would not use the term Vast Right-Wing Conspiracy had the media reminded her that the first time she used it regarding Lewinsky was a lie.

They still could do it. But they won’t.

“stole furniture” he’s an accused serial rapist and she’s a murderer! Yet the left controlled media continues to keep a protective bubble around both of them.