There is no legitimate basis upon which to treat Bill Clinton better than Bill Cosby. 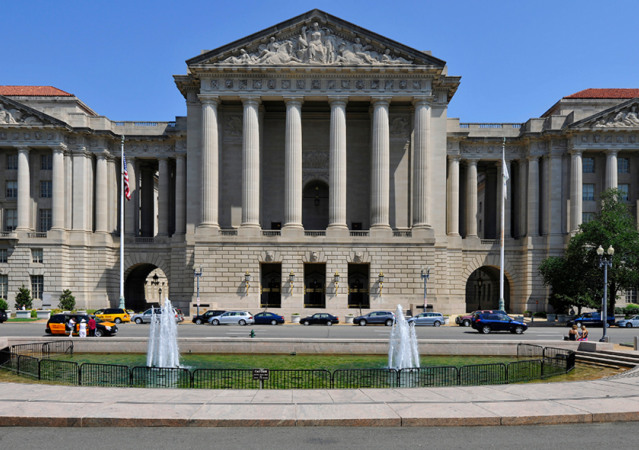 We are in the midst of a campaign to strip Bill Cosby’s name from buildings and other forms of public recognition because of allegations he sexually abused multiple women decades ago.

Cosby has not been convicted of a single one of those charges.

But that has not stopped action against Cosby in the public sphere. For example, Buzzfeed reported in September 2015, Bill Cosby’s Name Removed From Historically Black University In Ohio:

Central State University, a historically black college in Wilberforce, Ohio, announced Friday it is permanently removing Bill Cosby’s name from a building following the multiple allegations of sexual assault made against the comedian.

The building was named after the comedian when his family donated over $2 million to the school.

Spelman College. In July, the historically black women’s collegediscontinued its endowed professorship with Cosby, who donated $20 million in 1988. The school had suspended the program in 2014 before terminating it completely.

CAA. The comedian’s talent agency, which had represented him since 2012, dropped him in late 2014.

NBC. In late 2014, the network halted development on a new Bill Cosby sitcom. A top NBC executive said it was “safe to say” Cosby would not be returning to the network.

Jerry Seinfeld and David Letterman. In July, both of the comediansasked for their endorsements to be removed from a 2014 Cosby biography titled Cosby: His Life and Times.

Brown University. The Ivy League institution rescinded Cosby’s honorary degree in September. “It has become clear,” wrote Brown President Christina Paxson, “by his own admission in legal depositions that became public this summer, that Mr. Cosby has engaged in conduct with women that is contrary to the values of Brown.”

Fordham University. In September, the New York City university’s Board of Trustees unanimously voted to rescind Cosby’s honorary degree. It was the first time Fordham ever revoked the honor.

Tufts University. The Massachusetts school announced in October that it was rescinding Cosby’s honorary doctorate of arts.

Goucher College. Cosby had received an honorary degree in 2001 when he was the school’s commencement speaker. In October, it was rescinded.

Former President Bill Clinton also has been accused of multiple sexual assaults. Many of the details have drifted from memory.

Red Alert Politics prepared A millennial’s guide to Bill Clinton’s 20+ sex scandals. Many of those scandals did not involve claims that would constitute crimes. For example, Clinton used his power to exploit Monica Lewinsky, a relationship that almost universally would be viewed by feminists in 2016 as an abuse of power disparity and tantamount to a crime even if not violative of the criminal code.

But there were other instances where criminal activity was involved, such as the Paula Jones case.

But the most serious accusation was of rape by Juanita Broaddrick. Left-leaning Vox.com did a recent “explainer” on the Broaddrick case and is is sufficiently chilling that David French at National Review wrote, It’s a Bad Day for the Clintons When Vox Fairly Explains the Rape Allegation Against Bill:

I must admit, when I clicked this morning on Vox’s ”explainer” of Juanita Broaddrick’s rape allegation against Bill Clinton, I expected a whitewash. I was wrong. Not only did Dylan Matthews do an excellent job laying out the story, he reminded me of a number of details I’d forgotten.

Her story is infuriating, painting a picture of casual, callous brutality. …

So why is Bill Clinton’s name still on the William Jefferson Clinton Federal Building, which houses the Environmental Protection Agency?

In 2012 Congress passed legislation renaming the building.  The Washington Post noted during the 2013 naming that this was an unusual and prestigious recognition, Bill Clinton is joining an exclusive club:

Now that the Environmental Protection Agency’s headquarters has become the William J. Clinton Building, the nation’s 42nd president will enter an even more rarified club than the one he’s belonged to for more than a decade: he will be one of just under two dozen people who have a federal building in the District of Columbia named after them.

If we are to hold Bill Clinton to the same standard of public recognition as we are holding Bill Cosby, there is no reason why Clinton’s name should continue to adorn a major federal office building. What message does that send to women who work for the federal government, and to the school girls who will pass by the building during tours of D.C.?

More important, this is a year in which we likely will have the first female nominee for President for one of the two major political parties, and in which fair treatment of women is a central campaign issue for everyone.

This should be the year in which Bill Clinton’s name should be removed from the EPA office building.

We have started a Petition asking the White House to remove Clinton’s name. 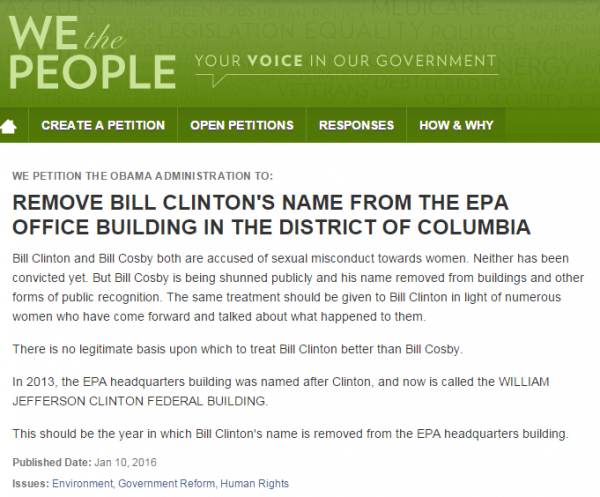 We need 100,000 signatures for the White House to be required to respond. We also will take the Petition to Congress to ask that, if legislation is needed, such legislation be passed. But given President Obama’s willingness on a range of subjects to accomplish goals through executive and agency action, we think Obama can get it done. Yes he can.

I do not agree with either set of public actions.

After the episodes involving Tawana Brawley, the Duke LaCrosse team, and the Mattress Girl, in addition to the now-notorious “hands-up, don’t shoot” perjury, I am done supporting hysterical public attempts to “Do Something” based on rumor.

That said, if we are going to have convictions in the court of public opinion, they should be impartially administered. I would very much enjoy a few pointed questions addressed to the supporters of the actions against Mr. Cosby. All of these actions should be the result of public votes. So: do the people who have taken public action against Mr. Cosby also support a similar action against Bill Clinton?

The funny thing is Letterman retracting his endorsement of Cosby’s book. Any idea how many suits he’s settled himself about sexually harassing his staff? Interns were far safer working for Bill Clinton than for David Letterman. At least Monica welcomed the attention.

I would be in your corner on this, except these accusations are not rumors. Bill Clinton was impeached and disbarred as a result of these women coming forward.

I have anonamed after him in the first place. He’s still alive, and not even 70 years old.

Some characters went into the bit bucket. That should have started:

I have ano[ther question. Why was anything] named after him in the first place?

(I mean even if he had been an ethical person)

Bill Clinton isn’t disgraced yet, so his name was put on that.

Although he should be, and for far more than these sex and even rape related offenses. But who knows much of what he did?

You could start with the genocide in Rwanda, where he not only did nothing, but made sure that no other country did anything to interfere with it, either.

I’m just mentioning here what nobody can seriously dispute.

I could wish we weren’t so blooming eager to name public works after living politicians.

I agree. Dead 5 years or more would be the requirement I’d recommend.

Was naming the building a condition of the “donation”?
Will they be giving the “dirty” money back?

It is not unusual for people donating money to some non=profit to have naming rights, although at least it used to be that something was named after a deceased member of the donor’s family.

What explains the EPA is that politicians have started to have things after themselves even while they are still in office! That used to never happen.

Personally, I would have hyped up the petition with more SJW speak.

The fun part will be picking out the signatories by initials to LI commenters.

I am so proud of Texas! Our prisons are named for politicians.

Maybe the Cosby family should ask for the return of the money they gave those universities?

I think a petition just to remove the EPA headquarters all together might receive more support.

“I must admit, when I clicked this morning on Vox’s ”explainer” of Juanita Broaddrick’s rape allegation against Bill Clinton, I expected a whitewash. I was wrong. Not only did Dylan Matthews do an excellent job laying out the story, he reminded me of a number of details I’d forgotten.”

I take this not to mean that Dylan Matthews is necessarily honest but that he is likely just a Sanders supporter. Honesty for it’s own sake doesn’t apply.