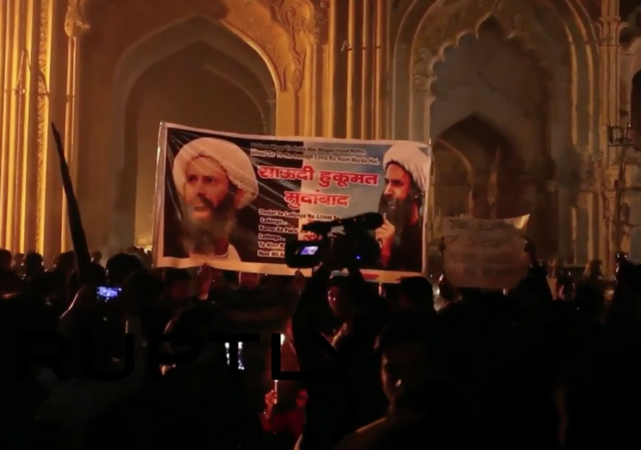 This could get interesting:

Saudi Arabia’s execution of top Shia cleric, Sheikh Nimr al-Nimr, along with forty-six other individuals found guilty of terrorism lead to protests across the region and beyond.

Saudi Foreign Minister Adel al-Jubeir was speaking after demonstrators had stormed the Saudi embassy in Tehran.

Sheikh Nimr al-Nimr and 46 others were executed on Saturday. Saudi Arabia found them guilty of “terrorism”.

Mr Jubeir said that all Iranian diplomats must leave Saudi Arabia within 48 hours.

Protesters stormed the Saudi embassy in Tehran late on Saturday, setting fire to the building before being driven back by police.

Iran is Saudi Arabia’s main regional rival – they back opposing sides in the Syria and Yemen conflicts.

On Saturday, a mob attacked the Saudi embassy in Tehran and a consulate in second city Mashhad amid protests at the execution in Saudi Arabia of Sheikh Nimr al-Nimr.

The 56-year-old, a force behind 2011 anti-government protests in eastern Saudi Arabia, was among 47 convicted men put to death on Saturday in the kingdom.

The others were Shiite activists and Sunnis who the Saudi interior ministry said were involved in Al-Qaeda attacks, with some beheaded and others shot by firing squad.

Jubeir responded on Sunday by saying: “Iran’s history is full of negative interference and hostility in Arab issues, and it is always accompanied by destruction.”

Relations between Sunni-ruled Saudi Arabia and Shiite-ruled Iran have been strained for decades, with Riyadh frequently accusing Tehran of interfering in Arab affairs.

[Featured Image a screen shot from this video]

The conflict between Islamic factions was aggravated with Obama’s premature evacuation of coalition forces from Iraq, compounded by his support for the social justice movement “Arab Spring”, quiet negligence of a domestic civil rights movement in Iran, then cemented with ongoing anti-native policies in Syria, Libya, etc.

It’s a left-wing thing. There can be only one Caliphate.

You summed up the Obama/Clinton middle east fiasco nicely. Where are all the progressives who were so concerned about the mess GWB was making in the middle east? Things are orders of magnitude worse now, but I don’t hear those same voices of protest any more. I wonder why not?

Ah, you’re forgetting that day when Hillary took over the State Department, she and Lord “O” shouted out their joint declaration of their reign: “Smart Power!”

To which, the retort should be: “Really?”

Why did the Saudis execute the Iranian cleric?

Who here feels comforted that Iran will have nukes in a few years?

It is possible that the Saudis will decide that since Iran is going to be allowed nuclear weapons that it is better to go to war with Iran now before they get nukes.

“Why did the Saudis execute the Iranian cleric?”