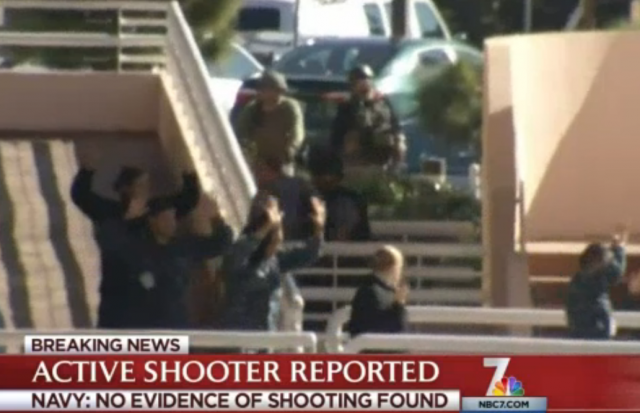 Early in December, the first news I had of the San Bernardino terror attack was Facebook inquiries as to whether I was alright.

Today, Facebook friends were asking me about another attack that seemed to be occurring a mere mile from where I often work.

Fortunately, it was a false alarm:

Reports of an active shooter at Naval Medical Center San Diego (NMCSD) Tuesday morning led to a lengthy lockdown of the military facility, but U.S. Navy officials confirmed no gunman was found and no injuries were reported.

NMCSD was placed on lockdown just after 8 a.m. and people inside were ordered to shelter in place after an unidentifed Department of Defense employee reported hearing three shots fired in the basement of Building 26, which houses a gym and barracks, according to the Navy.

Nearby schools were shut down and patients who needed care were directed to other facilities. Because the memories of San Bernadino still fresh, the security response was intense, swift and professional.

“This is exactly what we want and we train for this,” Zimmerman said. “When that call came in that there was an active shooter on the base, no one hesitated (to respond.)”

…Beth Elder, a medical-sale representative who visits the hospital several times a week, was among the thousands of people stranded outside while the incident unfolded.

“It’s scary,” Elder said. “I help people – that’s what I do. To have this kind of danger in your own back yard… It’s a different world.”

Elder is correct: We have entered a new era in terrorism. For example, active shooter emergency response tactics now include fighting if there is an opportunity to do so.

During local talk show discussions today, many San Diegans responded they would welcome a chance to fight. Enhanced preparation is a sound idea for American cities and military centers, given the fact that an ISIS leader has called on Muslim couples to emulate the terror attacks perpetrated by Syed Rizwan Farook and Tashfeen Malik.

In the new volume of its English-language magazine, Dabiq, released on Wednesday, ISIS encourages married Muslim couples in the West to follow in the footsteps of the Muslim married couple who carried out the San Bernardino, California shooting attack in December.

…The organization praised the sacrifice of the San Bernardino couple, who “left behind not only their comfortable lifestyle, but also their baby daughter, knowing that they would never see her again.”

In order to convince more married Muslim couples to “march out together to fight the crusaders in defense of the Khilafah” even at the cost of leaving their children behind, the magazine authors quote a verse from the Koran, in which Allah promises to care for those left behind by the believers.

Speaking of care for those left behind, the families of of two of the victims are now suing the county. One of those victims was Sierra Clayborn:

The family of a Moreno Valley woman killed in the Dec. 2 terror attack at the Inland Regional Center in San Bernardino has filed three claims with the county seeking damages totaling more than $200 million.

The claims were filed late Thursday afternoon by Los Angeles-based attorney Theida Salazar on behalf of Gregory, Tamisha and Kimberly Clayborn, relatives of Sierra Clayborn, an environmental health specialist for the county who was one of 14 people killed in the mass shooting, which the FBI called the deadliest terrorist strike on U.S. soil since the 9/11 attacks.

Each claimant seeks $68 million in damages, a total of $204 million, and allege wrongful death, negligence, and that the county fostered a hostile work environment and failed to take corrective measures to prevent loss of life.

Meanwhile, California legislators are seeking to control the flow of legally purchased weapons by citizens instead of immigration of potential terrorists, and one of our Democratic party’s major candidates is angrier at Republicans than ISIS.

It is a good thing that Americans still have fight left in them.

We all saw that one clown arrested yesterday for plotting to attack a Masonic lodge.

Based on what he was told, he probably thought that would be a turkey shoot. In reality if you were to check every one of those guys wearing cowboy boots with their suits, you’re probably going to find a pistol (and it will probably be a 9MM .45 or at least a .40).

Fight, of course, in the American spirit. It’s better for a life to be prematurely aborted while standing than cowering or helpless.

The fighting started with the 4th airplane on 9/11. Once you know they intend to kill you, you can have clarity of purpose.

I remember the first carjacking stories, especially because a young mother that worked at my location was murdered. Nowadays, people know what to expect, and sometimes they react.

We can fight, and we can win.

Was it not a Mexican chap, name of Emiliano Zapata, who said:

“It is better to die on your feet than live on your knees.”

We’re closing down entire swathes of major cities based on hysterical people imagining non-exsistant gunshots, what’s up with that anyway?

“This is exactly what we want and we train for this,” Zimmerman said. “When that call came in that there was an active shooter on the base, no one hesitated (to respond.)”

Way to pat yourself on the back for responding in a timely fashion to a false alarm. Everyone in CA is high on rhetoric 24/7.

“Run, hide or fight.” Fight? With what? Staplers and hole punches? This was another gun free zone. Sorry, but this is a nonsense post. Even soldiers aren’t allowed to carry weapons on base.

This was a complete overreaction by SDPD (and the media, both TV and radio) over sounds from a construction site. And the unhinged, affirmative action Police Chief Shelley Zimmerman couldn’t blither on enough about the great job of the SDPD, when all they did was look like Keystone cops.