Comparing and contrasting his legal experiences with Hillary Clinton’s! 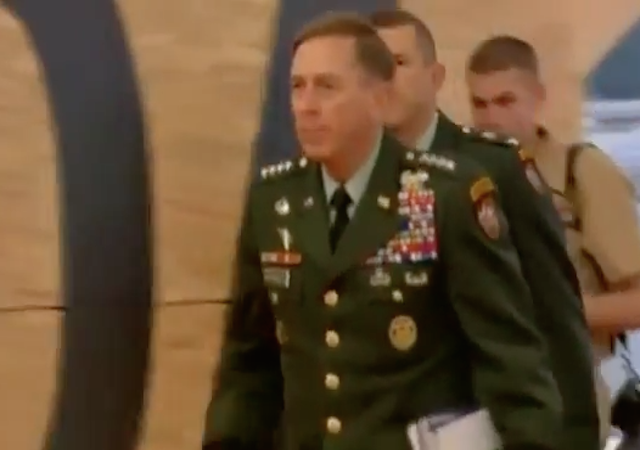 Retired four-star general and former head of the CIA, David Petraeus, may be demoted for his 2012 scandal involving classified material.

The Pentagon is re-examining whether retired Army Gen. David Petraeus should be retroactively demoted for giving his biographer unauthorized access to classified information, defense officials say.

While the Army officially determined last year that Petraeus should retain the status — and pension — of a retired four-star officer, that decision is now under review by Defense Secretary Ash Carter’s office, officials said.

This is a troubling development, given that Hillary Clinton is asking to be promoted to Commander-in-Chief despite her allegedly knowledgeable mishandling of classified electronic communications.

But is it really fair to compare the two?

As a refresher, Petraeus was having an affair with his biographer, Paula Broadwell. The general came under investigation when FBI agents were digging into cyber-harassment of another party by Broadwell.

…• Nov. 9, 2012: Petraeus resigns from the CIA after President Obama is told the day before about the affair and the FBI investigation. Petraeus signs a form saying he has no classified material.

• April 2013: FBI seizes eight binders of classified material in a search of Petraeus’ Arlington, Va., home, where he had kept them in the unlocked drawer of a desk.

• March 3, 2015: Petraeus reaches a deal with federal prosecutors to plead guilty to a misdemeanor charge for mishandling classified materials….

What were the charges that he ultimately plead guilty to? One count of violating Title 18, United States Code, Section 1924…basically “unlawfully and knowingly” moving classified materials the clear intention to keep those documents … at “unauthorized locations.”

It appears that he took classified material to share with his biographer and mistress, possibly thinking that it would help his post-military plans that may have included a presidential run. I am no legal expert, but Hillary instructing a State Department employee to remove classification markings before faxing a document since a secure fax device could not be located sounds at least as bad…if not worse.

There was no rating of the level of classification that Petraeus shared with Broadwell, so it is not evident if he share any material from the most highly classified Special Access Programs (like several dozens Clinton stashed on her bathroom server).

However, the magnitude of Clinton’s activities and the security risks both seem significantly greater. And questions remain what she did with the information after mishandling it. Given that the FBI is now considering an investigation of “pay to play” allegations between the Clinton Foundation and the State Department, we may eventually have those answers.

Petraeus was fined $100,000 and is still serving his 2-years probation as part of the deal he made to avoid jail. Why is a demotion being proposed now, which will cost him $50,000 each year from his pension and tarnish is legacy a bit more?

Is it to send a message to Petraeus to stay silent about what he may know about Benghazi? Is it a shot across the bow to Hillary Clinton, and an indication that an indictment is in the offing?

Fox News Channel contributor John Bolton thinks the later is a distinct possibility…especially because it “has to come from the White House” and it is not a course that the Pentagon would likely pursue.

So, no, it is not fair to compare Petraeus and Clinton..yet. But perhaps Clinton will be experiencing some of the justice that has been dished out so generously to the general soon!

There are enlisted ranks in prison for this kind of stuff, so I don’t feel too badly about Petraeus (who I admire in a lot of ways) losing a star and some $$$.

If this does not get prosecuted, we have no working criminal laws above a certain political level. We have titles of nobility, and that can’t be tolerated.

Rags, we don’t often agree on things, but on this point you’ve hit it out of the park. If Clinton is not indicted and convicted and sent away for the rest of her unnatural life, then the rule of law in this country is no longer operable.

If Petraeus is demoted after-the-fact, can Hillary’s titles as Mad’am Secretary and Senator also be removed? Can she just go back to being the First “Lady” of the Presidential Sex Predator?

Not exactly taken away, but Congress can still impeach her and prevent her from holding office again. Impeachment not only serves the purpose of removing an official from office, but it also serves the purpose of preventing an official from returning to an office of trust. Former officials can be impeached to serve the second purpose. This is especially appropriate in Hillary’s case, in which her mal- and misfeasance in office was discovered after vacating the position. She shouldn’t get a political pass (and she still should be on the hook for criminal acts) just because she wasn’t caught while on the job.

But Rags it has been prosecuted he made a plea deal and is serving the sentence. If the Army wanted to have more of a say then they should have Court Martialed him instead of letting the civilian courts take care of it. The issue of his rank has already been determined. This is to much like double jeopardy for me. This is no different than going back and saying that oh 20 years wasn’t enough of a sentence so we are increasing it to 30. He has paid his fine and is doing his probation that should be the end of it.

They are only doing this to keep his mouth shut. Both parties know he could have been much more seriously punished under the UCMJ but to keep him quiet they will continue holding this over his head. . . Everything is monitored.

Frankly I think that if they do demote him he would be able to get it reversed, especially since the decision has already been made once and the Army chose to let the civilian courts handle it.

A word to the FBI and waiting Americans…

There is no classification of data/material/intelligence that is higher than Top Secret. After that simply comes special accesses depending on the type or source etc. of the data. There is SCI and TK, and SAP, and others. Access to SCI information, for example, requires a “Need to Know”. If the individual needs access to this information, it is granted. However only if one needs to know that particular bit of SCI information, certainly not all SCI information. It is the same with all else. This level of information is kept in secure facilities, really secure facilities where everything is compartmentalized. Someone of the level of DCI has access to everything but not necessarily all the details. A regular low-level employee only has the exact access they need to look at the data they need to look at just at that particular time or instance.
In a place, for example, like the NSA, the cooks and servers and janitors have TS clearance because they need to be in the facility but nothing beyond that because they don’t need to know.
This whole “classified data on Hillary’s server” thing should qualify her for 20+ years in a federal prison. As I’ve said before, if were me and I did what she did at the exact same time that she did it, I’d be starting the 3rd year of my 20 year sentence by now.

Yea, most people also don’t know that Top Secret Clearance are really kind of a dime a dozen. Anyone in a “command” position has to have a TS clearance or they can’t receive orders. Which means pretty much anybody above the level of E-5 (Sargent in the Army) has a TS clearance. In some cases even lower ranks need one depending on job and specialty. So Top Secret isn’t really that secret.

The hell its not.

$500 fine, one year in jail, suspended in lieu of unsupervised probation.

Unfair comparison. St. Hillary the Clinton is political royalty (just ske her) while GEN Petreaus is a simple soldier (albeit with more education, PhD in International Affairs and 4 stars).

Waterboarding is too good for her.

Feh. Bill Clinton had the highest clearance. And, so, too, does Obama.

Going after Petraeus was easy once the girl friend gave proof to their under the desk antics. Bill Clinton had way more experience tapping into girl friends. And, nobody expects generals or politicians to be saints.

The media? They actually ran with a story of a general who had sex outside of marriage. You know, most Americans did not become irate. Nor does there seem to be any anger out there towards Bill Clinton.

If Petraeus didn’t know fooling around with that party girl under the desk came back to bite him in his arse more than once.

At least his name gets spelled correctly.

The general treated unfairly was Douglas MacArthur. But Truman considered him a viable candidate to run against him in 1948. Just to show you how stupid the GOP was way back then. And, still is. They’re not called the “stupid party” for nothing.

Hillary should be in orange and making little rocks from big ones.

The real crime is how Obama has emasculated the military, re-socialized them and drummed out so many flag officers.

He should claim the ‘Hillary Clinton defense,’ whatever it is. It seems to be a pass to any criminal behavior.

If the Clinton is not indicted, and James Comey doesn’t resign in protest, he will have become Lois Lerner — in drag.

Except Louis Learner was a willing participant.

Someone remind me what “sheep dip” was hitting the fan in the White House at the same time that Patreus got hit. As I recall there was some serious speculation that he refused to go along with something that Jarrett wanted and within hours he owned up to the mistress and resigned….

He knows far too much about what was really going on in Libya.

This is a “keep your mouth shut” kind of deal.

I read that Petraeus
1) shared his personal journal (which was classified and contained classified info)
2) shared it with one person, said person had security clearance (don’t know the level)

Is that correct? If so, the comparison with Hillary becomes even more of a mismatch.

This threat is some three years after the fact and happens to coincide with the release of the movie 13 hours. Patreaus would know if a stand down order was in fact issued and this is a way of ensuing his continued silence.

He should suck it up and talk even if it cost him a star. That would redeem him for many

The trial should already be over and hitlery should be deep into serving her life prison sentence with no hope for parole.
However, I really thought with Fast and Furious we’d see, at the least, some firings, suspensions and maybe a trial or two.
But the whole thing just faded away as the admin stonewalled releasing documents and invoked sham executive privilege, and we have two dead ATF people (Jaime Zapata was murdered in Mexico with an F&F gunm most already know Brian Terry), who knows how many murdered Mexican’s and others with the guns this admin sent out to push gun control (river of steel was the gun control mantra).
The ATF if you do a little search is one of the most corrupt agencies we have. Do a search for ATF “glory hole” incident. Lots of dirt that gets swept under the rug.
EPA ruined two rivers out west and no one was punished as far as I know. Finally the Flint EPA chief resigned, but that seems to an anomaly for this criminal enterprise.
Expect the worst is now my motto.