Radical Islamists Have Been Crossing U.S.-Mexico Border for Over Decade

Radical Islamists Have Been Crossing U.S.-Mexico Border for Over Decade

And the government has known about it. 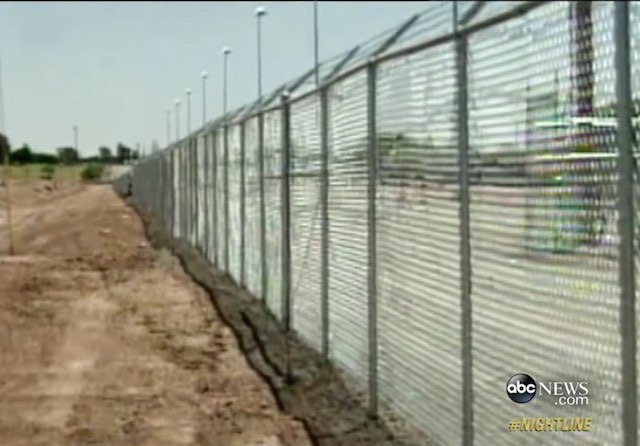 Newly released documents from the State Department indicate the U.S. government has known Islamic extremists have been entering the country via Mexico for over ten years.

A cable obtained by Judicial Watch under the Freedom of Information Act shows the U.S. was aware of “smuggling networks” that specialize in the trafficking of suspected Islamic extremists across the U.S.-Mexico border. The 2004 cable was sent to the State Department by the American Consulate in Juarez, Mexico.

Perhaps most alarming was the mention of a top Al Qaeda operative by the name of Adnan el Shukrijumah. The 2004 cable indicates the U.S. had human intelligence leading to his “exact whereabouts.” It was not until December of 2014 – ten years later – that Shukrijumah would be captured (or in this case, killed in Pakistan).

Shukrijumah was described by FBI as “a grave danger to the security of the United States” and had ties to 9/11 mastermind Khalid Sheik Mohammed as well as to the 1993 World Trade Center bombing. Among other acts domestic and abroad, he helped plot the 2009 foiled bombing of Oprah Winfrey’s Chicago studios and the Sears Tower. 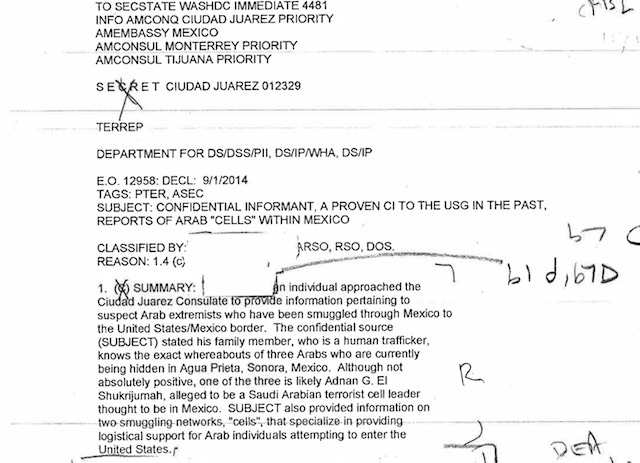 Perhaps even worse, Shukrijumah had been crossing the U.S.-Mexico border by way of his own aircraft. A report from Judicial Watch contained the following:

“Despite being one of the FBI’s most wanted terrorists, Shukrijumah for years managed to slip in and out of the U.S. through the southern border to meet fellow militant Islamists—including Karakrah and Huerta—in the El Paso region, Judicial Watch’s law enforcement sources confirm. In fact, in March [2014] the most wanted terrorist piloted a private aircraft from Mexico into the airfield at Cielo Dorado in Anthony New Mexico, according to high-level government sources.”

Shukrijumah was also part of a sophisticated narco-terror ring with connections throughout the United States. The ring handled the logistics transporting Islamist operatives throughout the country and smuggled weapons and drugs for a cartel in Juarez, Mexico.

Why Shukrijumah wasn’t captured in 2004 is something that remains to be answered. Even though the entire file released by the State Department was declassified in September of 2014, large paragraphs have been removed throughout.

Obama administration officials including FBI Director James Comey have repeatedly denied that Islamists are operating in Mexican towns or that they are crossing the U.S. southern border. In April Comey described the claims as “nonsense.”

They’ve ALSO been crossing our northern border with Canada, coming ashore on both coasts, and flying in on commercial airliners. I’d speculate that they come in on private planes, as well.

With Obama’s recent executive order regarding gun control the Islamic extremists must be licensed to deal in guns just like Chicago’s gang members.

This just reinforces Cruz’s point regarding Rubio in the debate last night, that the danger of radical Islamists coming across our borders didn’t just magically happen 24 months ago. His Gang of 8 bill is too massive a FAIL to run away from…..or to cover up with lies and smoothly delivered talking points.

What Rubio did in DC with Schumer and the Gang of 8, and the lies he and his PAC are spewing about Cruz now, is disgusting. And this is evidence that Rubio’s policies – which are identical to Kasich’s, Christie’s, and Jeb!(tm)’s – are toxic and a disaster for our national security.

Maybe we should contract with the Iranian Navy. They seem to take their borders seriously.

I’ve never been able to put this video out of my mind. A Kuwaiti professor bragging in 2009 about how a single jihadi carrying 4 pounds of anthrax over the Mexican border could kill 330,000 people.

I also thought that after the Iranians discovered the Stuxnet virus they would retaliate with a cyber attack against our power grid or banking system.

I hope I am wrong but it seems like it is only a matter of time.

Europe is a little late, but they are discovering the magic of fences to control long stretches of land borders. Some even build walls, but that is only for highly advanced civilizations.

This is what happens when idiots vote for morons to run the country.

There’s a knowledgeable guy who writes on this topic over at PJM. Give it a glance if interested.
https://pjmedia.com/columnist/todd-bensman

Thank you! I love PJ Media, but am not yet familiar with Bensman.

Well, wish I could say it’s nice to have this be official but no, it’s not. 10 years, a little over actually, that this has been going on and they’ve done nothing more than token efforts at securing that border. Yet another betrayal that we are rightfully angry at DC over!

I actually passed them on the freeway.

There are folks in the civilian world who have known about this for years; it’s good to see it finally being reported to a wider audience. It would be even nicer to see our government actually do something about it!

On a similar note, there are persistent rumors that many of these “undocumented visitors” are bringing weapons with them, weapons that are impossible to legally obtain in this country … although they are available to anyone willing to ignore our firearms laws. [That’s the definition of criminals and terrorists, after all.]