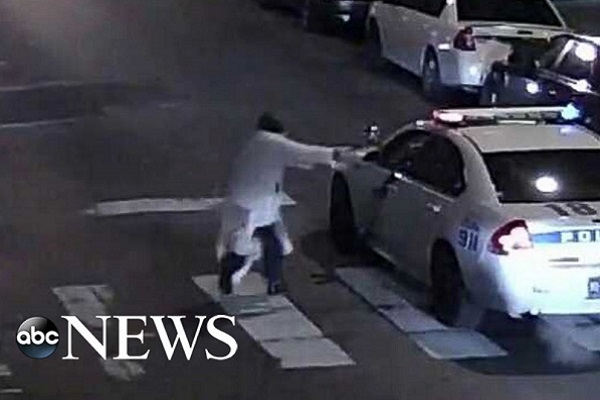 A 30-year-old man accused of firing at least 11 times at a Philadelphia police officer had pledged allegiance to ISIS, police said today.

The gunman, now in custody, “confessed to committing this cowardly act in the name of Islam,” Philadelphia Police Commissioner Richard Ross said during a news conference. “According to him, he believed that the police defend laws that are contrary to the teachings of the Quran.”

Philadelphia Police Captain James Clark said the suspect, who’s name was not released at the news conference, “stated that he pledges his allegiance to Islamic State, he follows Allah and that is the reason he was called upon to do this.”

While the police commissioner clearly understands what happened and why, the newly-inaugurated mayor of Philadelphia (who reestablished Philadelphia as a “sanctuary city” on his first day in office) trots out the now-familiar refrain.

This was the first police-involved shooting for the administration of Philadelphia Mayor Jim Kenney, who was inaugurated four days ago.

Kenney said today of the shooting, “It’s terrible and it does not represent the religion [Islam] in any way shape or form or any of its teachings.”

“This is a criminal with a stolen gun who tried to kill one of our officers,” Kenney said. “Has nothing to do with being a Muslim or following the Islamic faith.”

The terrorist clearly states that he is acting in the name of Allah, shooting police who defend and protect American instead of Sharia law, and declaring his support for ISIS, yet this mayor claims he knows better than the terrorist what his motives are and what Islam means to him.  It’s mind-boggling.

I just finished reading Kemberlee’s excellent article on Charlie Hebdo: One Year Later for the second time, and as I was reading the Philadelphia mayor’s response to this attack, I just shook my head.

As these attacks have spread around the world and become more frequent in our own country, I no longer understand this compulsion to ignore the glaringly obvious in these Islamic terrorist incidents.  What began, I think, as political correctness has become an empty mantra muttered frantically by those in power who either know better or . . . who don’t know better.  It’s hard to decide which is worse.

“This is a criminal with a stolen gun who tried to kill one of our officers,” Kenney said. “Has nothing to do with being a Muslim or following the Islamic faith.”

Well, Rags, you’ve been on pretty much the same page: “I’ve been to Mardi Gras in New Orleans, and it ain’t no good place for a female, either [so why make a fuss over a mass assault by Muslims?].” “My Muslim friend says that 99.5% of Muslims hate the radicals!” “It’s your religious bigotry that makes you critical of Islam and wary of Muslims!” “Don’t you believe in religious freedom?” etc. etc. You’ve practically been an apologist for Islam.

Did you realize that the daily attacks on infidels really do have something to do with “the Islamic faith,” and not just some perversion of a Great Religion by a Tiny Minority of Extremists?

Did you perhaps look into what orthodox Islam teaches; what its “prophet” exemplifies; how Islam has treated everything not-Islam since its founding; what ex-Muslims say about the hatred it cultivates; what the mass influx of average Muslims has done to European cities over the past couple of decades; etc.?

Except you are “quoting” what I DID NOT SAY.

So PHUC you, liar.

i don not think Rag’s post means what you think it means.

“You’ve practically been an apologist for Islam.”

I had no idea.

Newly inaugurated Mayor Kenney is a flaming fool and a tool.

Watch the video. The mayor is a tool. The brand-new police chief is impressive: answers questions directly; avoids answering those he decides are beyond him, and explains why; takes no prisoners in assessing the true nature of this attempted murder.

Is it ok to notice that the police commissioner, who is making sense, is black?

When a mayor, governor, president, etc., is faced with a problem for which he or she has no answer (terrorism), redefine the problem and offer ‘answers’ to your strawman. Better yet, redefine the problem in terms that support some aspect of your ideology and agenda. No crisis ought go to waste. Ergo, a terrorist act becomes Evidence Of The Dire Need For Gun Control. (See: Sandy Hook, Fort Hood, San Bernadino, etc., etc.).

99.999 percent of terrorists are Muslims. Yet Islam has nothing to do with terrorism?

Beheading Truth in the name of Islam: “This is a criminal with a stolen gun who tried to kill one of our officers,” Kenney said. “Has nothing to do with being a Muslim or following the Islamic faith.”

“According to him, he believed that the police defend laws that are contrary to the teachings of the Quran.”

Then why is he even here? He should pack up, and move his sorry ass to that sharia utopia called Islamic State, and leave us alone.

And take all his sorry ass islamist brothers & sisters with him.

As a good Muslim, he is supposed to spread Islam to the rest of the world so that the whole world is Muslim. He just got ahead of himself by upholding Sharia law too soon. Under Sharia law, this shooting of the cop wouldn’t make the news other than a teachable moment to any infadel. He just shot too soon although his intentions were good.

Would this not be RoadPlace Violence ? Has O commented

See, if only there were better background checks this terrorist wouldn’t have been able to get a hold of that gun!!!!!!!

Except for the inconvenient fact that it’s already been traced… as stolen from the Philly PD three years ago.

“As these attacks have spread around the world and become more frequent in our own country, I no longer understand this compulsion to ignore the glaringly obvious in these Islamic terrorist incidents.”

It’s not that Progressives don’t know the cause of these attacks, it’s that they can’t admit it. Same goes for almost every mass shooting in this country. To admit that terror is the nearly exclusive purview of Islamic fundamentalists and that almost all mass shootings are committed by the mentally ill would put the focus on the real problems, and take the focus away from where they want it – on guns.