Obama’s Town Hall on Guns Just More of the Same

Obama’s Town Hall on Guns Just More of the Same 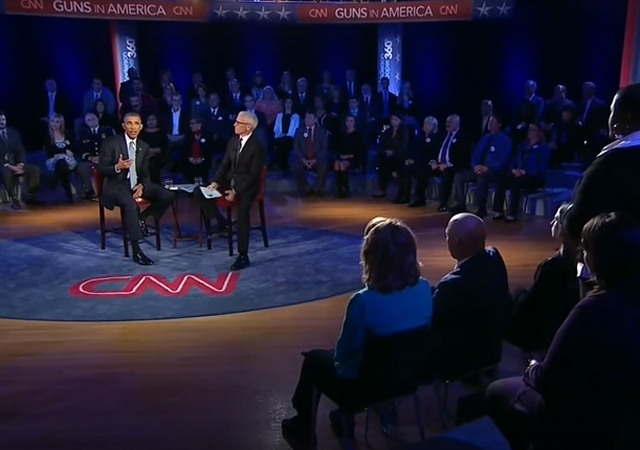 Obama’s “Guns in America” town hall event on CNN last night was a quiet event with plenty of respectful questions from the invitation only audience but failed to present any new ideas for dealing with gun violence short of making it harder for people to buy guns.

Within the first 15 minutes, Obama complained that every time he tries to do something on guns, his message is distorted by his critics.

Obama Slams Charge That He’s Taking Away Guns as ‘Conspiracy’

The president quickly emphasized that he has “respect” for people who want a gun for hunting and sportsmanship, but it “makes sense to keep guns out of hands of people who would do others harm.”

Obama and moderator Anderson Cooper pointed out that the National Rifle Association was invited to participate in the forum, but declined to attend. Still, the president said he was “happy” to meet with the NRA to discuss his proposals.

“But the conversation has to be based on facts and truth and what we’re actually proposing, not some imaginary fiction in which Obama’s trying to take away your guns,” Obama stressed.

President Obama is in no position to make this complaint.

Aside from the lies Obama has told the American people (think “if you like your healthcare plan…”) he has repeatedly cited the Australian model for gun control as reasonable, a plan which was enforced through outright gun confiscation.

Furthermore, left wing news outlets like the New York Times and the New Republic which have functioned as an arm of the Obama campaign for the last seven years have openly called for the outright banning of guns in recent months.

Nevertheless, Obama portrayed himself as a reasonable man who just wants to make small changes.

“If we are able to set up a strong background check system, and my proposal by the way includes having the FBI hire a couple hundred more people to help process background checks because their big numbers you’re talking about 20 million checks that are getting done every year. Hiring 200 more ATF agents to be able to go after unscrupulous gun dealers. Then that will apply across the country and so, you know, some states may have laws that allow for conceal and carry. Some states may not. There’s still going to be differences, but what will at least be consistent across the country is that it’s a little bit harder to get a gun.

Here’s the video of that exchange:

During the course of the event, Obama also managed to blame both the NRA and Republicans in congress for standing in the way of the changes he has tried to make.

Of course, no Obama event on guns would be complete without at least one total fabrication:

Obama just said there are neighborhoods in America where it is easier to buy a gun than a book. That is a preposterous lie.

“Guns are cheaper and easier than to get a book.” That is pure and total HORSE SHIT. #GunsInAmerica — sjsturkie (@sjsturkie) January 8, 2016

Guns are cheaper & more available than books?Takes a dedicated level of stupid to believe the BS that comes out of his mouth #GunsInAmerica

Don’t tell us you “respect” the right to bear arms when you outright lie to push further restrictions. #GunsInAmerica — Dana Loesch (@DLoesch) January 8, 2016

Furthermore, making the price of gun acquisition and ownership more expensive eventually bringing in class conflict and envy…..”only the rich can own guns”. This did happen in England as part of ongoing “logic” to control gun ownership…. Also, we have seen the same tactic to infringe on voting rights with pole taxes and the classic dem demand of motor-voter laws. Fine… In states demanding permits to own guns…strip out the law or gave same motor-bother laws apply to permits.

“Poll” taxes (just for the record).

Got that one right… auto-correct, iPad with itty-bitty letters at zero-dark-thirty hours trying to make a point too early in the day.

The individuals he’s referring to don’t want to read a book. I pay an average of $10.00 for a book. You can’t buy a toy gun for that price.

What would happen if everyone just ignored the whole dishonest farce?

Rather than ignore, I would love to see an hour-long parody of this event mocking Obama, Cooper, & CNN.

I’d like to see CNN served by the IRS for providing a free info-mercial to the Dem Party.

“Guns are cheaper and easier than to get a book.”

That remark depends entirely on the type of gun and the book, doesn’t it? You can’t LEGALLY buy any kind of functional gun for the price of a library book (free). My kid paid $400 for a college textbook (!!!) last semester. Obama did not explain his price point.

It is credible that, in Chicago, with its strict gun laws, and for the kind of person that is unfamiliar with the local public libraries, a gun that has been used in a crime can be had for free.

The point here is that law-abiding citizens can’t buy a gun as easily as they can check out a book.

His point is that criminals pay less, and the way to keep guns out of the hands of criminals is to reduce the supply of legal weapons. This makes as much sense as the joke about the drunk who was hunting for his keys under a street light, even though he knew he had dropped them elsewhere, “because the light is better, here.”

The better point, of course, made by a black spokesperson for the NRA in a spot last night, was that enforcement of our existing gun laws, which make it illegal for felons to carry any kind of gun, would be effective, and isn’t being done.

I had let my NRA membership lapse; I re-upped last night. For anyone who wishes to show support for 2A and one of the oldest US civil rights orgs, check out nrahq.org.

Despite relentless Dem demonization, I was intrigued to learn that the NRA is considered relatively squishy. If you want to support more aggressive gun rights supporters, check this blog post for a couple of ideas.
http://esr.ibiblio.org/?p=6965

The NRA web site is: https://home.nra.org/

Obama thinks one thing about guns and gun owners. They are bad. He does not think a women should have a gun to protect her self or her family.

All he wants is to make it harder for you and me to buy a gun.

Did we hear once about a bad guy going to jail for a gun related crime? Nope! How about Project Exile across the country?

His end goal in a full out gun ban!
It won’t happen in his last year but that is where this is going. He said this is just a start? It will take time for our gun safety to take effect. What is next Mr. Obama?

Obama, like all statists with fascist cores, believes that if he can turn everyone into sheep wolves will cease to exist. Wolves are in full support.

It’s a little more dark than that. Collectivists intend to organize and monopolize the wolves. Crime never goes away, it just becomes an activity of the State.

Why did anyone who wasn’t a total obama supporter even show up? Why validate the idea that their opinion mattered to that man? He lies all the time. The fact that he said he isn’t going to take the guns away had more to do with the fact that he can’t. As soon as he can find a way, he will.

Obama just said there are neighborhoods in America where it is easier to buy Barack Obama: Hope and Change than a book

NRA: ‘We Were Offered One Pre-Screened Question’ at CNN’s Town Hall on Guns

“Did we participate in CNN’s event tonight? No, we didn’t,” Cox told Megyn Kelly. “We were offered one pre-screened question. Megyn, I know that you don’t send your questions over to the White House, so I’d rather have a conversation with you that’s intellectually honest than sit through a lecture and get one opportunity to ask a pre-screened question.”

“Does it make sense to meet with him (Obama)?” Kelly asked Cox.

“And talk about what, Megyn?” he responded. “This president can talk about background checks all day long, but that’s nothing more than a distraction away from the fact that he can’t keep us safe, and he supported every gun control proposal that’s ever been made. He doesn’t support the individual right to own a firearm — that’s been the position of his Supreme Court nominees, that’s been the position of his administration — so what are we going to talk about, basketball?

“I’m not really interested in talking to the president who doesn’t have a basic level of respect or understanding of the Second Amendment and law-abiding gun owners in this country.”

“This president, in his 8th year, has decided he wants to talk about doing something about prosecutions in this country. He has overseen a 40 percent decrease — a 40 percent decrease — in the prosecution of criminal misuse of firearms. At the same time, as if that’s not bad enough, he’s going back and releasing armed criminals who have been successfully prosecuted and sent to jail,” Cox said.

“[H]e’s no longer credible to speak to the issues of law-abiding gun owners.”

In neighborhoods like Baltimore, Chicago, St Louis, Anacostia and Compton I would bet that guns are more readily available than books.

Or certain places in Washington D.C.

obama lied. Nothing unusual about that. While I’ve only seen YouTube vids of the disinfomercial, his response to the woman who was raped and now carries a gun falls in line with his Illinois senate vote on self protection – he doesn’t think we should be allowed to protect ourselves.

From Politifact
Hale DeMar, a 52-year-old Wilmette resident, was arrested and charged with misdemeanor violations for shooting, in the shoulder and leg, a burglar who broke into his home not once, but twice. Cook County prosecutors dropped all charges against DeMar.
In March 2004, the Illinois Senate passed Senate Bill 2165, a law introduced in response to DeMar’s case, with provisions designed to assert a right of citizens to protect themselves against home invasions, such that self-defense requirements would be viewed to take precedence over local ordinances against handgun possession. The measure passed the Illinois Senate by a vote of 38-20. Barack Obama was one of the 20 state senators voting against the measure.

Correct. He does not think guns are important to have for self defense. From the first excerpted block of text above:

“The president quickly emphasized that he has “respect” for people who want a gun for hunting and sportsmanship, but it “makes sense to keep guns out of hands of people who would do others harm.”

It’s great to see the Ill legislature eventually accumulate enough votes to overcome Dem opposition. If only we could do that on the federal level …. (I’m looking at you two, Ryan and McConnell)