Signs of desperation are beginning to show. 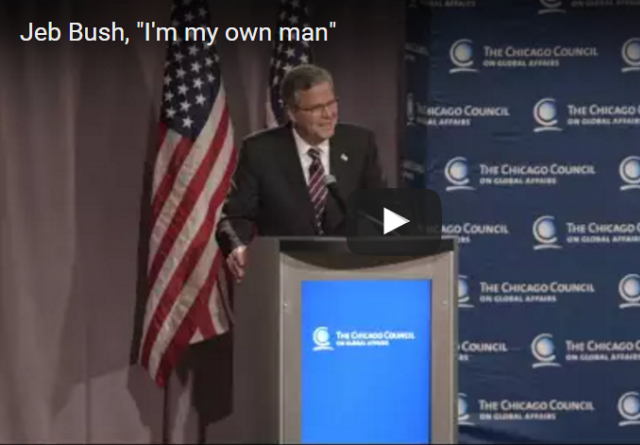 From the beginning of his campaign, Jeb Bush has tried to portray himself as his own man who can run on his own merits.

His campaign logo of Jeb! even lacks the Bush name.

Yet as time grows short and the polls fail to rise, he is increasingly turning to members of his family for support and using the last name which comes with it.

Once the golden hope of the 2016 Republican ticket for the White House but now the butt of frontrunner Donald Trump’s mockery, Jeb Bush has called on his mother to help him win.

The 90-year-old former first lady, whose husband and eldest son have already served as US president, famously advised her second son Jeb against running for the White House.

But it seems she has changed her mind.

“Jeb has been a very good father, a wonderful son, a hard worker — his heart is big,” she says, elegantly coiffed and turned out in blouse and pearls for the 34-second video released by his campaign on Friday.

Professor Jacobson noticed another well known Bush who has been drafted by the Jeb! campaign:

Nothing says "I'm my own man" like @JebBush running campaign contest for baseball signed by his brother pic.twitter.com/WOJHqn5mKV

If Jeb was going to use this strategy, he probably should have done so early on.

At this point, it just looks desperate.

That is not a tan.

Until today I couldn’t make up my mind. But now Jeb’s mommy says he’d be a great president. That’s good enough for me then.

Good call, I guess the feuding over Ted and Trump can subside.

No more Bushes – read my lips. We’ve tried that a couple of times. They can’t be trusted.