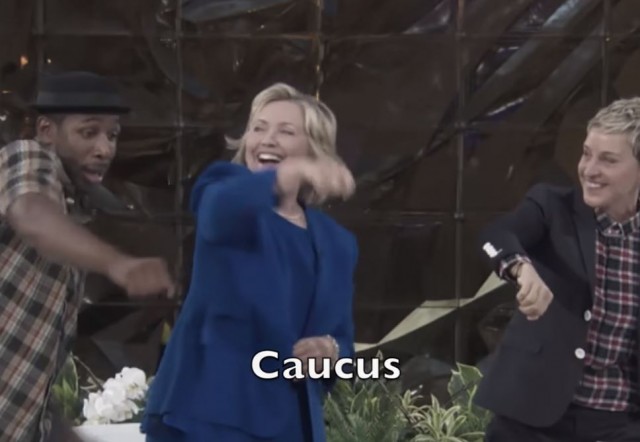 This is one of the more unusual campaign closing statements.

Mike Huckabee in the past has had the pulse of Iowa. But he’s been relegated to the undercard debates recently.

So here is a rather “interesting” closing video. It focuses more on the Democrats than his Republican competitors.

[Apparently singer Adele objected to the use of her song, even though sung by someone else, so the ad was taken down.]

There are passing screen shots at Ted Cruz, such as this one with Glenn Beck. 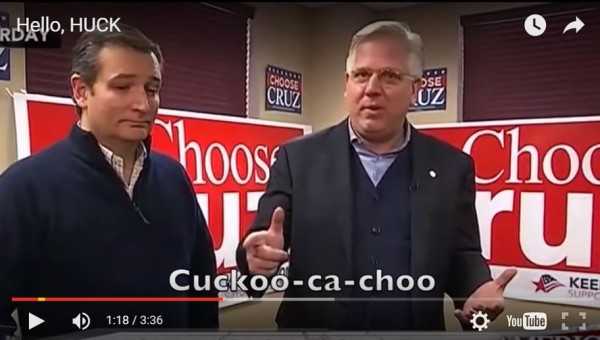 Maybe the idea is to lump Cruz together with Bernie and Hillary. Or to dissuade Democrats for crossing over and registering as Republicans for the Republican caucuses, thus perhaps lessening turnout for Trump.

And this one playing the Canadian card (it’s preceded on screen by a reference to Czech Village in Cedar Rapid): 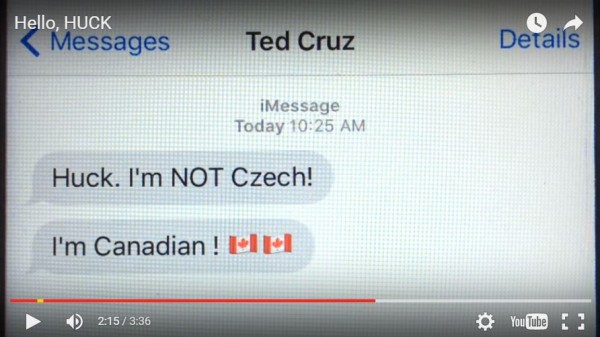 Clearly has Cruz on his mind.

Well, that had me wanting to open my veins…

From the OTHER lying, Progressive populist SOS in the race, a depressing lil’ “good-bye and FU, Iowa”…

Looks like proof he has campaign operatives trying desperately to be hip and edgy when they have little idea what is hip and edgy.

At first I thought it was going to be one of those “Bad Lip-Reading” videos.

Three minutes and thirty six seconds of that awful thing !!

Who was the Cucko-ca-choo that advised him on this ?

Why won’t he drop from the race already ?

An perfect example of what-not-to-tape for a campaign video.

Could be he’s finally accepted that he ain’t a contender. But he has a bunch of donor money to waste, so he is thanking them by producing an Adele knockoff that they can cherish for all eternity.

He is also subtly signaling to his supporters that he does not want them going to Cruz when he drops out.

Huck is just clearing the path for Santorum, who will once again be the surprise winner in Iowa.

At this point in 2012, Santorum was already rapidly rising in Iowa polls. Lightning won’t strike twice for him.

The huckster did this same type of thing when McCain ran against Romney. The other day he came out against Cruz’s religion saying he was not a true Christian. What the hell is that about? He needs to go back on FNC and forget about politics.

The whole “cuck” thing originated with white supremacist sites. Iowa is mostly white and was a hotbed of KKK activity in the early part of the last century. So it’s like a “Hail Mary” pass in desperation (except of course Huck hates Catholics, too).

When he drops out, it will be good riddance to bad rubbish.