Michael Reagan: “You can’t be a Trump Republican and a Reagan Republican.” 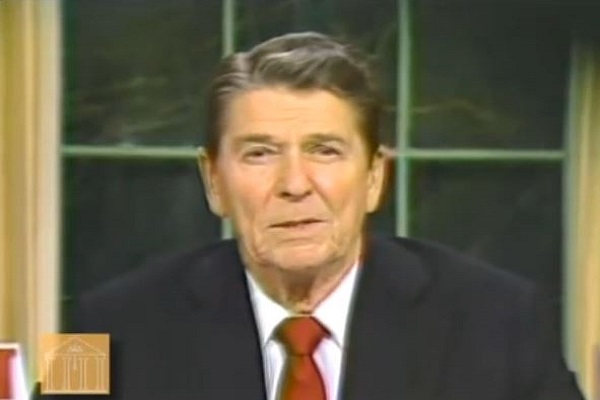 In response to questions about the business mogul’s previous status as a card-carrying Democrat, Trump said that he was in good company.

Michael Reagan takes issue with this comparison and penned a powerful response in The New Hampshire Union-Leader that begins:  “Mr. Trump, I knew Ronald Reagan. And you’re no Ronald Reagan!  Of course, I am stealing that line — with a twist.”

Donald Trump shouldn’t mind. He’s been stealing my dad for his own purposes. Trump frequently invokes Ronald Reagan’s name to defend his sudden, 180-degree switch from being a life-long, pro-Clinton Democrat to a Reagan Republican.

Both men did make a switch, but almost all the similarities between the two end there. Ronald Reagan’s odyssey from Hollywood liberal to conservative backer took place over almost two decades.

Starting with his 1964 “Time for Choosing” speech that galvanized Americans for Barry Goldwater, dad began a 16-year effort of crisscrossing America to support conservative candidates for office. My dad also served eight years as California’s governor. When he ran for President, he had a proven conservative track record.

Donald Trump doesn’t have one. In fact, Trump still can’t explain his sudden change from being a liberal Democrat. When dad ran in 1980, Trump donated the maximum amount to Jimmy Carter. As the Wall Street Journal reported, Trump also donated to a PAC for Walter Mondale, who ran against dad in 1984.Trump has criticized some candidates for their indiscretions made during their childhood. But what can you say for a grown adult who supported both Carter and Mondale over Ronald Reagan?

Reagan then goes on to share a lesson that he learned from his dad about judging people by their actions, not their words.

One of my dad’s most important lessons to me was how to uncover a phony. He told me not to judge people by what they say; judge them by what they actually do. As President, dad used this “trust but verify” principle on the Soviets and it worked. Voters today should apply Reagan’s verify principle on Trump.

During the 2008 election, Trump told CNN that he wanted President George W. Bush impeached. Then, during Obama’s first year in the White House, after he rammed through Congress a $800 billion stimulus and proposed a radical health care takeover, Trump praised the President, saying he was “amazing” and “truly phenomenal.”

Obama’s then chief-of-staff Rahm Emanuel was a player in passing Obamacare. Rahm eventually left the White House to run for Chicago’s mayor. In 2010, Trump actually donated $50,000 to Rahm’s mayoral campaign! Just last year Trump told “60 Minutes” he wants single-payer health care like they have in Canada and Britain. It’s nothing less than socialized medicine.

For most of his life Trump had been a Democrat, backing strong gun control and abortion rights. Today he says he’s for the Second Amendment and pro-life. But when asked who he’d like for the Supreme Court, he suggested his sister, a sitting federal judge. It turns out she’s liberal and pro-choice.

Reagan also notes that Trump, who now supports a “touch-back” amnesty program, lambasted Mitt Romney in 2012 for his, in Trump’s words, “crazy policy of self-deportation which was maniacal,” Trump said. . . .  “It sounded as bad as it was, and he lost all of the Latino vote,” Trump said. “He lost the Asian vote. He lost everybody who is inspired to come into this country.”

In short, Reagan states, “You can’t be a Trump Republican and a Reagan Republican. It’s time to choose.”

In an interview with NewsMax, Reagan had more to say:

Reagan also argued his father would be “absolutely appalled” if Trump wins the GOP presidential nomination.

. . . .  “I get so tired of people coming to me saying ‘he reminds me of your father’ and I just go, ‘how?'” Reagan said. “Donald Trump never supported Ronald Reagan. He supported [Walter] Mondale, he supported [Jimmy] Carter. Those are the people he supported against the nomination and election of Ronald Reagan.”

In light of Trump’s attempt to invoke President Reagan and of Michael Reagan’s response, it’s worth watching clips of both men during their respective debates and thinking about whether or not they are alike.

And next, then-Governor Ronald Reagan:

The important thing for me is that Trump took out Jeb Bush from being the heir apparent.

I’ll be very grateful for that, once Trump is out of the race.

I’m not a Jeb Bush fan, but how sad if we have to sell our soul to make a point. I do not trust Trump and worry that all these supporters have blinded themselves just like the Obama supporters have. Praying it’s not too late.

I’m not a great fan of Jeb Bush, but if it came down to it I’d much prefer him to Trump. He was a decent governor and would be a decent president. He wouldn’t do much to pull the country out of the hole, but at least he’d stop digging. We can do better, but we can do a whole lot worse. For instance with Trump.

“Do you want chocolate or vanilla?”

“I’m sorry, we don’t have strawberry today. Do you want chocolate or vanilla?”

It makes absolutely no difference to me whether I my sh*t sandwich is made with rye bread, white bread, or a baguette. It’s still the same sh*t. Your candidate is 0bama all over again, full of hopenchange and signifying nothing.

Trump had nothing to do with it — I doubt that the type of people who would have supported a Jeb-type candidate suddenly changed from milquetoast establishment moderate to fire-breathing Trumpian as soon as The One entered the race. A Venn diagram of Jeb! Republicans and Trump! Republicans would have have little or no overlap at all.

It’s fair to say Donald Trump is not a Reagan conservative.

Reagan famously donated his post movie star career to conservatism. Reagan’s biological children both wrote books saying that, given a choice between doing the right thing or the thing best for his kids, Reagan would always choose conservativism. He was principled, and it extended to his personal life.

Trump loves his children, and loves America. He’ll always do what he thinks is best for them.

Is loving one’s children now an exclusively “conservative” attribute? If so, a lot of people would be awfully surprised to discover that they’re “conservative.”

And let’s retire the absurd meme that Trump has some extra-special “love of America.” Any love of country he might have is far eclipsed by his reverence for himself.

But since the “Trump the real conservative” theme is severely compromised by facts, one must go with what one has.

And Reagan would never have told you that it was your “privilege” to vote for him. That’s a big difference from Trump, among many.

Hillary or Bernie? Who is your preference?

I’ve been seeing this “come back” a lot in comments both on LI and on other sites. Are you saying that Trump, being much more politically and ideologically aligned with Bernie Sanders and especially Hillary Clinton than with any Republican running, is your choice over these other two? That’s perfectly okay, of course, but it seems an odd way to try to sway conservatives who would never vote for any of the three you seem to lump together. But then again, maybe trying to sway others isn’t your intent. I just find it curious.

Actually, if you listen to that Reagan video – quite a bit of what he says is very similar in essence to what Trump says. On min wage – blacks in inner cities need jobs. On clean air – we need common sense regulation and private enterprise innovation, not stifling regulatory burden. On energy – unleash all of our vast resources. On world affairs – negotiate from a position of great strength and use force as a very last resort. Reduce government regulation on stuff the should be local? Can you say kill Common Core?

Trump might not have Reagan’s eloquence but I’m not so sure he doesn’t possess the same love of America and respect for her exceptionalism.

The “exceptionalism” that Trump talks about most is his own.

It isn’t only Reagan’s eloquence that Trump lacks. It’s also Reagan’s thoughtfulness, and depth of considered principles, and manners, and calm confidence tempered by humility, and basic decency. (Did Reagan feel a need to attack anyone who didn’t flatter him?)

What do they have in common? They both worked in the entertainment industry.

“On energy – unleash all of our vast resources.”

Duh Donald TALKS all sides of any issue, and he does things that contradict conservative positions…

Item 1: he not ONLY sold out to the market-distorting, tax-payer wasting, crony-enriching Iowa BIG CORN lobby for a few caucus votes, he now calls for INCREASING the mandates and other distortions. Solyndra, with corn.

Item 2: during his interview with Field and Stream, he made it clear that the vast West would stay Federal property AND he’d prevent developing energy resources under his “rule”.

In other words, he’s a liar. But he always has been.

Reagan’s track record as a conservative intellectual and activist goes much farther back than 1964. It goes back to 1954 when he began hosting General Electric Theater, and using it as a platform to explain conservative views to the public. So by 1980 nobody was in any doubt about his philosophy. He didn’t just adopt a few conservative positions ad hoc, because that’s what you need to do to win a Republican primary. He had showed that he believed in those positions, because he’d expounded for 25 years on the principles behind them.

Now what’s Trump got? What kind of idiot believes that he has any conservative principles, or even understands why we hold the policy positions he claims to have adopted to please us?

Lots to like in the comments. Thanks for standing up for conservatism and specifically Reagan conservatism guys.

Well I can think of 1 possible similarity that Trump has with Reagan: the Blue-Collar vote. We shall see.

Reagan did upset many old-timers from his central Illinois roots by not ever coming back. Do I hold that broken promise against him? No, but some very nice, old people hauntingly morphed into something else when they recalled the ‘broken promise’.

Trump is not a Republican at all, and certainly no conservative. Neither is he a business genius – most of his deals since “The Art of the Deal” flopped badly, and if he had invested his inheritance in a stock index fund instead of a long ego trip, he would be worth more than twice as much today.