Madaya – the starving town you probably never heard of

Madaya – the starving town you probably never heard of

Town near Lebanese border taunted on social media by Hezbollah and Assad supporters with photos of food. 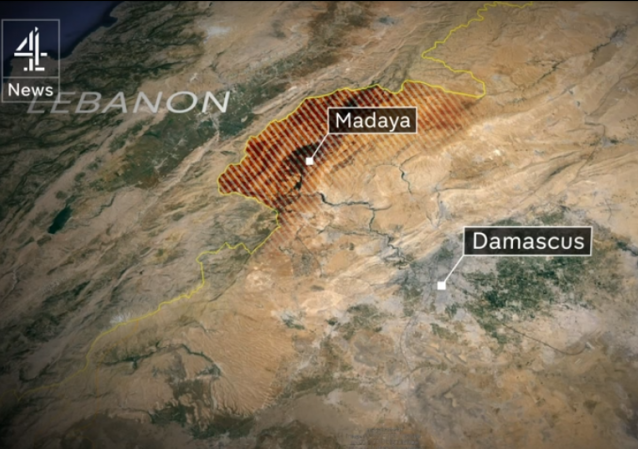 You probably never heard of Madaya.

It’s a town in Syria near the Lebanese border that has been under rebel control, and now is under seige by Hezbollah and the Syrian regime.

And the people are starving to death. That mass starvation has received very little media coverage in the U.S. until the past couple of days.

Doctors inside the besieged Syrian town of Madaya say five more people died of starvation on Sunday, including a nine-year-old boy.

The town of up to 40,000 people, near the capital Damascus, has been under siege by government forces and Hezbollah militants since July.

Twenty-eight people, including six babies, are reported to have died from starvation in the past month.

The latest deaths were confirmed by the international medical charity Medicines Sans Frontiers, who warned on Monday a further 200 patients could deteriorate to a critical condition within a week without urgent aid.

The residents have been reduced to eating dogs and cats:

Thousands of Syrian families are starving to death as Bashar al-Assad’s regime imposes a medieval siege on two mountain towns, despite a UN-brokered ceasefire designed to allow the entry of aid….

In Madaya, 40,000 civilians have been reduced to eating boiled leaves with leftovers from rubbish bins. In an interview with The Telegraph, the mother of a two-year-old child broke down in tears as she described the fight to keep her child strong enough to survive.

“There is nothing. Nothing. She’s so thin I see her muscles straining through her skin when she cries, and I cannot help. I am her mother and I cannot help,” she said, the infant’s screams ringing out in the background….

Abdullah, another local resident, said that he was surviving on strawberry leaves and had not eaten a full meal in three months. “When I saw this, I felt I was in Africa. We’ve had many wars in the Middle East, yes, too many wars. But we’ve never had starvation,” he said….

“People here have eaten cats, they have eaten dogs. But please do not judge them – this is what desperation looks like,” said Abdullah. 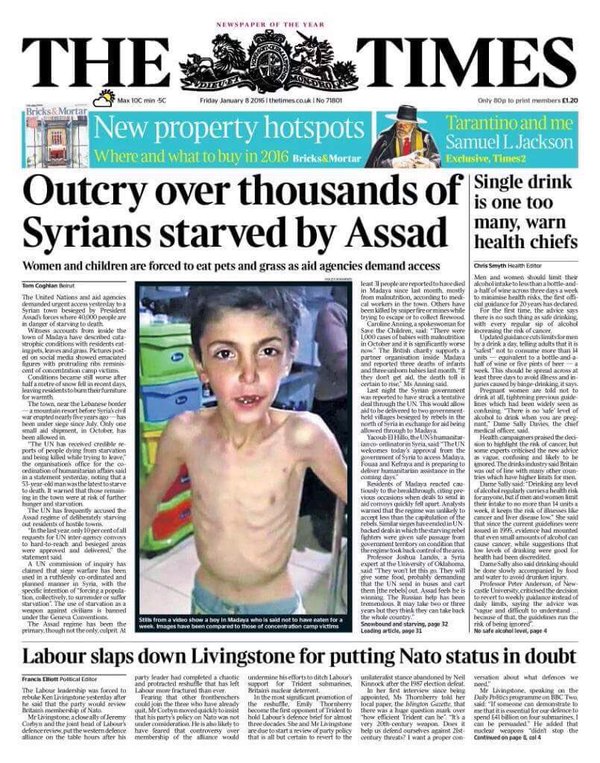 The NY Times has an article that just went live about how a promised aid convoy was not allowed into town:

The town, Madaya, is controlled by rebels and encircled by pro-government forces with barbed wire, land mines and snipers. The people in the town make soups of grass, spices and olive leaves. They eat donkeys and cats. They arrive, collapsing, at a clinic that offers little but rehydration salts. Neighbors fail to recognize neighbors in the streets because their faces are so sunken.

There are reports that Hezbollah and Assad supporters on Twitter are taunting the starving resident with photos of food. The Telegraph (Britain) reports, Assad supporters taunt starving Syrians in Madaya with pictures of food:

After years of war, barrel bombs and chemical weapons, supporters of Bashar al-Assad have still managed to find a new low.

Fans of the Syrian leader are using social media to ridicule the suffering of a rebel-held town where thousands of civilians are on the verge of starvation.

Although social media was initially used to highlight the plight of Madaya’s residents, regime and Hizbollah supporters are now using it to taunt, uploading photographs of their evening meals and cartoon characters that they say resemble the town’s starving residents.

Posted under the hashtag “solidarity with the siege of Madaya”, the images show plates overflowing with rice, fish and green vegetables.

Siege and starvation tactics are not unique to Hezbollah and Assad — the opposition ISIS fighters uses them too:

When it comes to Madaya, though, the blame has already been placed — on a Zionist media conspiracy:

'…war crimes denial…' Same lie repeated. Nobody 'denied' crimes. Only the well-coordinated Zionist campaigns to pin them on Hezbollah.

I made a bad mistake. I went to Donny Diggins twitter. Worse than dKoss.
Anti-American, check.
Anti-Semite, check.
Racist, check.
Communist, check.
Jews behind everything, check.

You probably never heard of Madaya

I heard of this maybe a day or so ago on network TV news (Saturday night?, I think CBS) except I didn’t get the name and I thought it was near Damascus. But here they are saying it near the Lebanese border – and 40 miles away – but they are also saying it is near Damascus. I am guessing it is the same town.

The earlier report said that now that there’d been some publicity or attention drawn to it, the Syrian government would probably allow one – but only one shipment of food. It was all in the process of being negotiated, so they knew.

One shipment is probably enough to take the high pressure off, because then people won’t be able to say truthfully that the Syrian government hasn’t allowed in any food since October 18, and it will too complicated to put on Twitter or in a headline.

People have somehow been able to maintain during the seige, though. I guess because either the telephone lines or electricity is still being allowed through or by wireless means.

Tonight, before reading this, I heard the TV report that the food was being allowed through.

Sorry. When I pictures such as these my mind turns to pictures of Christians being beheaded; crucified; burned alive.

I have no sympathy left for these.

So, the town that has been under rebel (i.e. ISIS) control is now starving? I have sympathy for the civilians, but this is the fault of Obama’s Arab spring and his support of the rebels.

Not of this would be happening if Obama had allowed our troops to finish their job in Iraq and Afghanistan, and had kept his nose out of other Middle East and African conflicts.

“the town that has been under rebel (i.e. ISIS)”

Is it ISIS or one of the other rebel groups, or just a town that Assad and Co. don’t like?

When the Russians have enough men and material in Syria, they can resolve the starvation PR problem by eradicating the town and its inhabitants, like they did to Grozny.

This is the fault of the “rebels”. Not Assad.

How do you reckon that? And why are you standing up for Assad and Hizballah?

I had a thought: The reason the Syrian government ket in the one shipment of food, was that they wanted to forestall an air drop of food.

They are still going for maximum starvation. They don’t want and don’t need people so ready to rebel, so they are not letting people leave either.

They want them dead, or as many as they cabn without getting arrested and sent to the international criminal court.