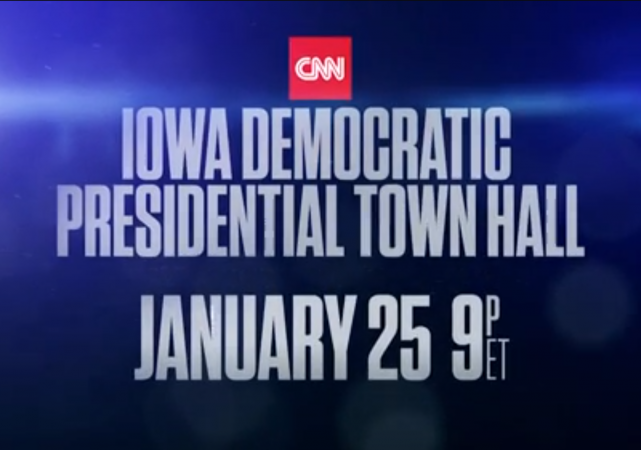 It’s over, some highlights:

What would @BernieSanders parents think of him now? “They wouldn’t believe it” #DemTownHall https://t.co/rvZtDybOgC https://t.co/vxjFUxjcDh

CNN explains how to watch:

The Democratic presidential hopefuls will make closing arguments to Iowa voters Monday night during a CNN town hall in Des Moines — one week before the first-in-the-nation votes are cast at the Iowa caucuses.

Sen. Bernie Sanders of Vermont will appear first, followed by ex-Maryland Gov. Martin O’Malley and then former Secretary of State Hillary Clinton, CNN announced Monday. Each will have 30 minutes onstage at Drake University’s Sheslow Auditorium and will face questions from audience members as well as CNN Anchor Chris Cuomo.

The Iowa Democratic Party and Drake University invited the audience, which will also include some CNN guests.

This event comes as Clinton tries to brush back a surprisingly strong challenge from Sanders.

The Town Hall will also be live-streamed online and across mobile devices via CNNgo. CNN International and CNN en Espanol will also simulcast the Town Hall.

Well, I’ve already made my predictions when this ‘debate’ was announced. Reposted below, we’ll see how accurate I was.

Full panic mode for the DNC. They’ve finally been shocked out of their little DC bubble and realized that Hillary is an unbelievably shitty candidate and is going to actually LOSE to Bernie ‘socialist’ Sanders.

Make no mistake. This ‘town hall’ is going to be complete theatre. Any ‘town hall’ event is 100% screened in advance, and every person with a question has their question carefully screened or outright planted.

Stand by for Hillary getting asked ‘war on women’ style questions about things like what kind of discrimination she faced as a woman in the State Department, about how hateful Trump is towards women, etc. They’re going to try and salvage her by using the ‘it’s not you, it’s just those terrible sexists that don’t want a woman President’ angle.

I bet there’s going to be a ‘question’ from a tearful woman asking about motherhood or some such BS.

Meanwhile watch for Bernie to get equally planted questions that he has been shielded from – namely ‘how the hell are you going to pay for this shit’.

And it still won’t work. Stand by for Hillary to fall behind Bernie and get indicted soon after as Obama isn’t going to take the fallout for shielding her if she’s not actually going to win the nomination.

Not going to tune in, but I’m curious if the pledge of allegiance is said at these events. (fair question for either party).

Don’t forget to count cameramen, producers, and other techies behind the scenes. That takes the viewership count up to well over ten or fifteen.

Hopefully she won’t have a severe-enough thyroid-induced hacking fit and drop dead on the stage before we see her indicted.

Hitlary is living proof of the sorry state of Democracy today.
Just the fact that she had the nerve to run for President, after being so bold, so openly corrupt, is nauseating.
But that’s not enough.
We have the whole Executive branch covering for her, plus the Democratic party going the extra mile to make sure nobody gets in the way, to make her President, corrupt and all.
It’s the Latin American ‘caudillo’ mindset, trying to drive America into a Banana Republic.

immediately turned TV off before losing any further IQ

Shes low Auditorium, an appropriate place for Hillary to make an appearance.

I didn’t even hear about this thing until this morning. No fair! I wanted to see the candidates. To be honest, O’Malley would have bored me to the point of going to bed early. I guess that was kinda the point…the fewer people who watch Hillary the better.