Is the GOP on the path to extinction?

Employees at Los Angeles’ La Brea Tar Pits arrived Monday morning to find three signs hung on an outdoor display of elephants. The elephants stand in and around one of the museum’s tar pits that have seeped natural asphalt for tens of thousands of years. The La Brea Tar Pits and Museum is an active excavation site where archeologists have found and continue to find countless fossils dating back to the Pleistocene epoch, or the earth’s last ice age.

A ‘hello my name is JEB’ tag hangs from the tusks of an elephant partially immersed in tar as a visibly worried baby elephant draped with ‘Rubio 2016’ watches on the perimeter. Another elephant labeled ‘establishment GOP’ observes the scene nearby. The scene is rich with anti-establishment overtones. Whether one agrees with the artist or not, it was a clever move.

The display was the work of conservative street artist Sabo, an ex-marine most known for his drive-by postings of politically inflammatory artwork. True to his abrasive form, he took to Facebook and commented on what he referred to as a “La Brea Tea Party.”

True to his abrasive form, Sabo took to Facebook with the following:

Posted by Unsavoryagents on Sunday, January 3, 2016

Although most of his work targets Democrat politicians and liberal celebrities, Sabo is becoming increasingly known for his criticism of the Republican establishment. His ‘Blacklisted and Loving It’ poster made rounds across the internet in 2014 after several copies were appeared on the streets of Beverly Hills before a Ted Cruz rally. 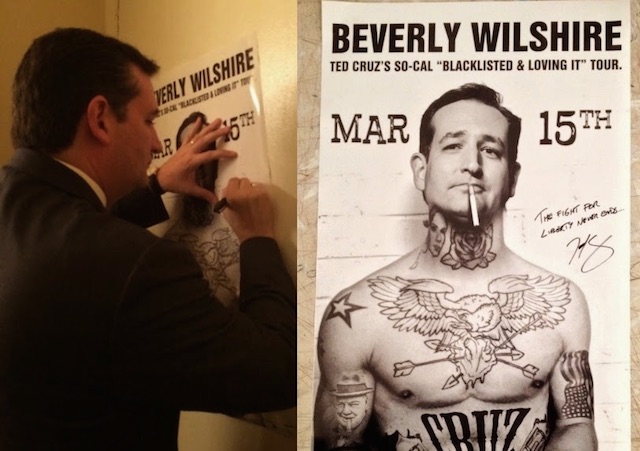 Oh that’s just darn near perfect! Topped off by the little Rubio!

Kudos and thanks for sharing — first place I’ve seen it is here.

i’d list Sabo as the prime suspect in this outrage…

didn’t see the rest of the article… good to know i can guess well.

But I think those are mammoths, not elephants.

If the GOP isn’t careful, it _will_ go the way of the Mastodon. It certainly is mired in tar of its own making.

Well, no. Note the skull shape of the La Brea models. Not to get into a bash with you on this, but compare the mastodon’s skull shape in your links. Also note the length of the legs.

Also, the La Brea people refer to them as mammoths. Jes’ sayin’…

I’ll concede the point. I guess they’re the Columbian not-so-woolly Mammoths as opposed to the woolly kind. Who wears wool in LA, anyhow?

Thanks for straightening me out! 😉

I couldn’t tell whether they were mastodons or just some form of elephant. (Yes, I did think about it!) The La Brea tar pit website has a photo of the American mastodon (go here and click “start” http://www.tarpits.org/la-brea-tar-pits/timeline ), but they don’t seem to resemble the “elephants” in the display outside.

Sorry. Accidentally hit the thumbs down.

May have to rethink my concession to Mr. Ragspierre after reviewing the timeline.

I know all of our comments are critical to the overall tenor of the discussion.

To be clear (given the article title), he is targeting the GOPe, not the GOP per se. Like cockroaches, they’ll never be extinct, they do belong on the endangered species list. They are lemmings once again scurrying off the cliff as we speak, part of some bizarre quadrennial ritual of political suicide.

But not merely lemmings: by their corruption and cowardice, they are insults to lemmings.

Is that mammoth/mastodon on the right Mitch McConnell?

Tar them all. And feather them!