Everyone put on your shocked face. 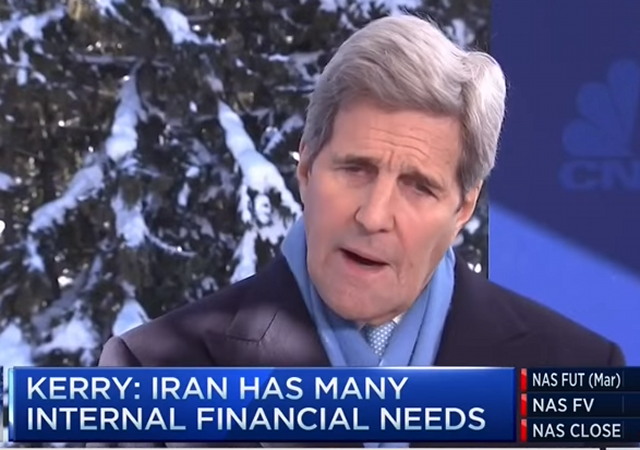 If you had any concerns about Obama’s Iran Deal rest assured, the news only gets worse.

Speaking to a CNBC panel yesterday, John Kerry admitted that some of the money the U.S. is giving to Iran is likely to end up in the hands of terror groups.

John Kerry: Some sanctions relief money for Iran will go to terrorism

Secretary of State John Kerry acknowledged to CNBC Thursday that some of the money Iran received in sanctions relief would go to groups considered terrorists.

When asked about whether some the $150 billion in sanctions relief to Iran would go to terrorist groups, Kerry reiterated that, after settling debts, Iran would receive closer to $55 billion. He conceded some of that could go to groups considered terrorists, saying there was nothing the U.S. could do to prevent that.

“I think that some of it will end up in the hands of the IRGC or other entities, some of which are labeled terrorists,” he said in the interview in Davos, referring to Iran’s Revolutionary Guard Corps. “You know, to some degree, I’m not going to sit here and tell you that every component of that can be prevented.”

But he added that “right now, we are not seeing the early delivery of funds going to that kind of endeavor at this point in time.”

“Other entities”? The “other entities” would include Hezbollah, Iran’s proxy army, which Iran directly funds and commands. The group (as “Hizballah”) has been on the State Department’s list of “groups considered terrorists,” as Kerry tries to slough off the context, since 1997. Hamas, the organization that Iran has directly armed, was put on the Foreign Terrorist Organizations list at the same time. Perhaps the Secretary of State needs a link to refresh his memory?

Or perhaps he could check in with Treasury on the status of the IRGC. They also have it on their lists as a terror-related group, which is why the US tries to block its access to international banking. The Quds force, a subsidiary unit of the IRGC, has its own listing at Treasury.

Last night on Greta Van Susteren’s show, former U.S. ambassador to the U.N. John Bolton pointed out that just last summer, John Kerry said this would be an impossibility:

As Lando Calrissian said in Star Wars, this deal is getting worse all the time.

When is it treason?

It’s been treason from day one.

The Dims do not give a rat’s ass about the rule of law.

“He conceded some of that could go to groups considered terrorists, saying there was nothing the U.S. could do to prevent that.”

Ummmm, the U.S. could NOT give it to them. THAT would prevent it.

So nauseating. Many Palestinians live in dire poverty, yet this doesn’t prevent Palestinian leaders investing in tunnel building and using poor Palestinian children as cannon fodder. These are totalitarian fascist societies where ideology trumps the welfare of the people. I would be surprised if a single dollar of the cash windfall provided by the Obama administration is spent on basic needs for the people of Iran.

He conceded some of that could go to groups considered terrorists…

Oh my God!
I am shocked!
How is this possible ?
Didn’t anybody think of this before …

This is nothing new – they said it when the deal was signed. The argument was, that Iran anyway gave supporting the war in Syria and forms of terrorism a high priority, so not too much more money would go there.

What’s happened since is that the price of oil has dropped.

It is now below $30 and selling at half of that by ISIS.

The U.S. by the way, is bombing, and has destroyed so far, nine depots of cash held by ISIS (mostly or entirely in Iraq)

They don’t know, or have not revealed, whether the depots are holding American dollars, European Euros or Iraqi dinars, or how much.

One would think that the same crowd who whines, “If it saves one child…” to justify [whatever] would be the ones sanely cautioning “If it benefits one terrorist…”, but no.

Lefties have no moral or logical basis for any of their positions.

With John Kerry giving away money to support terrorism and with Hillary Clinton glibly handling state secrets and with Eric Holder giving away guns to known narco-terrorists and with Barry Obama allowing into the country illegal immigrants full of disease and crime, we have met the enemy and they are…Deemocrats.

Following the deaths of hundreds of Americans at the hands of terrorists who were armed and financed by the government of Iran with monies linked to sanctions relief, today I am announcing the indictment of former Secretary of State John Kerry and former President of the United States Barrack Hussein Obama for violations of the following section of law:
18 U.S. Code § 2381 – Treason
Whoever, owing allegiance to the United States, levies war against them or adheres to their enemies, giving them aid and comfort within the United States or elsewhere, is guilty of treason and shall suffer death, or shall be imprisoned not less than five years and fined under this title but not less than $10,000; and shall be incapable of holding any office under the United States.
President Donald Trump

Only 2 lamer people to ever occupy the office of Secretary of State: Hillay Clinton and Madelline Albright. But it’s a close call.