Will the Bush family legacy be the primary victim of Jeb’s campaign? 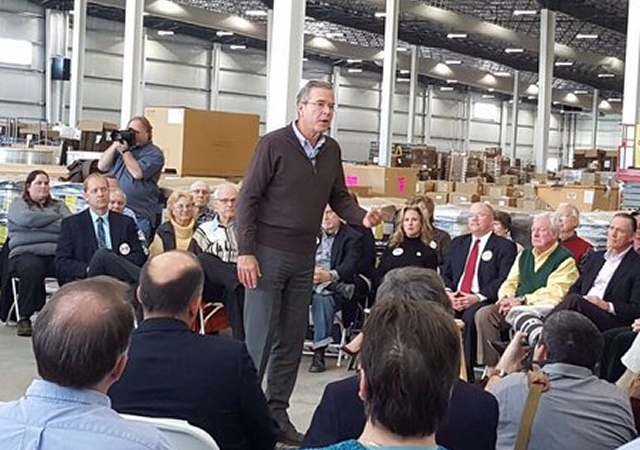 There is another Republican debate tonight and Jeb Bush will participate despite his lagging campaign and poll numbers. The Real Clear Politics average of polls has Bush at 4.7 percent.

Jeb’s message never caught on despite plenty of media attention and financial backing. It didn’t help that he is an establishment candidate or that he’s viewed by many as a legacy candidate like Hillary Clinton.

Bush has tried to jump start his campaign by attacking Donald Trump numerous times but that has backfired and worked in Trump’s favor. It might be time for the governor to call it quits.

Perhaps the most telling reason is this photo from a Bush rally last night:

The latest Jeb rally. He should just drop out. This is seriously ridiculous. pic.twitter.com/jbSKpnS7xv

Bush is also getting a message from party insiders.

Jeb Bush called Tuesday for a “leader with a servant’s heart.”

“We need a nominee who knows it’s not all about him,” the one-time GOP front-runner said.

But, increasingly, establishment Republicans worry that Bush’s campaign is little more than an ego trip. With the former Florida governor now sitting stagnant in the middle of the pack and his super PAC ratcheting up its attacks on Marco Rubio, a growing number of Republican centrists are coming to view Bush’s campaign as a distraction — one that could hurt their ability to keep the nomination away from Donald Trump and Ted Cruz.

On Monday, the Right to Rise PAC hit the early state airwaves with an ad skewering Bush’s former protégé for flipping on immigration—an issue on which he and Bush actually agree. And on Tuesday, the group unleashed a second ad that portrayed Rubio as a flip-flopper and mocked his heeled boots.

These attacks aim to clear some space for Bush in the establishment lane of this sprawling primary fight with the Iowa caucuses just weeks away. But to those who no longer believe Bush can win the Republican nomination, his super PAC, with tens of millions of dollars left to spend, looks more like a wrecking ball meant to lay waste to the one contender many Bush donors see as the last remaining mainstream alternative to Trump or Cruz.

Anna Palmer, also of Politico reports another blow for the governor:

The pro-Jeb Bush super PAC Vamos for Jeb 2016 is shuttering its doors.

The group, which was formed by political website Elephant News founder Claire Hardwick, sent a letter to the Federal Election Commission Tuesday announcing its decision to disband.

“The committee has not raised nor dispersed any funds and would like to accordingly terminate and be discontinued,” wrote Andrea Wong, the treasurer for the super PAC. “Up to this point the only activity done were social media pages on Twitter, Instagram and Facebook which have been deactivated.”

Expect Bush to continue attacking Trump in the debate tonight.

It’s all he has left.

That photo makes Jeb look like a warehouse manager who’s just called an impromptu meeting with his employees.

Meanwhile the photos of Trump’s rallies look like rock concerts.

I heard there were 12,000 people packed into Trump’s rally in Florida last night. What separates Trump from the other candidates is that Trump’s ‘gatherings’ require ARENAS while the others use town halls.

The ads coming from Right to Rise have been universally terrible. One ad actually shows images of three of the Republican candidates sitting behind the desk in the Oval Office. The narrator tries to tell you why they should not be behind the desk (I can’t remember any of the reasons), but I do remember the image of them looking presidential sitting in the Oval Office – American flag in the background.

I don’t want to see any of you lifting with your back and not your legs.

He pissed off the UPS driver who was waiting off to the side to pick up those packages.

Both Bush presidencies were extremely destructive to the GOP. So to all but the corporate globalists and big money donors that own the Bushes and GOPe their legacy was already quite harmed.

Agree. Bush-1 was, IMO, an honorable man who served the country in many ways. But he was not particularly sympathetic to the ideals I hold dear.
W was a better-than-expected guy, and the victim of really nasty leftie propaganda. On a personal level I think he treated common citizens, gov’t workers and our military people with a lot of respect. I don’t consider him an elitist. But he did little to restrain the Repub Congress, which blew the credibility of the Party in many ways.

What Bush family legacy? The near collapse of the Republican party?

Hillary’s usually draw 100 or so. The only campaign to rival Trump’s, as far as people showing up and being excited, seems to be Bernie’s.
I, however, Trump would talk about his policies as President. Such as:
1 – How will he deal with the deficit and debt? in 4 or 8 years, will the national debt be twice what it is now, half, or somewhere in between?
2 – What will he do to reign in the size and scope of government? Will the EPA and IRS still have a free hand to control our lives? This includes the habit of Congress to spend…spend…spend and pretend it is all necessary.
3 – What will he do to restore trust in the Rule of Law in this country. At this time, only the little people are subject to the law. (make Ted Cruz the AG).

These things are important to me. I love this country and would see it restored to greatness, can/will Trump do this? I want him to but…
4 –

Your questions are excellent and legitimate ones. I also believe there is not a single candidate – Trump included – that will address them.

Will this hurt his legacy?

I assume you are talking about his actual legacy and not merely about what liberal historian will write about him in the future. We already know what they will write.

His son George P. Bush is handsome, articulate, has a beautiful wife, a bright future, and he just got elected to statewide office in Texas. (This is not his son who got a DUI and just married an Iraqi with a Jordanian passport or his daughter who is a cocaine junkie constantly in rehab).

On the one hand, Bush’s campaign is literally hurting his son, because his son is getting criticized for being away from his job campaigning for his dad.

I have little doubt Jeb Bush is a decent man. He is far from the first to realize too late his time in the political sun had passed and that the audience he would address is not nearly the same that placed him in position to run in the first place. His last GOP nomination opportunity was 2008.

Someone that clueless has no business running for anything.

The loser Jeb can perform a great service to his country by helping eliminate Rubio.

The loser Jeb can perform a great service to his country by going away. Go on a nice long vacation to Mexico. Have a good time. If you get lonely, call Hillary and get some nice warm heartfelt encouragement. Invite Chelsea to join you. It would be an act of love.

Back approx. 3 years ago, the person who known him and loves him the longest gave Jeb the advice not to seek the Presidency. But like many, he thought his mother was either being biased and/or just being the “Mother Protector”. Either way, he should have listened to Barbara.

Maybe Team Jeb thinks they’re like the Seattle Seahawks … asleep at the wheel until like 3 minutes left in the 4th quarter then zoom to the lead on some freak play … except the Jeb-meister ain’t got no ‘zoom’ in him.