A whole world of trouble 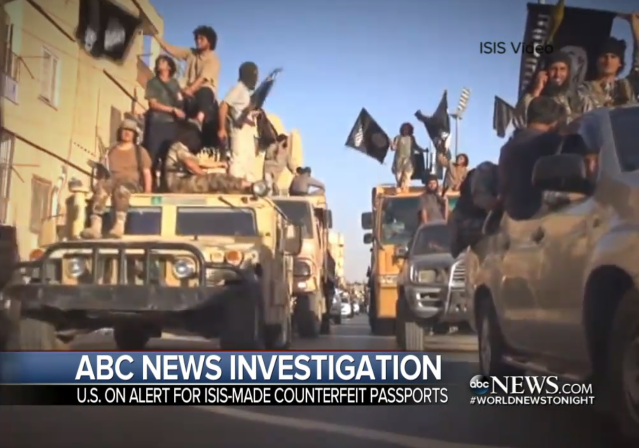 After obtaining blank passports, ISIS has successfully printed virtually undetectable counterfeits. It’s unclear whether any of these fake passports have been used to enter the United States.

The terror group ISIS has created a whole “industry” out of the production of fake passports, a high-level French official said today.

French Interior Minister Bernard Cazeneuve told reporters that through ISIS’s operations in Syria, Iraq and Libya, the group has acquired blank passports and has now set up a “real fake document industry.” Cazeneuve made the statement following a meeting with top European officials where he proposed setting up a new task force to help nab people attempting to come into the European Union with fake papers.

Last month ABC News reported that U.S. intelligence suspected ISIS had acquired thousands of blank Syrian passports and at least one passport printing machine after taking over government offices in Syria. Officials from Homeland Security Investigations (HSI) said in a 17-page report that the terror group has likely been able to print legitimate-looking Syrian passports since at least last summer – and raised the possibility that people using the forged documents have snuck into America.

“Since more than 17 months [have] passed since Raqqa and Deir ez-Zour fell to ISIS, it is possible that individuals from Syria with passports ‘issued’ in these ISIS-controlled cities or who had passport blanks, may have traveled to the U.S.,” the HSI report says.

The report notes that the primary source for the information was rated at “moderate confidence,” the second-highest rating given for source assessments. Testifying before lawmakers days after the HSI report was circulated to American authorities, FBI Director James Comey first publicly revealed the nation’s top security officials’ very real anxiety over the problem.

“The intelligence community is concerned that they [ISIS] have the ability, the capability to manufacture fraudulent passports, which is a concern in any setting,” Comey said.

Fake passports were used by two of the Paris Bombing attackers.

Sounds like a Dim argument for open borders. We can’t tell whose passports are legit anyway, so why even try? FORWARD!!!!!!

How about we stop ALL immigration from the M.E. For the next 5 years. These people want to KILL US. Why do we want them here.?