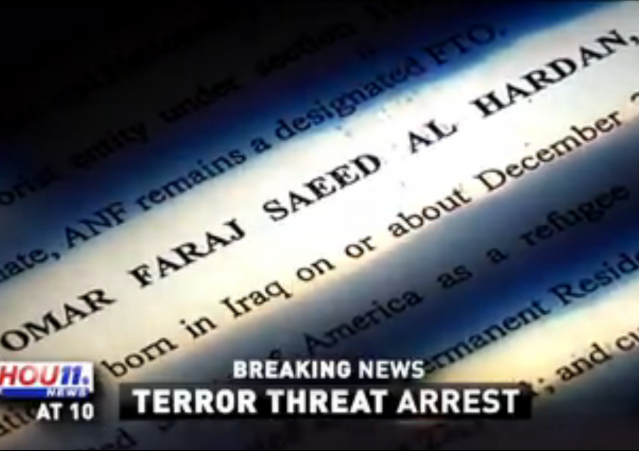 Thursday night, news broke that federal authorities arrested two Iraqi immigrants. One in Sacramento, California, the other in Houston, Texas. Both individuals were arrested for allegedly lying to immigration officials about their connections with terrorist organizations.

According to Houston local news, the Sacramento and Houston arrests were related. But CNN reported the arrests, “did not appear to to be directly related, but the cases had several similarities.”

Federal agents in Houston and Sacramento have arrested suspects in an ISIL-related terror plot, the Department of Justice has confirmed.

The U.S. residents were in contact with ISIL supporters overseas, according to the federal indictments.

The Houston suspect is 24-year-old Omar Faraj Saeed Al Hardan. He is a Palestinian born in Iraq who has lived in Houston for about a year.

Sources say Al Harden became radicalized after moving to the U.S. in 2009. He is charged with one count each of attempting to provide material support to ISIL, procurement of citizenship or naturalization unlawfully and making false statements.

“Based on the facts, as we know them, today’s action may have prevented a catastrophic terror related event in the making and saved countless lives,” said Texas Lt. Governor Dan Patrick.

The indictment alleges that Al Hardan attempted to provide material support and resources, including training, expert advice and assistance, and personnel to a known foreign terrorist organization.

According to the allegations, he also lied on his formal application to become a naturalized U.S. citizen by saying he was not associated with a terrorist organization.

The indictment further alleges that during an interview in October 2015, Al Hardan lied and said he’d never received any type of weapons training, when he allegedly received automatic machine gun training.

“There is no current threat to public safety associated with this arrest,” Angela Dodge with the U.S. Attorney’s Office said in a written statement.

He’s accused of traveling to Syria to “take up arms with terrorist organizations.” He reported his actions on social media, according to authorities.

According to the complaint, Al-Jayab is also a Palestinian born in Iraq, who came to the United States as an Iraqi refugee in October 2012. He has also lived in Wisconsin and Arizona.

The Sacramento Bee has one of the most detailed reports currently available:

Federal agents have arrested an Iraqi refugee in Sacramento on a charge that he lied to immigration authorities over his ties to terror groups and travel to Syria, where he allegedly fought before returning to the United States in 2014.

Aws Mohammed Younis Al-Jayab, 23, an Iraqi-born Palestinian, is named in a criminal complaint filed Wednesday in federal court in Sacramento and unsealed late Thursday as word of his arrest began to spread.

He is to appear in federal court on Friday at 2 p.m.

“Aws Mohammed Younis Al-Jayab allegedly traveled overseas to fight alongside terrorist organizations and lied to U.S. authorities about his activities,” U.S. Assistant Attorney General John Carlin said in a statement. “The National Security Division’s highest priority is protecting the nation from terrorism, and we will continue to hold accountable those who seek to join or aid the cause of terrorism, whether at home or abroad.”

Word of the complaint came amid reports of terror-related investigations in Milwaukee and Houston and the announcement of another Iraqi refugee being arrested in the Texas city.

The arrest of Al-Jayab, who is being held in the Sacramento County jail without bail, was confirmed by U.S. Attorney Ben Wagner’s office in Sacramento.

“According to the allegations in the complaint, the defendant traveled to Syria to take up arms with terrorist organizations and concealed that conduct from immigration authorities,” Wagner said. “While he represented a potential safety threat, there is no indication that he planned any acts of terrorism in this country.”

The criminal complaint and 18-page supporting FBI affidavit say Al-Jayab emigrated from Syria to the United States in October 2012, where he initially lived in Tucson, Ariz., and then moved to Milwaukee before traveling overseas.

While he was living in Milwaukee, Al-Jayab allegedly began communicating with individuals in Syria about traveling there and about his past experience fighting overseas, the complaint says.

“America will not isolate me from my Islamic duty,” Al-Jayab allegedly wrote on April 8, 2013, to one acquaintance. “Only death will do us part. My only wish is to see you and start the action.”

At one point, Al-Jayab wrote to another person that “I am at the shooting club. I want to learn long-range shooting,” and sent photos from a gun range in Wisconsin as well as photos of himself with various weapons, the complaint states.

In January 2014, Al-Jayab returned to the United States on a flight from London to Los Angeles and, later, Sacramento, the criminal complaint states. Upon entering the country in California, the complaint states, Al-Jayab listed only Jordan and the United Kingdom on a customs form listing where he had traveled.

In June 2015, Al-Jayab was interviewed again by FBI agents and told them “voluntarily and without solicitation from the FBI” about travel problems he was having at an airport, the complaint says.

“During that interview, Al-Jayab stated he had traveled to Turkey for a vacation,” the complaint states. “He denied traveling to Syria.”

Based upon Al-Jayab’s statements and evidence gathered by federal agents, there is “probable cause to believe” he went to Syria and was a member of a rebel group and provided material support to a terror group, the complaint states.

Al-Jayab, who has relatives in Sacramento, faces up to eight years in prison and a $250,000 fine if convicted.

The report listed above by the Sacramento Bee also mentions an arrest in Texas City, Texas, but we found no confirmation of any such arrest. Texas City is located in Galveston County, situated on Texas’ Gulf Coast.

Word of the complaint came amid reports of terror-related investigations in Milwaukee and Houston and the announcement of another Iraqi refugee being arrested in the Texas city.

Still unclear is the Wisconsin connection. Again, CNN reported the incidents appeared to be unrelated and the Sacramento Bee reported arrests were reportedly made in various locations, but not that they were connected. However, yet anther Houston local news outlet reported:

KPRC reported Thursday evening that the Texas suspect has lived in Houston for several years and was in contact with people in Milwaukee and Sacramento.

In accordance to current immigration procedures, both will be released on their own recognizance until a hearing, which may or may not take place in the next year or two.

Until then, see something, say something! (Unless it involves a muslim, then you are a racist pig!)

Key words in each article are “Palestinian born in Iraq” and “Iraqi-born Palestinian.”

The term “Palestinian” is an artificial construct, designating that somebody in the family once moved to Palestine and claimed citizenship there, typically for the purpose of exterminating Jews. Once a person does this, his progeny are treated as permanent non-citizens available for use as cannon fodder by the surrounding Muslim regimes.

For example, Saddam Hussein took in Palestinians and their families, and then allowed them to live in the houses he had confiscated from whoever had lost his favor at the time. Hussein also publicly financially rewarded families who had their sons killed in “suicide” bombings.

These families were treated as interlopers by the local Iraqis, and their children were not allowed to claim citizenship in Iraq.

I see a huge injustice in this, because the sins of the father have been visited on the children, for several generations, now. However, those sins have demonstrably produced damaged people who commit terrible acts, often with the public approval of their parents. I wonder how the State Department ever saw fit to allow such families to immigrate to the US, especially in light of their refusal to allow in Iraqi translators who helped out our own military, at great risk to themselves and their families.

Send ’em both to Club Gitmo!