The strains are showing throughout Europe from the current wave of migration from Muslim lands.

The latest to bow to reality are Sweden and Denmark, which just implemented border controls. The Christian Science Monitor reports:

Denmark and Sweden tightened their borders on Monday in efforts to stem the flow of migrants entering Scandinavia from Germany.

Just hours after Swedish rules went into effect requiring train passengers traveling from Denmark to show ID, the Danish government announced it had beefed up border controls with Germany as of noon Monday (1100 GMT, 6 a.m. EST).

“We are introducing temporary border controls, but in a balanced way,” Danish Prime Minister Lars Loekke Rasmussen told reporters in Copenhagen, adding there would be no problem for “ordinary” Danes and Germans to cross the border.

It was something of a ripple effect, with Sweden acting first at the Danish border, then Denmark acting at the German border so that migrants on the way to Sweden did not get stranded in Denmark. The NY Times reports:

Sweden, once one of the most welcoming of nations for refugees, introduced new identity checks on Monday for travelers arriving from Denmark. Fearful that migrants who otherwise would pass through on their way to Sweden would now be unable to leave, Denmark swiftly moved to impose new controls on people traveling via its border with Germany.

The moves by the two Scandinavian countries represented another step in the erosion of the ideal of borderless travel across most of the European Union, amid rising concerns about the costs imposed by the tide of migration and fears that terrorists are seeking to enter Europe masquerading as refugee

Sweden’s The Local reported on how the controls worked:

Alexander and Monica Klein from Malmö were among the first to go through one of the 34 checkpoints that have been set up at Copenhagen airport’s Kastrup train station.

“There were no problems. I knew about this so I just had to show my driving licence,” Alexander Klein told the TT newswire.

A total of 150 security staff have been stationed at the airport to oversee the controls. Under the new rules, rail commuters have to exit the train at the airport and go through checkpoints before boarding the train again in order to travel onwards to Sweden. Those without valid ID are refused entry.

It is the first time in half a century that Sweden is demanding photo identification for all travellers from Denmark and deals a blow to Europe’s cherished passport-free Schengen system. Only passports, driving licences and Swedish national identity cards will be accepted by the authorities.

This chart shows the increase in border barriers in the Schengen area. 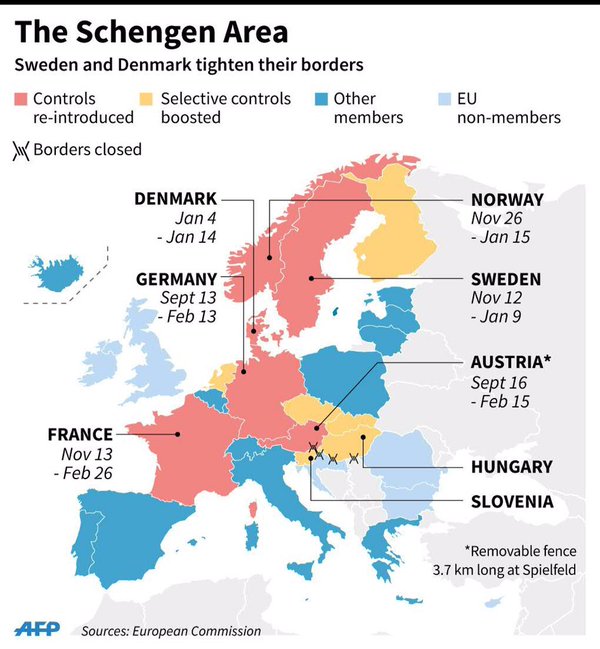 The Islamification of the EU won’t be stopped or reversed unless there are fewer Muslims next year than this year, in both relative terms and absolute terms. Otherwise it is too late, you are only delaying the Islamic conquest.

It’s time to allow private ownership of guns in Europe.

Let’s start telling Europeans how to live their lives. Maybe we can be condescending and snotty about it in the process. After all, they have been looking down their noses at us for 200+ years!

Following western leftist logic, shouldn’t we be now accusing The Schengen Area leaders of causing radicalization of the existing Muslims in the region if not globally?

Racists. Don’t they have any compassion for poor widows and orphans?

I am thinking that making more widows in some of these Muslim countries would be a good thing. They mostly wear black anyway, so they would not even need a new wardrobe.

As I understand it this is a little more than a papered over legalistic distinction. In Sweden all one need do now is declare oneself a ‘refugee’ instead of a migrant and the Swedish officials have to wave you in pending a formal hearing on refugee status. The left, especially the media went to great lengths to paint these people AS ‘migrants’ in order to both soften the perception of their arrival and to vaguely paint their critics as racists. That peculiar wording has come to hurt them but they still have an out – this ‘refugee’ nomenclature as a way to appease the the people who’ve started complaining AND allow themselves to continue full speed ahead as before.

It’s the classical chicken and egg paradox, but we know the order of their creation.

Anti-native policies in the Middle East, North Africa, etc. caused and sustain the refugee crisis, which is fueling the anti-native crises in Europe, America, etc.

It seems that the anti-native policies are motivated by a minority class that has grown impatient with the low number of women participating in the selective-child (i.e. pro-choice) population control scheme intended to marginalize and depress the native populations in Europe and America.

Perhaps the Russian coalition will succeed to defeat the anti-native policy that is the cause of the current crisis. The rest will be up to women and men in each society to establish a suitable religious/moral philosophy (i.e. behavioral protocol) and to make love, not abortion in order to realize stability and fitness.