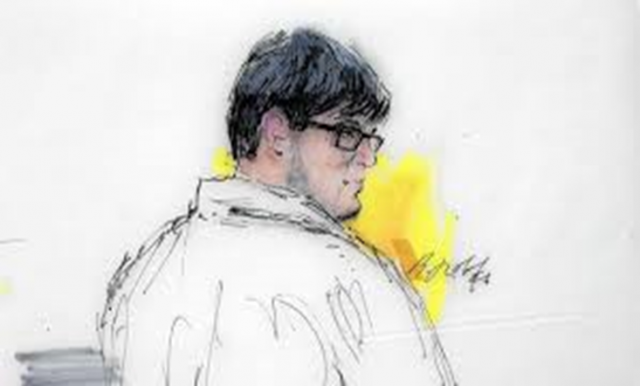 We recently reported that Enrique Marquez was indicted by a federal grand jury of conspiring with San Bernardino terrorists Sayed Rizwan Farook and Tashfeen Malik.

He just pleaded “Not guilty.”

The man accused of supplying guns to the San Bernardino, Calif., terror attackers pleaded not guilty Wednesday to conspiracy and other charges.

Enrique Marquez Jr., 24, is charged with two counts of lying on forms in the alleged “straw” purchases of two assault rifles used in the attack Dec. 2 at the Inland Regional Center. Marquez is also accused of conspiring with shooter Syed Rizwan Farook in 2011 and 2012 to provide material support to terrorists.

Two other charges — fraud and making false statements on immigration documents — are related to an alleged sham marriage. His trial is now set for Feb. 23.

Investigation into Marquez and his activities has revealed he was often intoxicated and would ask people for the prescription drug, Adderall:

The man accused of helping San Bernardino shooter Syed Farook acquire his guns loves punk rock and once called himself “G-Man,” according to new video obtained by ABC News.

In the video, Marquez appears sitting on a couch at a party in late 2014. The camera closes in on his face as he asks, “Hello, how’s it going?”

“My name’s G-man,” Marquez says to the camera.

“We had huge six to eight dozen people parties. He would just show up at almost all of them,” Stone said. “He was intoxicated… he would always ask people for Adderall”

The state Senate and Assembly set aside part of their morning floor sessions to talk about the men and women who died in the Dec. 2 attack. Sen. Connie Leyva (D-Chino) read the names of those killed as part of a motion to adjourn in their memory.

“The shock and the grief that the entire Inland Empire community has suffered over the last month and will suffer for a long time simply has no words,” Leyva told her colleagues.

The legislature would better spend its time trying to patch-the-holes in the approach that the federal government has been using to assess the security risks of immigrants such as Malik, including the lack of attention to posted social media threats.

Kemberlee Kaye pondered the one-year anniversary of the Charlie Hebdo attack, and assessed what had changed over the past 365 days as a result of that massacre. I predict that 365 days from now, nothing much will have changed as a result of the San Bernardino attack, in terms of effective government deterrence.

However, I do hope that over the ensuing months, Marquez is convicted of conspiracy in this slaughter and we do not see another such incident in this country.

off topic, but here is why trump will win the nomination. This is especially true for blue states like Wa and Or.

Dems will jump party lines and they ain’t backing Cruz (who is my favorite).

Use the Tip Line for off topic stuff like that. Please don’t try to make every blog post here All Trump All The Time.

I somehow doubt his freely talking to police/FBI for a week will help his case.

So he’s pleading Not Guilty by reason of Stupidity?

Well, you’ve got to allow…he has a case…

They made plans for terrorist attacks in 2011 and 2012 [two different plans – the first one in their former school, and the second one on a highway] but these plans were abandoned.

Enrique Marquez was also separately indicted for purchasing two rifles under his own name, which, the indictment says, were really for Sayed Rizwan Farook. Except that at least one of them was for him! Originally. There was the thinking that his name would be less suspicious or something.

This woman, from Russia, had a different boyfriend and a child, and they were also recorded in a bug talking with the woman about possible problems poor worry passing the interview.

Marquez did not know about the San Bernardino attack and there is no claim that he did. He was working as a security guard at a Walmart when it happened and he and his paper wife were scheduled for an immigration re-interview the next day.

* the sister of the wife of Syed Rizwan’s Farook’s brother.

* recorded in a bug talking with the woman about possible problems or worry passing the interview.

Also, in the quote: Enrique Marquez was indicted by a federal grand