Democrats for The Donald?

Democrats for The Donald? 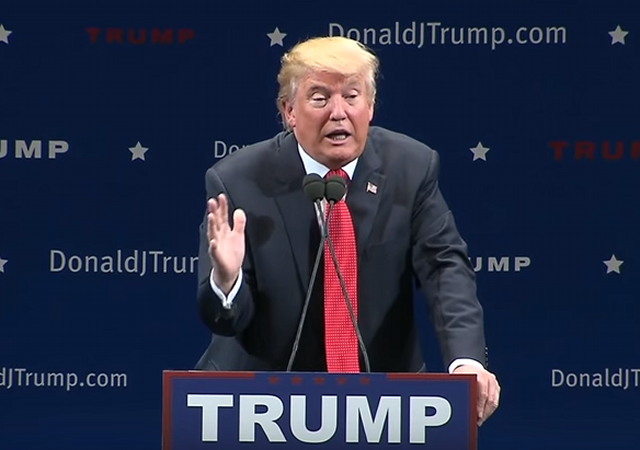 A new survey shows that Donald Trump has bipartisan appeal and that some Democratic voters would abandon Hillary to vote for him in a general election match-up.

If you enjoy imagining nightmare scenarios for Democrats, you’ll love this.

James Warren of U.S. News and World Report has the story:

Trump Could Win It All

So if Donald Trump proved the political universe wrong and won the Republican presidential nomination, he would be creamed by Hillary Clinton, correct?

A new survey of likely voters might at least raise momentary dyspepsia for Democrats since it suggests why it wouldn’t be a cakewalk.

The survey by Washington-based Mercury Analytics is a combination online questionnaire and “dial-test” of Trump’s first big campaign ad among 916 self-proclaimed “likely voters” (this video shows the ad and the dial test results). It took place primarily Wednesday and Thursday and has a margin of error of plus or minus 3.5 percent.

Nearly 20 percent of likely Democratic voters say they’d cross sides and vote for Trump, while a small number, or 14 percent, of Republicans claim they’d vote for Clinton. When those groups were further broken down, a far higher percentage of the crossover Democrats contend they are “100 percent sure” of switching than the Republicans.

When the firmed showed respondents the Trump ad, and assessed their responses to each moment of it, it found “the primary messages of Trump’s ad resonated more than Democratic elites would hope.”

About 25 percent of Democrats “agree completely” that it raises some good point, with an additional 19 percent agreeing at least “somewhat.”

Donald Trump’s rise is causing lots of people on both sides to panic which is why we’re seeing unhinged columns like this one by Sean Kennedy at CNN:

Donald Trump must be destroyed

With less than a month until the Iowa caucuses, followed immediately by New Hampshire’s first-in-the-nation primary, it’s time the conservative base and Republican establishment destroy Donald J. Trump — before it’s too late for the party, the conservative cause, and the nation.

To save our republic and the Republican Party, a senator from a different era offers a roadmap.

The great Roman orator Cato the Elder had a fierce hatred for Rome’s mortal enemy, Carthage. So much so that Cato would end every speech, regardless of topic, with a reminder — “Carthago delenda est” — Carthage must be destroyed.

Cato rightly saw the Carthaginians as an existential threat to the Roman Republic. Like Carthage, Trump is a behemoth with sway over the same territory that the GOP covets.

None of that seems to bother Trump. In fact, it looks like he’s having a ball.

Great even in SC tonight! Fire Marshall would not let everyone in– 5,000 turned away. Thank you for coming!

South Carolina rally last night was so unbelievably exciting (and fun). I am now off to Iowa for two big rallies – packed houses. Love it!

His enthusiasm is definitely part of his appeal.

No. I can believe many Democrat voters voting for The Donald in the primary just to mess with the Republicans, but I can’t picture any of them voting for him in the general election.

Likewise, I can see the primaries coming down to Cruz/Trump/Rubio and the GOPe determined to get Cruz rooted out at any cost, even if it means electing H. (Hm, a Rubio/Cruz ticket?)

The truth is the truth whether you believe in it or not. Besides this poll there is plenty of other available evidence that Trump pulls democrat voters just like Reagan did. The Reagan democrats are back. Trump is the most electable GOP general election candidate.

Union leaders are publicly complaining that many of their members will vote for Trump. Some here desperate not to believe come up with all kinds of ridiculous reasons not that it isn’t true. They miraculously invent false flags, magic rabits and briar patches. They use these flags and rabits to reassure themselves of their superior deep thinking and political smarts.

I don’t think dems are jumping the fence to mess with the GOP the way the GOP tried to do with Hillary/Obama in 2008… (maybe what you are asserting…?)

However Dems WILL jump the fence for the primaries- especially in states like Wa and Or which haven’t gone red in a presidential race in decades.

Yeah these probably are the closest thing we will see to Reagan Democrats our generation.

GEEZE- Does that mean in 30 years a guy like Bernie will be the most conservative candidate to win??????

Just to say it, when Cato the Elder was doing that song and dance, the Second Punic War was long in the past, Carthage paid reparations for 50 long years and was a shadow of its former self, and after that, when Rome’s ally Numidia launched military raids (sparking pitched battle which Carthage lost), Rome invaded. First, Rome demanded 300 hostages from well-born Carthaginians; these were handed over. Second, Rome demanded all arms and armor; these were handed over. Third, Rome demanded that the city be rebuilt 16 kilometers or more inland (i.e. completely severed from the sea and condemned to poverty forevermore) while the original was burned. Only then did Carthage resist.

There’s lessons to be found there, but I don’t think they’re really about the eternal wisdom and grandeur of Cato the Elder and warning about the dire Carthaginian threat

Unfortunately you’re talking about history. The only thing we learn from history is that we learn nothing from history.

In that Mercury Analytics survey, what was the bottom line? That U.S. news and world report article doesn’t seem to tell us.

Every survey shows Donald Trump doing several points worse in the general election against Hillary Clinton than any other Republican – and usually, or always, losing. (They don’t show – yet – a Goldwater or McGovern size debacle, and never have.)

Not true. Latest poll has Trump on top of Hillary and these polls understate Trumps performance because the poll models don’t factor in Trumps support from democrat voters.

Trump on top of Hillary

I agree with your post, but Bill “Cosby” Clinton might enjoy watching this part of your posting the most.