particularly when done by a young while male. 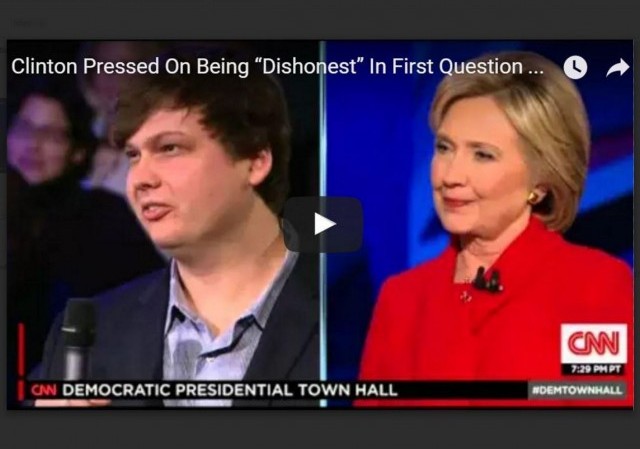 Hillary has an honesty perception problem, and everyone knows it.

That problem surfaced at the CNN Democratic Town Hall the other night, when a young man in the audience questioned Hillary about it:

Hey, remember when speaking truth to power was a supposedly liberal ideal?

To Joan Walsh, well-known liberal writer and agitator formerly for Salon now for The Nation, the young man’s question was pretty impertinent. Particularly since he’s male and white. And young.

(Admirably, Walsh does disclose that her own daughter works for Clinton.)

In an ode to Hillary, Walsh writes, Why I’m Supporting Hillary Clinton, With Joy and Without Apologies (italics in original):

But one moment got me particularly excited, and not in a good way. It came when a young white man—entitled, pleased with himself, barely shaving yet—broke the news to Clinton that his generation is with Bernie Sanders. “I just don’t see the same enthusiasm from younger people for you. In fact, I’ve heard from quite a few people my age that they think you’re dishonest. But I’d like to hear from you on why you feel the enthusiasm isn’t there.”

“I’d like to hear from you on why you feel the enthusiasm isn’t there.” I’m not sure I can unpack all the condescension in that question. I heard a disturbing echo of the infamous 2008 New Hampshire debate moment when a moderator asked Clinton: “What can you say to the voters of New Hampshire on this stage tonight, who see a resume and like it, but are hesitating on the likability issue?” Yes, the “likability” issue. I found myself thinking: Not again. Why the hell does she have to put up with this again?

My problem wasn’t merely with the insulting personal tone of the question. It was also the way the young man anointed himself the voice of his generation, and declared it the Sanders generation. Now, I know Bernie is leading among millennials by a lot right now in the polls. Nonetheless, millions of millennials, including millions of young women, are supporting Hillary Clinton. And my daughter, as Nation readers know, is one of them. I find it increasingly galling to see her and her friends erased in this debate.

The sexism line of attack was repeated in more of a broadside later on in her article:

I’m tired of seeing [Hillary] confronted by entitled men weighing in on her personal honesty and likability, treating the most admired woman in the world like a woman who’s applying to be his secretary. I’m stunned anew by the misogyny behind the attacks on her, and her female supporters, including my daughter. I’m sick of the way so many Sanders supporters, most of them men, feel absolutely no compunction to see things through female Clinton supporters’ eyes, or to worry they might have to court us down the road, take special care not to alienate us lest we sit the race out in November, if our candidate loses.

Keyword index to the template for defending Hillary:

None of those words were very surprising. What was surprising is that Walsh lashed out at the questioner’s youth:

So Hillary is getting clobbered with younger people, and the response is to dismiss their concerns and berate them for being young.

The only thing Walsh didn’t demand is that the guy GET OFF HILLARY’S LAWN!

I hope that kid does NOT have a pet of any kind.

You can convert a server into a microwave with just a few modifications, you know…

The young man was absolutely right!

What is the first word that comes to mind when you think of Hillary Clinton?

We can only pick one? This is going to be a difficult decision.

I go out of my way to avoid reading anything from Walsh or Salon. There is enough stupidity that can’t be avoided.

This is the first thing I’ve read of hers…..and most definitely the last!

Sorry, I’m going to go there. Is there doubt in anyone’s mind that if Walsh lived in ’30s Germany she would have been all-in for Hitler? There is no discernible intellectual honesty in these people.
At least the Germans had the excuse that their country had just lost a war, a large chunk of a generation of young men and had been impoverished since then.
But maybe the young, white man was a plant and Walsh’s article pre-written. Perhaps it is all part of the Plan.

“Young white men should not be heard… or seen”…. that she missed calling them would be rapists only meant it didn’t come to mind readily…. her bad.

Some things only a Carrington Event can solve when it comes to dealing with Progs.

I have to wonder at the purpose of this article.

If it is intended to support Hillary Clinton’s run for the presidency, it surely is not going to persuade any young people to vote for her. To do that, the article needs to show how Hillary has demonstrated both honesty and skill in dealing with her responsibilities as Senator and Secretary of State. This articles says nothing about her character or accomplishments.

This is the United States of America, and in this country, we get to haze our politicians. Joan Walsh’s failure to understand that fundamental point baffles me. After all, the young man was at least asking about the way the election was going, which puts him ahead of the Washington Post, a “news” organ that, for years, tended to focus on Hillary’s hairstyle.

The question asked by the young man was compound and adversarial, but certainly no worse than the questions routinely fielded by male politicians. Further, Hillary could have hit it out of the park, if she had credibly said something like “I understand their feeling of being let down. Our economy crashed eight years ago, unemployment stayed depressed for a number of years, and young people had an especially hard time finding and keeping jobs. Our policies mitigated the damage, although, of course, you never get credit for mitigating damage. But now, with our policies, we are getting ready to fly.”

The problem for the Democrats is, Hillary can’t give that answer with a straight face. No Democrat can. It’s the Republican candidates, most especially the former governors, who have put into place the economic policies that will help our kids.

Except “…our policies mitigated the damage…” would have been another fucking lie coming from the lips of that vile whore who has done nothing but lie her whole worthless life. Gawd I am way past ready for her and the rest of her one-branch-family-tree to retire from the public eye.

Agreed. The Democrats did NOT mitigate the damage: their economic policies prolonged and deepened the recession, while Republican states led the recovery.

Too many words. Too much rationalization. What she actually meant was “I’m tired of seeing [Hillary] confronted …”

That’s all. The rest is just noise.

Well, Hillary needs to swipe a clue from the GOP frontrunner and quit doing debates or town halls or anything having to do with suffering the indignity of facing anyone who doesn’t support her or may ask difficult questions. What becomes of our country if the peasantry is allowed to disrespect the royalty?

I don’t want to seem sexist so I’ll vote for someone else.

I hope that ‘sexist’ gets the same respect in the future that ‘racist’ has now. Both are tired, overused, as valuable only as a pitiful attempt to shut down criticism.

I thought that women wanted to be treated like men, like adults. I guess that their really fragile flowers who need to be kept in the kitchen barefoot and pregnant where they can be protected from unpleasant questions.

Anyone whining about being sexist when the voters questioned jon carry’s veracity?

I wasn’t aware that honesty was a gendered word or concept. Learn something new every day…

As we go full circle by indulging these malignant idiots, any criticism of the left will cause one to be accused of being a ‘leftist.’

Lesson: follow instructors Ted Cruz and Donald Trump, and do not in any way indulge malignant idiots.

Of course, this will be embraced by the likes of Wacko Bird scum John McCain and his fellow GOPe travelers. They don’t want to be called out for what they are, any more than Clinton does.