All about America and Freedom, versus all about Obama 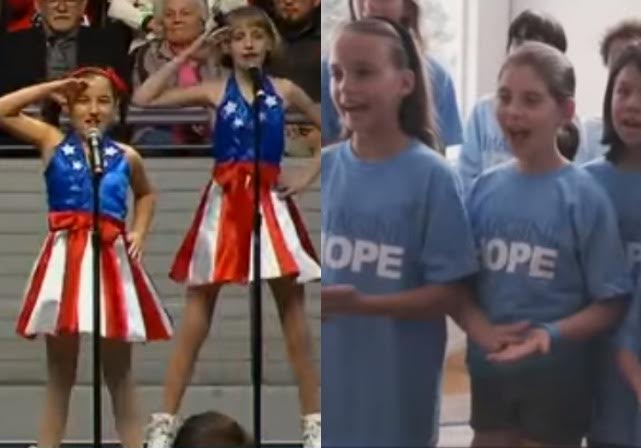 This video by USA Freedom Kids of their performance at a Trump rally in Pensacola, FL, is making the rounds.

Via the Free Beacon:

Now contrast that with the viral Obama children’s singing video from 2008:

So, the Trump team (or fans) took the George M. Cohan song, “Over There” and changed the words to fit Trump, added some red-white-and-blue costumed cheer-dancers, and people thing this is a problem?

That is NOTHING compared to the cult of personality, fawning, brainwashed-children singing an ORIGINAL song that a teacher at a school had her STUDENTS sing……learn, create art, and perform.

Then, their progressive tv/media savvy parents film it…..

Who could think these are in ANY way similar?!

Is there a problem with Trump’s little song, which is just a fun little show?

That is NOTHING compared to the cult of personality, fawning, brainwashed-children singing an ORIGINAL song that a teacher at a school had her STUDENTS sing……learn, create art, and perform.

That ORIGINAL song is a perfect example of the authoritarian, top-down ‘leadership’ which Obama perceives as proper to the presidency. I write it, you sing it. Those kids were conscripted.

Then I grant waivers as favors to those cronies who wish exemptions from the letter of the laws I signed – which I’m free to arbitrarily change after the signing if it helps my opinion polls.

Both of those videos creep me out. There is no reason whatsoever to be brainwashing children that young to sing stuff like that. They don’t understand politics. It’s propaganda pure and simple.

This hero-worship approach to politicians is disgusting and has no place in our rule-of-law-based system of government. Worshiping individual presidential candidates only feeds their egos and encourages them to rule by fiat.

I hear you but then I remember in 1960, when I was their age, and pulled my little red wagon all over the neighborhood, stuffed with AUH2O464 buttons and leaflets, and copies of A Choice, Not an Echo. That was for swing voters. I was nine, but it didn’t take long to realize I knew as much if not more about the issues than many of the adults — especially the Johnson/Humphrey ones.

The three girls in the first video were talented, enthusiastic, and did not appear in the slightest to be coerced or brainwashed. I don’t think they should vote, but see nothing wrong with them saying their piece in favor of our country, ’cause it’s obviously their country too.

Since 43% of Americans think like children, I don’t see any problem with appealing to that group.

“The official Facebook page for USA FREEDOM KIDS. We perform patriotic songs that will melt your heart, lift your spirits and inspire freedom. ”

Lefties are going bananas over the Trump video. Not enough lesbians, homosexuals, islamic refugees with ISIS banners, or boys with fake boobs. Might make terrorists, atheists, and illegal aliens feel unwelcome or micro-aggressed. Bernie Sanders wants to know if these girls have rape fantasies. Hillary Clinton wants to offer them abortions. Bill Clinton wants to — oh, never mind about that.

Worst of all, it sounds pro-American and patriotic! And doesn’t mention Obama even once.

Unlike the Obama Worship Chorale, the comments on YouTube have not been disabled. Click over to YouTube to see the left wing hatefest in full swing. Maybe leave an upvote over there for these proud, talented, and patriotic American girls — “Why we fight”.

A completely harmless and spirited bit of patriotic pageantry. I enjoyed it. Used to be totally common in America.

The perfesser can make a good point on occasion, as long as it doesn’t involve construing the Constitution.

Would Hillary have a video and if so who would be in it and what would be said?

I’m willing to bet that 95% of the American public cannot articulate the actual policy positions of the leading candidates.

We all know that adults are responsible for what the kids sing. The difference is in the lyrics.

The Obama lyrics are all about Waiting for Superman: Obama will do all this wonderful stuff. The ones about Trump are about what individual Americans do.

This is a bit apples-and-oranges: what Trump surely approved to buff up his image at a political rally, vs. what Obama fans composed to celebrate their hero.

When Trump fans talk about Trump, many of them sound eerily like the most ardent Obama fans:
* They declare Trump to be “the only one” who can save us, and our “last hope” for national recovery.
* They pop up in discussions of virtually any issue or problem and say, “This is why we desperately need Trump!”
* They ascribe to him a deep wisdom and all-knowingness on any topic, regardless of what (if anything) he has actually said about it.
* They excuse him for pronouncements and sins and inconsistencies they regard as disqualifying in any other candidate; indeed, they recast Trump sins as virtues.
* They get angry when anyone suggests that Trump should be vetted and critiqued like any other candidate.
* They refer to people who express reservations about Trump as “Trump-phobes” — as if not being 100% behind Trump, with unquestioning devotion, were some kind of mental illness.

A culture of winners versus a cult of losers.

Obama is the political equivalent of a boy band. No substance, rather a marketers projection of what they believe the audience wants to hear. His wax wings would have melted under 1/1,000,000,000 of the heat every GOP candidate has seen.

Hillary is the fulfillment of the Dem political trajectory and no one is going to buy tickets to see that act. Just like Pelosi would be toast outside of her district.

Obama, the Clintons and even Jimmy Carter were created to serve an audience that is not interested in substance nor accomplishments nor hard realities. In fact they try hard to ignore reality.

Contrast the boy band with the substance of Trump, Romney, McCain or anyone on the stage tonight and there is no comparison.

There are two Americas and they are getting further and further apart. The fact that Obama won a second term and was not shalacked like Jimmy Carter is frightening about the influence that one of those Americas has.

The USA Freedom Kids number reminds me of so many of the musical numbers in the many wonderful Hollywood films made during WWII. Unabashed patriotic songs and routines. Stirring and boundless morale builders. No wonder those folks are called the “Greatest Generation.”

The hopey-changey song reminds me of the Kumbaya pieces since the Vietnam war. Depressing, self-pitying, defeatist, and in the end, without achievement.

Another major point that you missed.

The kid performers for Trump are on stage at a Trump rally.

The Obama kid singers are a group of kids from a SCHOOL, led by a music teacher.

Right, of course – because Trump IS America and America IS
Trump, right?