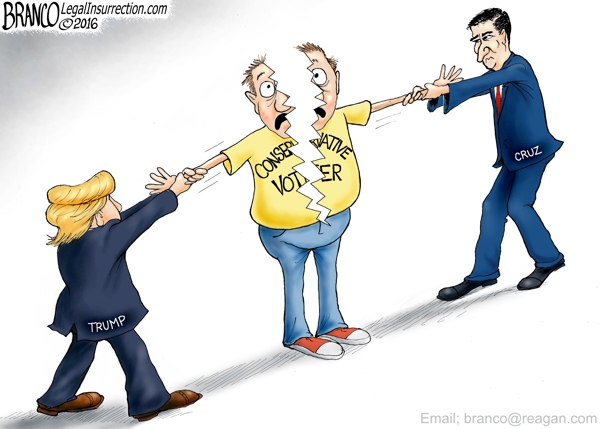 I don’t see any reason for conservative voters to be attracted to Trump at all. Now, Voters opposed to the GOP Establishment, sure. If your primary goal is to destroy the GOP establishment, I can see why Trump might have appeal. My primary goal is to have conservative policies enacted, which is why I’m rooting for Cruz. The fact that he will make some serious changes in the Establishment is merely icing on the cake, but he’s not the “Hulk Smash” Candidate like Trump is.

Yes, that summarizes it perfectly.
Trump is not conservative, but he is giving a voice to the common citizens who are mocked by elites for being too white, too old-fashioned, for showing up to work, paying taxes, trying to raise a family and so on.
If GOPe had lifted a finger to help and acknowledge these people, … well, that’s spilt milk.
Also, for all the base who got Repubs elected, only to see the GOPe give Obama anything he wants (such as the recent budget “deal”).
If the GOPe won’t do the job, “why not give Trump a chance”? This worked out horribly in CA, btw, with Ah-nold. You can’t blame the People though. You choose your leaders from the ones who step forward.
I really think this article is spot-on.
http://www.americanthinker.com/blog/2016/01/a_plea_to_conservative_voices.html

Voting for a born Canadian citizen is the last thing a true conservative would do.

You let us know when there’s a Canadian running on our planet.

You screwed up, Branco. You didn’t give Trump the bigger half.

Prepare for the onslaught.

Now I can see the left brain/right brain associations at work.

You didn’t depict all the dems jumping ship to Trump.

I’m a Cruz supporter, but dems are fleeing to Trump (not Cruz, they hate Cruz).

Also for conservatives, Trump is like drinking 1% milk when you crave whole milk. I’d drink it in a pinch and had no choice, but I’m not buying it at the store if I have a choice.

Could you ever have imagined that instead of Republicans weeping over illegal aliens “living in the shadows,” we’d see them assailing one another for having once supported amnesty?

It’s all Trump. Everything we’ve been begging politicians to talk about for the past decade, Donald Trump has brought up with a roar.

But the conservative Miss Grundys complain that Trump isn’t satisfactory. They say he’s “not a serious person”; he’s “a clown,” a “vulgarian”; he’s not a “constitutional conservative” — you know, like the people who ignore the Constitution on “natural born citizen.”

The nitpickers are like the cartoon of Diogenes looking over the man before him, and saying: “I was hoping for a taller honest man.”

You’re not getting a “taller honest man.” Trump is our only shot to save America, if there’s still time.

Only a TV reality show celebrity, self-financing brash billionaire, who is perfectly comfortable in front of a gaggle of microphones and loves to hit back, could do what Trump is doing.

Until Trump rose like a phoenix, Mitt Romney was the best we ever had on immigration. Close your eyes and try to imagine Romney saying the things Trump is about immigration. It quickly becomes apparent why no one else could wage this campaign and survive the attacks — except Trump.

After endless betrayals on immigration, including by half the current GOP field, I trust no one. But Trump is starting to convince me!

At the three-day Conservative Political Action Conference in March 2013 — about the same time the Republican National Committee was paying $10 million for a report instructing the GOP to “embrace and champion comprehensive immigration reform” — there were only two speakers who opposed amnesty: moi — and Trump. (And that was only because the organizers didn’t know what we were going to say, so they couldn’t stop us.)

Ted Cruz spoke at that CPAC. But not a word against amnesty.

In more than a dozen tweets that year — the very year that Marco Rubio nearly destroyed the nation with his amnesty bill, as the “conservative” media cheered him on — Trump repeatedly denounced the maniacal push for amnesty:

— “Amnesty is suicide for Republicans. Not one of those 12 million who broke our laws will vote Republican. Obama is laughing at @GOP.” (March 19, 2013)

— “Now AP is banning the term ‘illegal immigrants.’ What should we call them? ‘Americans’?! This country’s political press is amazing!” (April 3, 2013)

Two years later, Trump announced he was running for president in a speech about “Mexican rapists,” pledging to deport illegal aliens and build a wall.

That speech was the biggest one-address bombshell since Sen. Joe McCarthy waved the list of 57 (not 206) Communists at the Wheeling, West Virginia, Lincoln Day Dinner in 1950. McCarthy bought this country another half-century of survival, and that’s exactly what Trump is doing right now.

Can you remember a single speech from any of the other candidates? Quick: Within five, how many Republicans are still running for president?

Since that speech, I’ve felt like I’m dreaming. The networks are suddenly bristling with discussions of all the topics previously banned from television (unless I sneaked it in during a segment on ISIS). Manifestly, the voters are solidly with Trump. No wonder the networks never allowed immigration to be discussed.

Trump didn’t propose a “virtual” wall, something “better than” a wall, a “high-tech” wall or any of the usual deflections that mean: open borders. He said he’d build a wall. The more his Republican opponents claimed it couldn’t be done, the more details Trump gave about the wall’s precise specifications.

TRUMP: You mean it’s not politically correct and yet everybody uses it.

LLAMAS: Look it up in the dictionary, it’s offensive.

Now, everybody says “anchor baby.” It turns out that if Republicans don’t immediately go prostrate and apologize for failing to adhere to the Nation magazine’s stylebook, the word police don’t have a “Plan B.”

After San Bernardino, Trump proposed a temporary ban on Muslim immigration, and the media reacted as if he’d flown two planes into the World Trade Center. He didn’t budge. It turned out that no one who is not a sanctimonious douche was offended.

Trump keeps saying these things — and he’s not exactly getting kudos from the media. (Except on my webpage, where he’s a huge hit!) He’s never backed down. I’m beginning to think he believes what he says. Maybe it’s time to stop believing what the “conservative” media says.

The main reason to support Cruz is that when a Supreme Court or judicial vacancy opens up, you know we would get another Scalia or Thomas.

With Trump, anything is on the table. Trump has a long history of cosy relationships with the likes of the Clintons, Pelosi, Schumer, etc., and his current system is to seem above and apart from appearances of partisanship.

Whats going to happen when Trump has a SCOTUS seat up for nomination, and he needs to MAKE A DEAL to get one of his projects through? When you take into consideration Trumps ideological history, I cannot see him insisting on a Constitutional conservative. Heck, to put in a show of independence, I would EXPECT him to nominate Bill Clinton or someone like Elizabeth Warren. At best.

While he would be better than Bernie or Hillary in that regard, he would not be by very much. With Cruz, we know what we are getting.