Previous owner Donald Trump: “This would never have happened!” 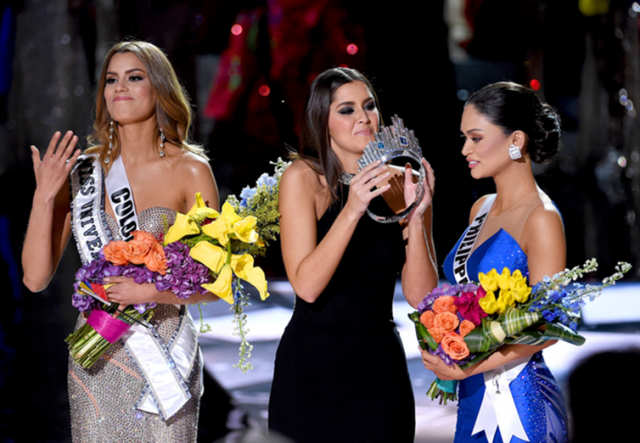 Presidential candidate Donald Trump once briefly owned the Miss Universe pageant, which he purchased after years of owning the Miss USA franchise and turning it around fiscally in his signature style.

He sold it as he began seriously pursing the GOP nomination, and the subsequent contest turned out to be historic…for the controversies.

In one of the most painful moments ever televised or shared via social media to an international audience, the host named the wrong contestant Miss Universe.

Miss Universe pageant host Steve Harvey announced the wrong winner at the end of Sunday night’s big show in Las Vegas and was forced to make an embarrassing apology.

But after Arevalo received the crown and a bouquet of flowers, Harvey announced he had made an error and that Wurzbach was in fact the winner.

A stunned Wurzbach, who had taken her place with the other contestants behind Arevalo, then walked out to center stage. Last year’s Miss Universe, Colombia’s Paulina Vega, then removed the crown from Avrevalo’s head and placed it on Wurtzbach.

Harvey apparently misread the card, because of the small print. Trump, practicing international diplomacy, suggested the women be named co-winners. He also noted the timing:

Very sad what happened last night at the Miss Universe Pageant. I sold it 6 months ago for a record price. This would never have happened!

But that wasn’t the only fall-out from this years pageant. Miss Puerto Rico was just suspended.

[Miss Puerto Rico 2015 Destiny] Velez was enraged by liberal filmmaker Michael Moore’s protests in front of Trump Tower in NYC last week, during which the Bowling for Columbine director held up signs that read: “We are all Muslim.” The beauty queen took to her Twitter page — which has since been deactivated — and spewed several incendiary thoughts.

“Muslims use our constitution to terrorize USA & plant gas stations,” the San Juan native, 20, tweeted in posts screen-capped by CNN. “All what Muslims have done is provided oil & terrorize this country & many others!!!!!! There’s NO comparison between Jews, Christians & Muslims. Jews nor Christians have terrorizing agendas in their sacred books.”

Miss Germany, Sarah-Lorraine Riek, threw some major shade at the new Miss Universe, claiming that none of her fellow contestants voted for Miss Philippines, Pia Wurtzbach, to win the competition.

“I really couldn’t believe it,” she said of Steve Harvey’s epic on-air mistake, when he accidentally announced first runner-up, Miss Colombia, Ariadna Gutierrez-Arevalo, as the winner. “I was so upset. For me, Miss France was the real winner.”

…”None of us voted for Philippines. I’m so sorry to say it,” Riek continued. “I wish her the best of luck with her year, but I’m really not happy with the results.”

Here’s to hoping we are happy with the results of the vote coming up in November 2016!

Maybe Steve Harvey acquired his reading skills from an inner-city school. Surely his gross oversight is not his fault. Somehow, it’s not. Can’t be. Getting hammered before the show had nothing to do with it.

Mistakes happen, but the lack of an equitable contingency plan is contemptible. The solution chosen by the Miss Universe staff to publicly shame one woman and deprive another woman was the worst possible resolution. Trump’s suggestion that management’s error should favor both women is the best possible outcome that avoids causing unnecessary harm to either contestant.