Who Dominated the Twittersphere in 2015?

Who Dominated the Twittersphere in 2015?

Hint: It was not Hillary Clinton

Earlier today, Vox posted this chart by Echelon Insights which breaks down Twitter’s most tweeted subjects of 2015. 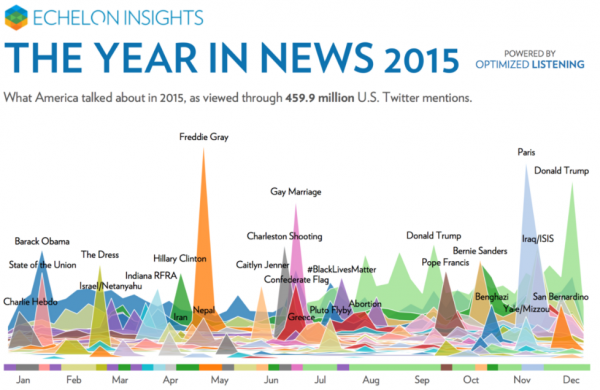 According to Echelon’s findings, Hillary Clinton received less attention than “the dress” and Bernie Sanders was barely more interesting than Pope Francis to Twitter’s some 460 million users.

Unsurprisingly, Donald Trump, avid Twitter provocateur dominated the Twitter conversation for the last half of the year. Trump’s penchant for using his Twitter account to lambast his enemies (and there are many) coupled with the disproportionate amount of media attention thrust Trump to the top of the list along with the terrorist attacks in Paris and the contentious Freddie Gray trial.

We explored the Trump/media relationship in September:

The Washington Post’s John Sides explored the correlation between media coverage of Trump and his ascension in the polls. The results are fascinating. There appears to be a direct connection to the amount of coverage Trump received and his poll standings.

Now, I’ll qualify this by saying that Trump has smartly harnessed the anti-Republican status quo dissatisfaction and used it to his advantage. That is a real phenomena that deserves credit. The rebellion against the old guard GOP certainly explains why those at the top of the Republican primary heap happen to be political outsiders. That being said, the media’s role in propelling him to the front of the pack is one that deserves serious consideration. 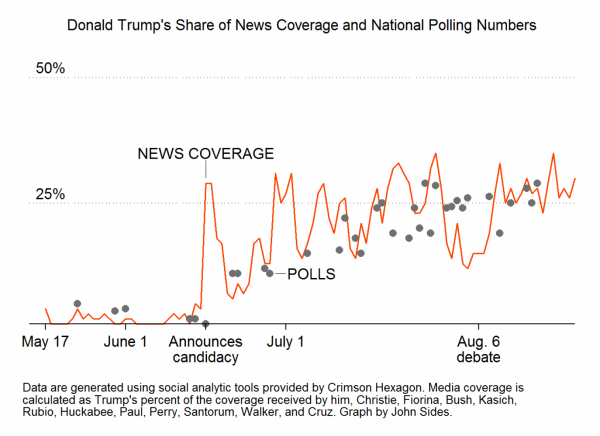 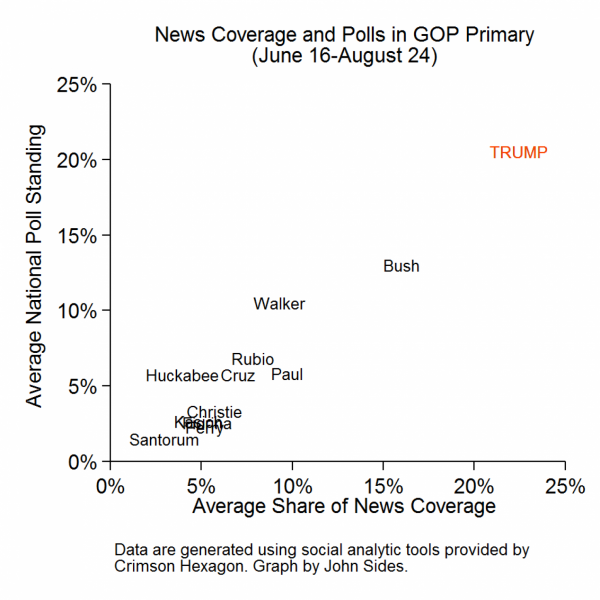 Trump’s campaign recently claimed they’re about to drop big bucks on television ad buys. If Echelon’s findings are accurate, that might be an unnecessary expenditure.

But, without gazzilions in Super Pacs, how’s anyone gonna win the nomination? Also, what does this analysis prove, anyway? Finally, how does this prove that Cruz is finally gonna win out over the much hated and highly feared Trump? Anyone, hello, anyone?

Lemme know when twitter traffic means jack-diddle. I mean in the real world.

Signs you are an idiot:

Star Wars and to a slightly lesser extent Jurrasic World were the most important things that happened this year.

Unsurprisingly, Donald Trump, avid Twitter provocateur dominated the Twitter conversation for the last half of the year.