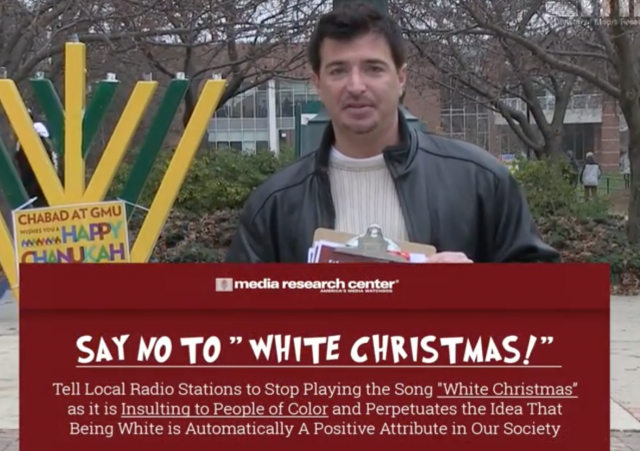 The good folks at MRCTV have a new college campus video out that is cringe-worthy to the max.

Dan Joseph, the MRCTV reporter behind the video writes:

Last week, I presented some college students with a petition urging radio stations to stop playing the holiday classic “White Christmas” because the song only focuses on “White” Christmases.

This clearly makes it racially insensitive, since it completely ignores Christmases of other colors.
Students were all too willing to check their privilege and take a stand against Bing Crosby’s racially charged micro-aggression. Just watch.

Not everyone Joseph encountered signed the petition, but within an hour he was able to procure eighteen signatures.

I think it’s time to launch a counter-movement: Stopping war on Irving Berlin.

This reminds me of a conversation I overheard at StarBucks. Two 20 something coeds were discussing the racism in Lion King. I found out that it was racists because the hyenas were speaking with Mexican accents. That the bad characters in the movie were largely black. I wanted to ask if it was pro-oriental as the King of the Jungle was yellow. Should have asked them about the racist song I’m Dreaming of a White Christmas!