If this was “about your First Amendment rights, would you still have the same opinion that we don’t need that any more either?” 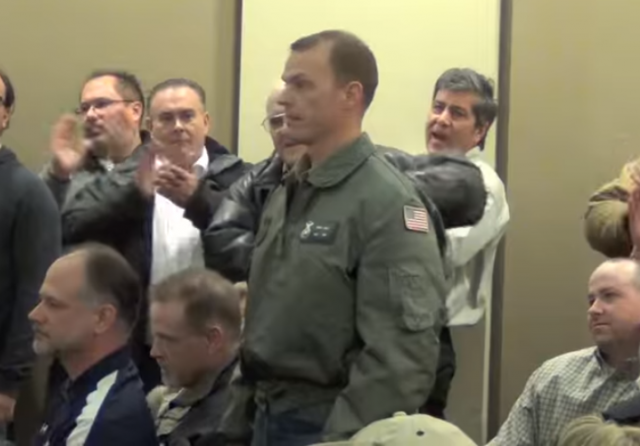 Anne posted this report and video back on January 22, 2013, Veteran stands up for 2nd Amendment at Chicago anti-gun forum.

In light of open calls by The NY Times and others to confiscate guns from law-abiding citizens, it seems worth running again.

The event was an anti-gun forum organized by the New Trier (Illinois) Democrats as a “space for real conversation.”

When panelist Lee Goodman of the Stop Concealed Carry Coalition responded to a question about the original reasons for including the Second Amendment in the Bill of Rights by saying “it didn’t matter [what their intentions were],” and that it no longer was needed, combat veteran Kevin Tully spoke up:

Here is the key exchange:

Veteran: Sir, sir. While you’re standing up. I’ve sat here [inaudible] and I’d like to agree with the professor. Everyone standing in this room right now, especially the veterans in the room right now, know, that we are all Americans. The problem with this country right now is it’s us and it’s f***ing them. We need to stop this crap.

Now, the thing I would like you to answer, sir. And I did go to war for this country. Whether it was for everyone in here’s ability to have oil and gas in their cars, or the banks, or whatever. I went to war for my country.

And I went to war for your ability to have the First Amendment, to say what you stood up there and said today, to write what you want to write in your newspaper, and have whatever opinion you want to have. You can practice whatever religious freedoms you want. I would like you to answer the question, since you just said that one of the rights that I went to war over to defend, that is inalienable, to every American citizen. If this discussion was going on, about your First Amendment rights, would you still have the same opinion that we don’t need that any more either.

Goodman: You didn’t hear my answer….that’s not what I said…I said it doesn’t matter what their reasons are, what matters is whether or not it’s relevant today.

Goodman: When they consider any part of the Constitution, any law, they’re going to say, “what does it mean today?”

The gun grabbers try all manner of trickery to enact their dreadful plans of confiscation, but they refuse to tackle what they know to be their biggest obstacle. The 2d Amendment itself.

If they’re so sure (I could have said cocksure) of their position then lets see them go through the long slog of enacting an amendment to repeal the 2d Amendment. The route followed by all of the document’s amendments has been via Congress. Congress proposes (w/a two-thirds vote) an amendment, then sends it out to the states for a 75% approval. [There is another means of amending the document, as yet unused, whereby two-thirds of the states force Congress to call a convention for amending. As many know, there are serious movements afoot for using this method.]

So the gun grabbers must get Congress to move on proposing a 2d Amendment repeal. But to do that, the gun grabbers, who essentially are Democrats, have to secure Congress, both houses, then get two-thirds of those respective members to agree.

They know that ain’t gonna happen. So they’re reduced to their trickery.

The problem is that the left in this country, by and large, *doesn’t* believe in the first amendment anymore.

Or at least there are a lot of exceptions — like movies critical of Hillary Clinton, speech that offends minorities, “denial” of Global Warming… and the list goes on.

Obama had a perfect way to obtain gun control without eliminating the second amendment. If only Congress would have passed the legislation to forbid those on the no-fly list from possessing guns – the list that is controlled by an unseen, unchallengable bureaucracy – his regressive left regime could just add every conservative and he could start disarming all of his enemies.

…his regressive left regime could just add every conservative and he could start disarming all of his enemies.

…he could try to disarm all of his enemies. I’m thinking his ‘enemies’ wouldn’t feel inclined to cooperate.

You are so wrong it’s not funny. Farook was born here and was not on any no fly list. Get over it. There is no answer to unprovoked murder whether it is religious or political it is going to happen. Arm yourself or cower but don’t tell the rest of us what to do!

Nothing prevented the AG from adding him to the No Fly list. Plenty of people born here are on it.

I believe that Teddy Kennedy was on the no-fly list for a while.

IMHO, Teddy Kennedy should have been on the “No-Drive” list.
(Mary Jo Kopechne was not available for comment.)

“The No Fly list only survives because there’s no constitutional right to board a plane.”

…the Supreme Court ruled that it can’t require anyone to buy health insurance. What was your point again?

Where have you been?! Chief Justice Roberts REWROTE the ACA to FORCE us to buy health insurance (aka the “individual mandate”)!!

You do know that both of those things have been forced on us right!? Are yu ok? bump your head or sumtin??

Recall history that during the Civil War, President Lincoln suspended the right of Habeas Corpus, at least in the combative regions of the country.

President Obama, IMHO, will go far beyond that given the right circumstances, perhaps even given any excuse at hand. The so-called spate of killing, that in Colorado recently, the San Bernardino terrorist killings, and whatever else he can conjure up to proclaim that since the US is in a state of civil unrest …; well, you all can imagine the rest.

I’ve felt for some time that Obama is looking for the slightest excuse issue such an executive order but I’m also hoping I’m terribly wrong about this and that I wind up with severe egg on my face. If nothing else, Obama does not believe in a democratic state of being and certainly not in the Constitution, as it restricts his actions.

Quite frankly, IMHO, Obama is willing to do whatever it takes to accomplish his goal of radically transforming this country into his concept of a browbeaten former city of light.

Habeus corpus is the only right the government has the authority to suspend (without due judicial process), and only under very specific circumstances (in times of war or civil insurrection AND when the public safety demands it). Habeus corpus is a civil right, meaning it derives from the nature of government and society, unlike natural rights, which attach to persons by right of birth as human beings. Government is authorized to suspend any right by the use of due judicial process (aka “due process of law), but that can only be initiated against an individual by charging that person with a crime. And then the decision to strip a defendant of his rights (or at least some of them) is made by his peers. The government merely provides the venue for the process and the force for the execution of the jury’s (citizens’) decision.

Removing or infringing upon a person’s rights by legislative fiat is a violation of the “due process” clause and an infringement upon the authority of the people and the judiciary by the legislature.

DGO: You’re correct as to Habeus corpus. However, the meaning of my comment is that our President Obama behaves as though there were no limits to his executive orders. Given a chance, based on minimal evidence, IMHO, Obama would leap into that fray and use his perception of his powers, and especially of current events, to declare martial law throughout the land.

Understand that Obama is in fact a demigod wannabe, determined to do what he can to further diminish this country.

Ok, you’re more trusting that Obama will not greatly exceed his Constitutional powers and I’m not. So be it.

Habeas is different. The constitution specifically allows Habeas to be suspended in war zones; the only unclear detail is whether this is to be done by the president or by the congress.

Don’t give them any ideas. Millennials don’t really believe in free speech already. Use religion instead. They’re already paranoid about “xtians” and “fundies.”

It will always be necessary to speak truth to those who want to assume power over you by diminishing the Constitution and your ability to defend yourself physically or verbally.

Tyranny (today’s Progressivism) dehumanizes the ‘other’.

This discussion is even more relevant today as BO speaks tonight no doubt on gun control and what HE will do as POTUS.

The lofty Professor also is heard to pronounce ‘relevant’ as Revelant. A little knowledge is a bad thing, and undermines his assumed status as a knowitall.

People forget that POTUS’ executive orders are about as lawful as your boss’s memo that no two employees can go to the water cooler at once during business hours.

The dude is an “executive”, in the “executive branch” of our gov’t. He has the power to require Slimline Staplers or inter-agency dress codes.

No one has to abide b anything he says. Even his powers as C-in-C are limited to 90 days pending Congressional ruling.

If he ordered a gun confiscation, just who exactly is going to physically carry out his office memo? Your brother the cop? My brother in the Army? Your neighbors sister in the FBI?

There are 120 MILLION gun owners with 350 MILLION guns: a larger armed force than every.other.army.combined.

And THAT is why globalist power-brokers want America disarmed- because even w/o our military we are the largest armed group in the world by far.

And Barry Choom is gonna write *a note* and stop that?

Small survey, what are the reasons for people reading this to refuse to get rid of the 2d amendment?

Basically, the 2nd Amendment is an enumerated right as defined in our Bill of Rights, and as important to many Americans as the 1st Amendment.

However, you answer first what you’re trying to determine? Do so!