Whether in Haifa or Austin, BDS is anti-peace. 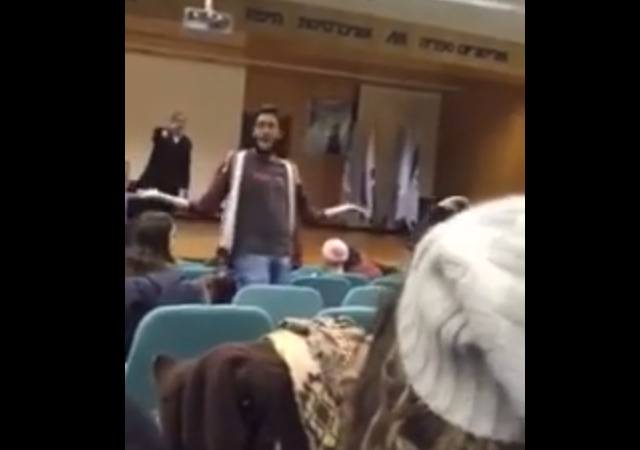 We have carried many stories over the years about anti-Israel activists in Europe and the U.S. using the heckler’s veto to shut down speeches and events.

A recent example was at the University of Texas at Austin, when members of the Palestine Solidarity Committee disrupted an Israel Studies event, then claimed their own speech was suppressed because their protest was not allowed to continue. The UT-Austin students disrupting the event were campus leaders of the Boycott, Divestment and Sanctions (BDS) movement.

Now another example from the University of Haifa, Israel, in which radical Arab students disrupted a speech by a visiting Egyptian scholar who is affiliated with Yale University.

Ynet News has the story:

World-renowned Egyptian religion researcher Dr. Omer Salem of Yale University was interrupted during a lecture to psychology students at Haifa University earlier this week by two Israeli Arab students accusing him of “collaborating with Zionists.”

Dr. Salem also runs an international peace organization, an interfaith initiative started by Muslims, Jews, and Christian in Palo Alto, California. It focuses on improving relations between religious groups in the Middle East generally, and in Israel specifically.

Salem came to talk to students about the relationship between Arabs and Jews, as well as what the Koran has to say about this relationship. Two Arab students from the Arab party Balad’s university group did not like what he had to say. “The blood of martyrs is spilled and in the end you get a middle finger,” one student shouted while gesturing with his finger at Salem.

Here is the video that is circulating of the event:

The Jewish Press has some of the translation:

The Egyptian researcher spoke to psychology students at Haifa University on co-existence. One Arab student shouted, “You are dancing on the blood of martyrs.”

Arab students at the University of Haifa face a disciplinary hearing for calling a world-renowned Egyptian religious researcher a “Zionist collaborator.”

One heckler yelled, “Talk to the Dawabsheh family about coexistence,” referring to the arson-murder of Arab parents and their baby three months ago in a Palestinian Authority village.

Arab students, including from the anti-Zionist Balad party and who are known to the University for their Radical Views, shouted:

The blood of martyrs is spilled and in the end you get a middle finger. They should stop the colonization in Palestine, they are silencing us.

You should be ashamed of yourself, the Zionists are protecting you. You came here to support colonization. You are dancing on the blood of martyrs.

Why do you come here? You have no respect. Go fix the situation in Egypt.

The University is investigating and may bring disciplinary charges against the students.

But you know who’s a fan of the disruption?

Mohammed Nabulsi, the UT-Austin law student who led the disruption of the Israel Studies event. 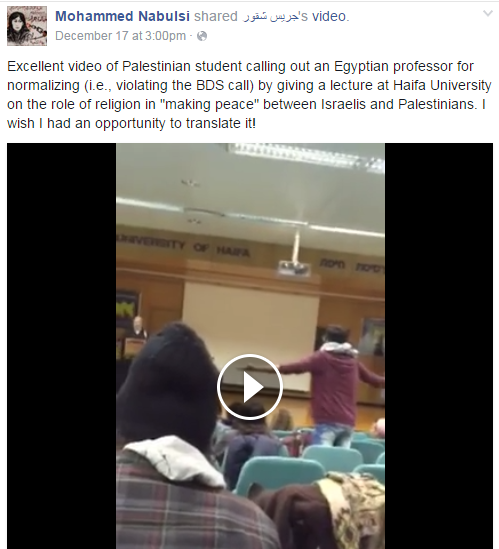 You see, “anti-normalization” is a key feature of the BDS movement, a subject we’ve explored before. BDS is for violence and continued conflict, and doesn’t want Israelis and Arabs to get along.

Whether in Haifa or Austin, BDS is anti-peace.

“Normalization”? What is that, Wm?

Here these Arabs are at Haifa U. A uni built by Jews. In Israel. The land of the Jews. And they are freely venting their hatred and racism. Nobody threw stones and rocks at them. Nobody kicked at and beat them.

The only people calling for “coexistence” are those who believe it is possible to coexist with genocidal maniacs. The maniacs themselves are standing in the halls built by those they would kill and lauding deceased killers. That kind of moxie comes from the ideology that says they are superior to everyone else.