Tibor Rubin has died – If you don’t know who he was, you need to

Tibor Rubin has died – If you don’t know who he was, you need to 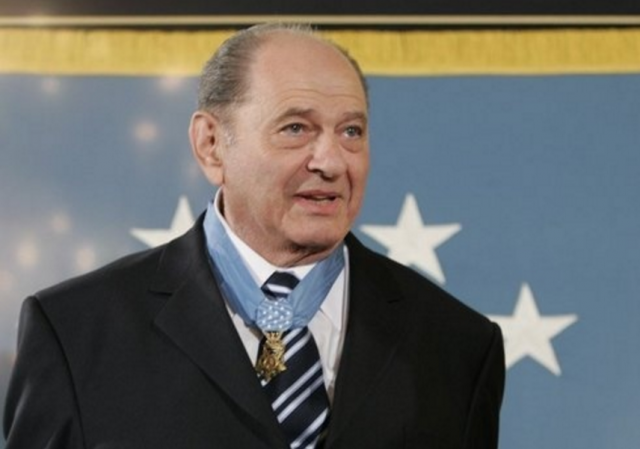 Tibor Rubin passed away a few days ago at age 86.

I didn’t recognize the name when I saw some articles about his passing. Now I’m glad I’ve done some research.

Tibor Rubin was awarded the Congressional Medal of Honor by President George W. Bush in 2005. That would have been remarkable in itself, since the award is so rarely given.

Just minutes after Tibor Rubin received his medal of honor at a White House ceremony Friday, he announced he still wanted to do more for his country.

“I’m working on my second Medal of Honor,” the Korean War veteran said, smiling proudly. “This country has done so much for me. I never figured this was going to happen. I’m just as happy as I can be.” ….

Rubin, 76, was born in Hungary and sent to the Nazi concentration camp in Mauthausen, Austria, as a boy. His parents and a sister were killed during their imprisonment, but Rubin survived for 14 months and was freed when American soldiers stormed the camp.

He swore to pay back the country for that freedom, and eventually emigrated to America and joined the Army. He was sent to North Korea in 1950 with the 8th Cavalry Regiment and distinguished himself for bravery in battle during several firefights around Pusan.

In once instance, Army officials said, he took hold of his unit’s only remaining weapon — a machine gun whose previous three gunners had been shot — and held off an advancing force long enough for his troops to retreat.

But that wasn’t all. When captured by the Chinese, they offered to repatriate him to Hungary. He chose to stay with his comrades:

“My English at the time wasn’t so good, but I told them I’d have to go (with the POWs),” he said. “I wouldn’t want to leave without them, because I had my brothers there.”

While imprisoned by the Chinese, Rubin snuck out of his barracks at night to get food for weaker prisoners, and acted as something of a prison doctor, saving more lives.

Rubin’s Medal of Honor Citation reads (hard breaks added by me for ease of reading):

For conspicuous gallantry and intrepidity at the risk of his life above and beyond the call of duty:

Corporal Tibor Rubin distinguished himself by extraordinary heroism during the period from July 23, 1950, to April 20, 1953, while serving as a rifleman with Company I, 8th Cavalry Regiment, 1st Cavalry Division in the Republic of Korea.

While his unit was retreating to the Pusan Perimeter, Corporal Rubin was assigned to stay behind to keep open the vital Taegu-Pusan Road link used by his withdrawing unit. During the ensuing battle, overwhelming numbers of North Korean troops assaulted a hill defended solely by Corporal Rubin. He inflicted a staggering number of casualties on the attacking force during his personal 24-hour battle, single-handedly slowing the enemy advance and allowing the 8th Cavalry Regiment to complete its withdrawal successfully.

Following the breakout from the Pusan Perimeter, the 8 th Cavalry Regiment proceeded northward and advanced into North Korea. During the advance, he helped capture several hundred North Korean soldiers. On October 30, 1950, Chinese forces attacked his unit at Unsan, North Korea, during a massive nighttime assault.

That night and throughout the next day, he manned a .30 caliber machine gun at the south end of the unit’s line after three previous gunners became casualties. He continued to man his machine gun until his ammunition was exhausted. His determined stand slowed the pace of the enemy advance in his sector, permitting the remnants of his unit to retreat southward. As the battle raged, Corporal Rubin was severely wounded and captured by the Chinese.

Choosing to remain in the prison camp despite offers from the Chinese to return him to his native Hungary, Corporal Rubin disregarded his own personal safety and immediately began sneaking out of the camp at night in search of food for his comrades. Breaking into enemy food storehouses and gardens, he risked certain torture or death if caught. Corporal Rubin provided not only food to the starving Soldiers, but also desperately needed medical care and moral support for the sick and wounded of the POW camp.

His brave, selfless efforts were directly attributed to saving the lives of as many as forty of his fellow prisoners. Corporal Rubin’s gallant actions in close contact with the enemy and unyielding courage and bravery while a prisoner of war are in the highest traditions of military service and reflect great credit upon himself and the United States Army.

It was a story that should have earned him the Medal of Honor when liberated at the end of the war. But it wasn’t to be, because anti-Semitic officers buried the account of his heroics.

In writing of his death, the NY Times noted:

Chillingly, Corporal Rubin had an enemy on his own side. Numerous reports detail affidavits submitted by his fellow soldiers who described their sergeant as a virulent anti-Semite who repeatedly assigned him the most dangerous missions, including one in which he single-handedly held off a wave of North Korean soldiers for 24 hours, securing for his own troops a safe route of retreat.

The affidavits also suggested that though Corporal Rubin was recommended more than once for the Medal of Honor, the same sergeant, Artice V. Watson, deliberately ignored the orders from his own superiors to prepare the appropriate paperwork.

In 2002, after Congress passed the Leonard Kravitz Jewish War Veterans Act — named for a Jewish soldier killed in an act of heroism in 1951 and subsequently denied the Medal of Honor — President Bush ordered a review of the records of 137 Jewish veterans. Corporal Rubin’s case was deemed among the most egregious.

But he wasn’t bitter, as he explained in the Stars and Stripes 2005 article: 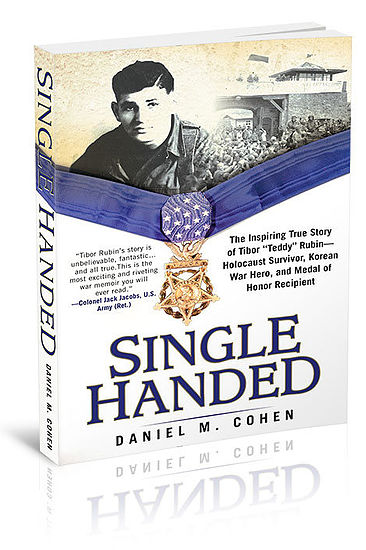 What an inspiring post. Thank you for sharing it.

Medal of Honor receipient NOT winner…please. And God bless.

Very beautiful article, thank you so much .

Indeed, Mr. Rubin was far wealthier and braver than George Soros will ever be.

Thank you for the article and video link.

Mr. Rubin was precious gift to our nation and the world.

Thank you for presenting his story, Professor Jacobson.

Thank you for this, Professor.

Rubin was fortunate to receive the medal when he did (from George Bush), forgoing the nausea of having Obama present it.

RIP, sir. My prayers and condolences to your families and friends. Your buddies are waiting with drinks, on Fiddler’s Green. {SALUTING}

Corporal Rubin was a hero in several ways. He will be very welcome in heaven.

I love this story. Thank you.
Sometimes when i read this, I wonder what I would have done in the same situation.

As it seems so many Medal of Honor recipients whose comments I’ve read show, to a soldier their nobility is only surpassed by their humility. Thank you Corporal Rubin for your honor and sacrifice so we may live in freedom…hopefully we may preserve it.

Just yesterday I was telling someone about Tibor Rubin in the context of Yad Vashem honoring Sgt. Roddie Edmonds. Edmonds saved hundreds of fellow POWs by refusing a German order to have the Jewish POWs fall out. Instead he ordered all 1,000 prisoners under his command (he was the highest ranking NCO there) to fall out, telling the Nazis, “We’re all Jews”.

Edmonds has been put in for a Medal of Honor. The military tends to honor those soldiers who act gallantly when prisoners, particularly those who save other prisoners’ lives.

I’m sure that Edmonds, who passed away in 1985, was part of the greeting committee for Rubin in Olam HaBa.