“the administration’s tolerance for intolerant activism takes place every day” 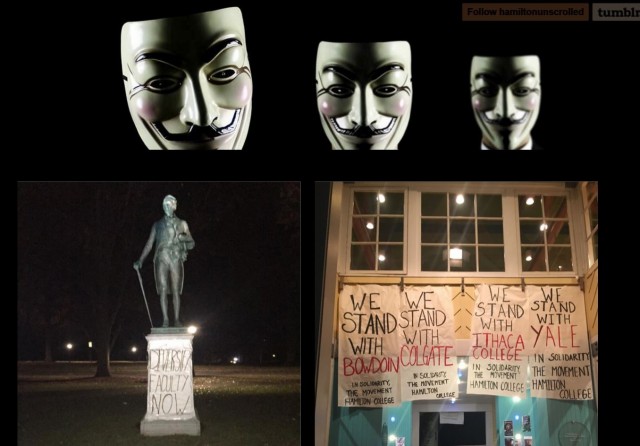 Last week, the group of Hamilton College activists known as “the Movement” released a lengthy list of demands to almost universal ridicule.

“Fwd: Demands,” read the subject line of the email President Joan Hinde Stewart sent out to the campus, though she referred us benignly to the “attached message” the young scholars of the Movement had so humbly submitted for her consideration. “Certainly,” she wrote, “we always want to do better as a community and encourage discussion.”

She could start by learning what a discussion is, because it sure doesn’t involve “demands.”

For two years, the Movement has advocated for censorship and shouted down students who disagreed with their dogma. Not a single administrator has ever spoken out against them. Nor, for that matter, have many professors. Little wonder it escalated to the point where the wider world took notice and realized just what kind of intellectual atmosphere Hamilton administrators are creating.

It’s a shame to say it, but the college deserved the ridicule and embarrassment it received at the hands of national media.

Sure, only a small percentage of students agree with the Movement’s demands. Sure, we don’t want our school to be represented by such a disproportionately shrill cohort. But we should ask ourselves how we allowed a screaming group of petty totalitarians become the public face of our college.

Who spoke up publicly when protesters teamed up to block local traffic last year? Which administrator commented on the crude and unbecoming ways in which the activists conducted themselves? Did Dean of Students Nancy Thompson say a single word as she stood by on November 18th while protesters shouted obscenities through a megaphone in front of Buttrick Hall? No.

Our administrators aren’t leaders. They’re bureaucrats. They exist to protect the college brand, and if that means they have to sweep political issues under the rug, they’re more than happy to do it. Above all, they’re afraid of being called racist.

As a result, they’ve engaged in a wildly irresponsible whitewashing of the campus political culture. The most recent example is the hastily published college news story, “Hamilton Student Group Joins National Conversation,” which might be the understatement of the year.

Many are only noticing it now, but the administration’s tolerance for intolerant activism takes place every day. Every day that administrators and professors refused to acknowledge problems with the political scene, they let the problems grow. The only time an administrator came close to publicly acknowledging it was in Dean Thompson’s limp free speech email of February 19. “More speech, not less,” she concluded, after several qualifiers.

More is not always better, as the latest tome of demands shows.

Hamilton administrators could promote a culture of higher-level discussion in our campus’s print publications, but they don’t. The administration has co-opted The Spectator, which, apologies to my friends there, hasn’t been printing the hard-hitting criticisms of the college that it used to. The stellar opinion pieces and editorials in the last issue demonstrate a change. They demonstrate that our students, much more so than our administrators, are interested in leading the way to a better climate for discussion.

Hamilton administrators could do any number of things to send the message that the Movement’s way of addressing issues is unproductive and disrespectful.

Their silence is damning.

The Daily Beast asked Hamilton’s Vice President of Communication Mike Debraggio if President Stewart “had any concerns about the nature of the demands, including the restriction of free speech and the discouragement of white faculty from holding certain leadership roles.” Debraggio “simply responded that Stewart did not.”

No concerns at all? Really? The sheer illiteracy of the demands should stun any administrator who claims to run a school for writing.

I have many reasons to be grateful to Hamilton College, starting with its generous financial aid. But I am not proud to be a Hamilton student right now, and I have little gratitude towards administrators who privilege the blunt force of activism over reasoned discussion.

Where are the leaders?

Michael Adamo is a senior history major at Hamilton College. He is currently editor of the Alexander Hamilton Institute’s student publication Enquiry, where this post originally was published.

And whenever an administration is served with “demands”, they should simply respond, “Screw that”.

Oh, but that our administrators had the will to take a red pencil and correct the submitted paper before returning it with the grade it so richly deserves and a little encouraging note stating that if the discovered deficiencies are corrected and turned back in by the end of the semester, they will still be worth 50% of the original grade.

I had a boot camp BMC who had a great line — “this sh*t’s gonna come to a screeching halt.” We need a college president to say this. Can you imagine the wonderful shock on the faces of these dementedly entitled brats if they were to hear this?

“No to all your demands. Back to classes or face suspension.”

I can’t remember which one it was but one collage basically did that, “Either return to class or start facing the consequences.” The protest ended the next day, lol.

Fail them all and boot them off the campus. The ones that have scholarships, revoke them too.

The ‘movement.’ More like a bowel movement. Put diapers back on these children.

Like the old adage, children should be seen, not heard. Speaking of Obama…