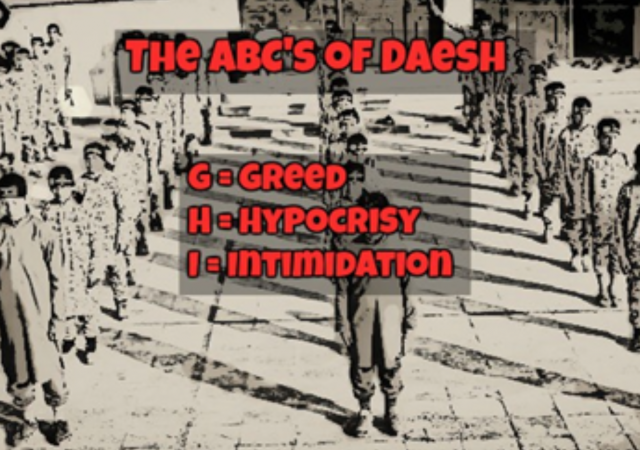 Daesh (ISIS or ISIL) has a formidable online presence which they use to spread propaganda, recruit new jihadis, and collect information.

Called “Think Again Turn Away” (yeah, we have no clue how they came up with that either) the State Department launched its own overt-education initiative to combat ISIS on social media as part of an Integrated Strategic Counterterrorism Communications Initiative created by Executive Order in 2011. Coming from the same people who think an influx of jobs would deter jihadis from strapping bombs to their chests, the results are about what you’d expect.

According to the Washington Post, “review by outside experts cast new doubt on the U.S. government’s ability to serve as a credible voice against the terrorist group’s propaganda, current and former U.S. officials said.”

You mean to tell me The ABCs of Daesh is not an effective way to combat radical Islamic terrorism? GTFOH.

The review group, which included veterans of Google, Twitter and other technology companies, endorsed State Department initiatives to enlist Middle Eastern allies in the propaganda war as well as a campaign that called attention to often-harrowing accounts from Islamic State defectors.

But the team “had serious questions about whether the U.S. government should be involved in overt messaging at all,” said a U.S. official briefed on the group’s findings. The group’s skepticism reflected concern about U.S. credibility with Muslim audiences overseas as well as the scant evidence that the State program has diminished the flow of recruits to the Islamic State, also known as ISIS and ISIL.

…The U.S. counter-messaging operation “is in disarray,” said Will McCants, an expert on the Islamic State at the Brookings Institution and a former adviser to the State Department. Among those involved in messaging efforts, McCants said, “morale is low, and they’re not getting any clarity from the top about what they’re supposed to be doing.”

State Department officials acknowledged that aspects of the program’s strategy are again being reevaluated, and that the number of positions devoted to producing content and posting items on Twitter and other platforms could be scaled back. But officials cited what they described as major progress on other fronts over the past year, including the addition of foreign partners to an expanding network of messaging centers overseas.

Messaging and propaganda is typically basic content; designed to be meaningful to those without much education. Given that Think Again Turn Away is an English language outlet, it’s hard to determine their target demographic.

Pro-American messaging has long been a crucial component to our eventual success in both military and ideological conflict. Such messaging played a vital role in dismantling the War on Terror in its early stages, particularly in regions like Southeast Asia. Salafist groups like Jemaah Islamiyah were curbed (at least for at time) largely because regional attitudes towards the United States trended positive while those towards Salafist hardliners grew increasingly negative. However, messaging was only one prong of a comprehensive plan to destroy radical Islamic terrorist cells globally, not an oft-cited success (see also: The “we’re fighting ISIS online!” mantra).

Fast forward 10+ years, and this is the Obama administration’s idea of effective anti-ISIS propaganda:

Of course nothing the government does is free to the tax-payer, so how much are we paying for The ABCs of Daesh? $5 million annually.

Is a $5 million taxpayer-subsidized Twitter account with no way to measure success a good investment for U.S. taxpayers? It is reasonable for American taxpayers, who fund this expensive social media project, to expect there to be metrics on what the mission is, how to define success, and who the target audience is. It is not unreasonable for State to tweet the facts about global terrorism or to work to get the truth out about the murderous thugs of ISIL. There are millions of reasons to “turn away” from terrorism, but should it really cost millions of dollars to tweet about them?

ABCs, climate change, jobs, gutting the first and second amendments — this is how the Obama administration chooses to respond to radical Islamic terrorism. It’s a wonder we’ve lasted this long.

It would help to have a President and his political appointees who actually loves this country. Without that, there is no way the propaganda people can come up with an effective product that satisfies the administration.

Will the Sesame St. version of anti-terrorism work as well as Obamacare and the Life of Julia?

I think it’s working EXACTLY as well as the Life of Julia and Obamacare “Get your Health Insurance” sales pitches: Just about no effect, one way or the other.

What if bitter clingers had more jobs? Naw. Bammy’s shovel’s only full of one item.

As a former firearms instructor I have been contacted by several acquaintances in the days following the attack in San Bernardino. These are friends who do not own guns, but are now seriously considering a purchase because of fear that the government is unable / unwilling or will not be available in time, to help in a crisis. I offer recommendations on the guns that I think would be useful to them based on a number of different factors that I can identify during our conversations.

In every conversation I have had, Muslim Terrorists have been mentioned. I have been asked whats wrong with “them”, the Muslims. I have been forwarding the link below to my friends so that they may “Know Thy Enemy”. Perhaps the Department of State should be alerted to this article.

The problem with “Think Again Turn Away” is that the people at whom this is aimed at, know about and accept most of the atrocities. Maybe there are some they won’t like, and you could point out what they are doing to some women – trying to make them marry soldiers who wll die over and pver again and advising against chidren – but the whole point is they think it is justified.

Maybe something could be too gruesome.

Better would be something estimating the probability of death, the possibility of getting arrested and beaten or worse, the fact that “martyrdom” might be against another group that was not only Islamic, but jihadist (al Nusra) and arguments maybe.

You could say that something that wants only death, for its enemies – the enemies it makes, which are many – neutrals and it’s own members, can’t be good.

The problem, again, with “Think Again Turn Away” is that this approach assumes the targeted audience shares what should be maybe universal values, but the whole point is that they don’t, or they wouldn’t be wanting to join them!!

It’s not news to them that ISIS kills people. You’ve got to tell them what they don’t know. That life will be boring, that they won’t be trusted, and then they will be asked to volunteer for certain death, and it won’t be easy to leave if they change their minds.

There’s no point in having this counterpropaganda inaittive directed from the top. Nobody at the top knows what they are doing or has any idea what to say.

Better would be to let whoever is in charge do whatever they think is best (provided they don’t endorse lies that many would-be jihadists might believe, and don’t endorse any kind of evil.)

And let whoever seems to be having the most success, as well as that can be determined, be given greater authority.

Given that Think Again Turn Away is an English language outlet, it’s hard to determine their target demographic.

Young Moslems in England considering going to Syria and joining ISIS, of course.

The State Dept. – and the DOJ and the whole regime – appear to be a total clown show, and the rest of the world has to be laughing hysterically at us. But this could be the worst domestic menace we have faced since our founding: the deliberate obfuscation by and treachery of our own government.

Our own Gov. won’t protect us. The Pres. is on the other team. We have never been faced with a situation like this before. It is becoming harder to hide, whom is against us. We must have a strong American, who loves this country. This hiding the Real facts from the public, must stop.