Remembering the 14 Victims of the San Bernardino Terror Attack

Remembering the 14 Victims of the San Bernardino Terror Attack 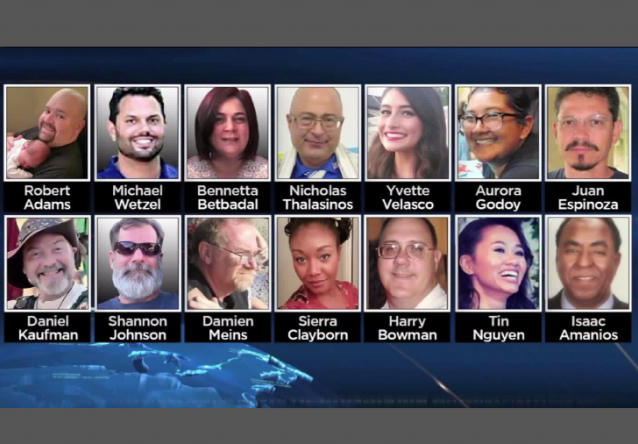 As San Bernardino families mourned the loss of their loved ones during a terror attack, funeral services were being conducted for an American student killed during the recent Paris massacre:

Gonzalez, of El Monte, died while eating with friends at a popular bistro in Paris called La Belle Equipe. A senior majoring in industrial design, she was one of 17 CSULB students attending Strate College of Design in Paris as part of a semester abroad program.

She died in the coordinated attacks that erupted at the cafe, a soccer stadium and, most notably, at the Bataclan theater where a Palm Desert-based band was performing.

The loss of such a young woman, filled with talent and life, is horrific. So, too, is the loss of the 14 Californians at the hands of a couple they had befriended.

They were a young father of six and the cousin of an NFL player, a passionate defender of Israel who enjoyed debates and a community worker who dressed up as Santa Claus, some 14 victims in all, representing a tapestry of the multicultural American family, all gathered for what seemed the safest of occasions: a holiday party.

The San Bernardino, Calif. Sheriff’s Department late Thursday released the names of those who died Wednesday night when a heavily armed man and woman burst into the room where they were enjoying a county health department banquet and opened fire. The male gunman, Syed Farook, presumably knew at least some of those he mowed down since he worked for the same department. The New York Post even reported that colleagues there had thrown him a baby shower earlier this year.

The victims ranged in age from 26-60 and included eight men and six women…. 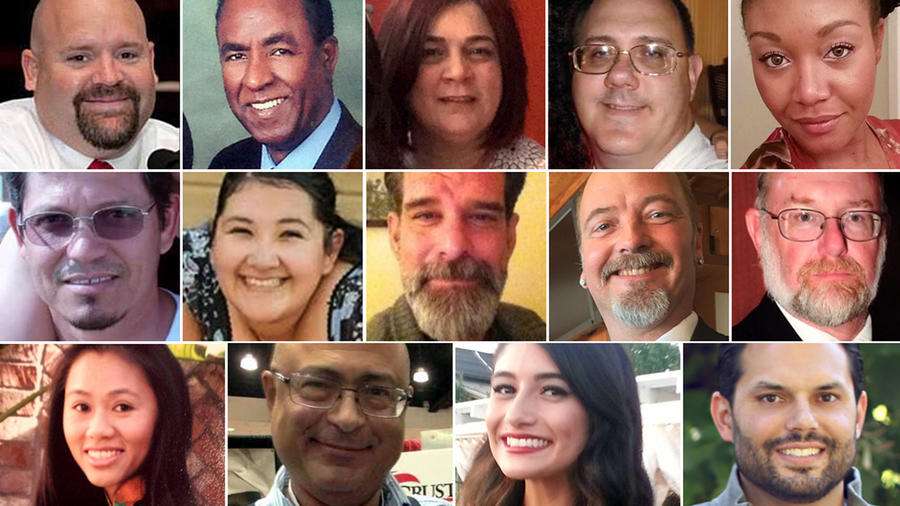 The Los Angeles Times has a detailed list, describing each of these innocent victims in detail.

For me, one story stood out:

“I’ve got you,” the 45-year-old San Bernardino man calmly told the young co-worker he’d just been chatting with, wrapping his arm around her as they hid behind a chair trying to escape the erupting fusillade.

Just five minutes earlier, Johnson, a health inspector for the county, and 27-year-old Denise Peraza were quipping about the clock, she recalls.

….“While I cannot recall every single second that played out that morning, I will always remember his left arm wrapped around me, holding me as close as possible next to him behind that chair.

And amidst all the chaos, I’ll always remember him saying these three words, ‘I got you.’ I believe I am still here today because of this amazing man,” Peraza says.

This is who we are…not the vengence-seeking Islamaphobes that Loretta Lynch implied that we are in her remarks regarding this incident.

I can’t help but note that today is the anniversary of Pearl Harbor. Though the magnitude of murder may not be comparable, the attitudes that led to the event—ignoring the the growing militancy of our adversaries because it didn’t correspond to the preferred political agenda—is remarkably similar.

While San Bernardino’s families arrange funerals, the Governor of Yemen’s port city of Aden was butchered in an attack on his convoy and British police have declared a knife attack in the London Tube an act of terror.

As in 1941, we have been struck on our own soil. However, Franklin D. Roosevelt didn’t have an Attorney General who blamed Americans for their bad feelings toward the Japanese, argue that gun control could have prevented the Zeros from hitting Hawaii, insist that the Emperor-based religion of Japan was peaceful, or assert that climate change was more of a threat than the Japanese (or the Nazis, for that matter).

The best way to honor our victims is to do everything in hour power to not add more names to the list. Let’s hope our administration finds the courage to do just that.

Let’s not lose our focus on the biggest victims of this shooting: The hypothetical targets of unspecified possible backlash against Muslims.

I’ll always remember him saying these three words, ‘I got you.’ I believe I am still here today because of this amazing man,” Peraza says.

It would be WAY better if Mr. Johnson had been able to think those words as he squeezed off the second round of a double-tap fired into the terrorist pirates’ heads.

As these events continue, I’m going to stop seeing faces of innocent people and start counting names of people who walked into a gun free zone of their own free will and accord.

The loss of innocent life is almost as tragic as ignoring the reality of the time we live in.

What part of “Death to America” don’t we understand or comprehend?

Liberals take great satisfaction in the wars they’ve started between Americans with different hyphenated adjectives. And sadly many Americans are distracted and play right into their scheme. However, this death toll proves one thing. Radical Islamists do NOT discriminate, they’re content to kill any and all Americans.

For all who perished that murderous day.

The Lord is my shepherd, I lack nothing.

He makes me lie down in green pastures,
he leads me beside quiet waters,3 he refreshes my soul.
He guides me along the right paths for his name’s sake.

Even though I walk through the darkest valley,
I will fear no evil,for you are with me; your rod and your staff,they comfort me.

You prepare a table before me in the presence of my enemies.
You anoint my head with oil;my cup overflows.

Surely your goodness and love will follow me all the days of my life,and I will dwell in the house of the Lord forever.

For the family and loved ones struggling with unimaginable grief and pain.

The Lord make his face shine upon thee, and be gracious unto thee:

The Lord lift up his countenance upon thee, and give thee peace.