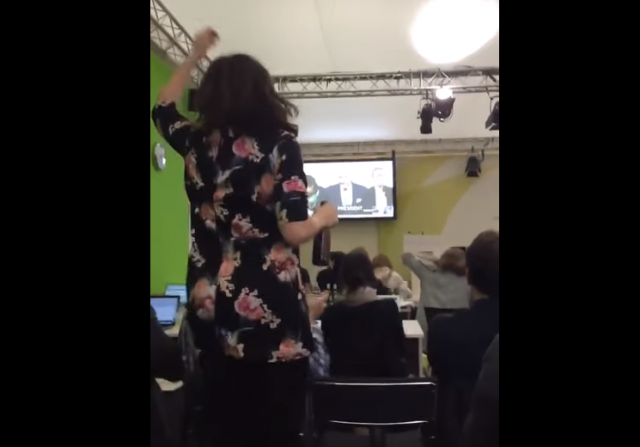 Here’s something you may have missed over the weekend. While most Americans are concerned about terrorism and the growth of ISIS, President Obama and other world leaders met in Paris to discuss climate change.

When an agreement was reached, journalists reacted like excited teenage girls.

T. Becket Adams of the Washington Examiner has the story:

Journalists appeared to erupt in cheers Saturday afternoon after representatives from nearly 200 countries agreed to adopt the Paris Agreement, a major accord vowing to fight global warming.

Before the climate change deal was announced formally by officials in Paris, members of the press reportedly gathered close to cover the event, watching anxiously from a large room on site to hear news of the final agreement.

“Watching [the Paris Agreement] close [with] other journos,” the Economist’s Miranda Johnson tweeted from the French capital.

She then compared the event to the suspense of watching a major 2002 soccer match between England and Brazil.

Then the moment of truth arrived: A representative announced that the deal had passed, and that 195 counties had agreed to work together to fight climate change.

The reaction from the journalists reportedly on hand was a mixture of excitement and unbridled jubilation, as a video Johnson uploaded to social media showed.

As you watch this, remember that some of these people are covering the 2016 election:

Whether they realize it or not, this is what those “journalists” are cheering for.

The draft of the international agreement to deal with climate change, which is being considered today in Paris by representatives from 195 countries, calls for the developed nations of the world (which include the United States) to transfer wealth to developing nations, including through “public funds.”

“Developed country Parties shall provide financial resources to assist developing country Parties with respect to both mitigation and adaptation in continuation of their existing obligations under the Convention,” says Article 9 of the draft agreement.

“As part of a global effort, developed country Parties should continue to take the lead in mobilizing climate finance from a wide variety of sources, instruments and channels, noting the significant role of public funds,” says the draft.

The draft agreement sets a goal for developed countries to dole out at least $100 billion per year by 2020.

So climate change is really about wealth redistribution? Who knew?

Where I sit, it is received wisdom that, not just climate change, but Anthropogenic Global Warming is real and an urgent (Urgent! I say!) problem.

Never mind that the actual air pollution problem is in India, in home that use wood or dung-burning stoves, and China, which does not use current or even dated, clean-up technology due to cost, that the earth has a history going back many billion years, that its temperature and carbon dioxide level have been both higher and lower than they are now, with no discernible correlation, and the proponents of global warming have repeatedly been caught cooking the books.

The scientists out here (California) are observational scientists, not experimental scientists, and when they report an observation, the press extrapolates wildly. People with a grasp of basic statistics are few and far between, even though it used to be taught in high school.

“…temperature and carbon dioxide level have been both higher and lower than they are now, with no discernible correlation…”

Wrong. The paleo-climate record shows that there is a correlation between CO2 levels and average global temperature – CO2 levels always go up two or three hundred years AFTER a temperature increase. Al Gore mislabeled a graph in his kiddie book on AGW in order to show that temps go up after an increase in CO2, which is exactly wrong. This error was pointed out to him, but subsequent editions of the book repeated the error.

This is like getting all emotional about the Rebellion’s ultimate defeat of the Empire.

It’s all a fantasy.

And these people are STOOOOOOOOOOOOooooooopid.

Further, for a very long time, I have considered MSM “journalists” as dishonest and ignorant. For just as long, I have been looking for evidence that I am wrong in my assessment. I am still looking.

Y’all shut up. The science is SETTLED. Read your daily memos, will ya?

The same “tools” who cheered and enabled the election and re-election of an incompetent, useless, anti-American president, who is a world wide disgrace. And people wonder why we are so upset?

Arriba las manos! I am a climate refugee. Give me your money pronto!

The conflation of logical domains and deprecation of morality is remarkable.

Yes, the deprecation of morality is remarkable. But it also might be tax-deductable.

The gist is that many of the journalists who report on environmental/climate issues report more like advocates than neutral journalists. The first study purports to demonstrate how the journalists studied have “radically redefined” objectivity – in the words of the study’s author – by downplaying skeptical views and promoting a presumed consensus. This conveys to the reader a lack of uncertainty.

The second study shows that many journalists work directly with environmental and climate non-profit advocacy groups to communicate a common message to the public.

The third study is similar to the other two, except it shows the coordinated messaging is transnational, at least among the 24 organizations in five countries studied.

In light of these and other studies, it is unsurprising to see them cheer. They are, essentially, environmental activists.

Thank you for the links, Mag. Advocacy journalism is a huge problem, and documenting it via studies like those you linked is a good first step for correcting it. Whether and how the advocacy problem can be corrected is still in doubt, however, per the paucity of prescriptive measures that are being proposed. Alternative media, like this site, are willing and able to expose the media’s bias, but we need more.

The Bill of Rights defines the rights that we each, as individuals, possess by the grace of God (or as natural rights, or however one wishes to explain it). It is my opinion that my individual right to a free press is being abused by huge corporate interests in league with a government that seeks to suppress, manipulate, rob, and enslave we the people in every possible way.

In other market news…There seems to be a huge supply of useful idiots. And at the same time the demand by the Climate Change Booster Club for more card-carrying members grows daily. The Booster Club is not at all worried, though. Suckers are born every day and so climate change will rage on.

“There seems to be a huge supply of useful idiots.”

There is a law of economics that says if you subsidize a thing, you will get a surplus of that thing.

Worse than useful idiots: they’re corrupt cowards – individuals who have sold their souls in return for being allowed to ‘feel good’ and being absolved from any true civil responsibility.

Millions and millions of little Boehners.

Failed nothing – many of those ‘businesspeople’ went into their business solely to get rich skimming government subsidies from crony government contracts. (Can you say ‘Soyindra?’) Broke nothing – the individuals who started the likes of Solyndras were Obama cronies who are now wildly rich, despite never producing a thing, nor ever intending to:
https://www.washingtonpost.com/politics/specialreports/solyndra-scandal/

No one has ever explained why the tail end of the Little Ice Age was such a golden time for mankind and the rest of the biosphere.

If they were bright enough to handle even elementary math and science classes, they wouldn’t stoop to journalism as a major.

CAGW – The largest hoax ever perpetrated on mankind.

It’s about redistribution of wealth, global socialism, and political power.

It has NOTHING to do with science.

1.) Proof that no climate model is reliable – every group of researchers develops their own model because they have no trust in validity of the results produced by any model created by any other researcher.

2.) Models are not science; they prove nothing. Scientists notice that the average global temperature is increasing (assuming for the moment that this is actually true). They then create a hypothesis that speculates as to cause. A theory is then developed to show how a cause could possibly work (in the real world). Computer models only demonstrate how the theory would work if it were correct. The model does not, by itself, demonstrate the correctness of a theory. Theories must be tested by observations made in the real world. Science requires experimental repeatability or the amassing of sufficient data, the existence of which can’t be explained by any other mechanism(s). (It’s like the difference between the standard of proof between a criminal and a civil trial. Both forms of trial are intended to get at the truth, with the former type having a higher standard of proof than the latter. Both forms produce results that are, however, accepted as nominally “correct,” until additional evidence is produced that refutes the results – just like science. Climate science is being run like a civil trial, but the data is open to other interpretations, so the warmists’ “verdict” on climate change is not reliable. It is this other “evidence” the warmists don’t want the public to hear about – aside from the warmists’ shenanigans with the data. Presuming that “global warming” is true, there are other theories, yet to be invalidated, besides AGW that could explain its cause.)

3.) Not one single paper has been published in a peer-reviewed journal in which the authors demonstrate the validity of the theory of AGW – their papers merely display the results of modeling (the development of simulations that show how a mechanism might work in the real world) and this proves nothing.