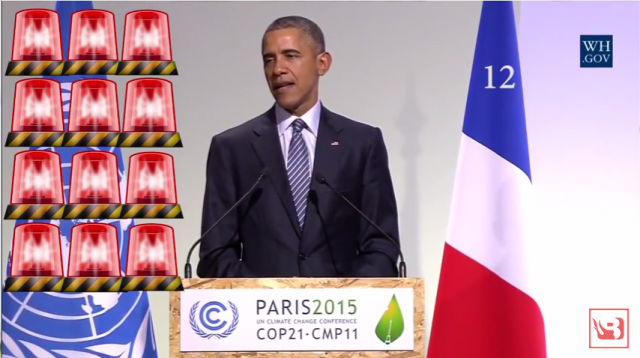 The US Congress just gave Americans an early Christmas gift: It voted to block new EPA rules regarding coal plants!

While the move will not stop the regulations at the heart of Obama’s pledge to drastically cut U.S. emissions, Republicans hope they can show other world leaders that the president’s successor may be unwilling to follow through on that commitment.

“We want the world to know that there is disagreement with the president on this issue,” said Rep. Ed Whitfield (R-Ky.), who chairs the House Energy and Power Subcommittee and helped lead the push.

The House adopted two Senate-passed resolutions blocking EPA rules that apply to new and existing power plants, but the White House has already promised that Obama will veto them. The president returns to Washington Tuesday evening after attending the first two days of the United Nations negotiations in Paris aimed at producing a new global agreement to limit carbon emissions and help poor countries cope with the effects of climate change.

And while Congress may not have the votes to overcome a veto, its confirms the enormity of the failure of Obama and his plans related to the ongoing UN Climate Conference.

Parisians, Americans, and others around the world were taken aback when Obama informed reporters in the “City of Light” that mass shootings don’t occur outside of the United States…despite the fact Paris is still recovering from the seige of bullet-spraying terrorists who killed 130 people just 19 days ago.

Now, embarrassing footage is streaming from conference goers that demonstrate how poorly Obama was received during the much ballyhooed event. For example, as his 3 minute talk went over the mark by 10 minutes, the President continued to drone on despite many warnings.

Obama’s responses to reporters were so bad that Washington Times contributor Charles Hurt questions if the man is able to still handle the office:

Anyone who listened to President Obama speak to reporters in Paris on Tuesday would reasonably conclude it is high time to start drawing up the papers to transmit to Congress for his removal.

…Without the use of the teleprompter, his speech can be described only as “halting.” It was impossible to count the number of times he seized up, able to deaden the silence with only a drawn-out “uh,” “um” or “ahhh.”

The White House dutifully scrubbed all the halts and stutters from the official transcript, and it was impossible to count them in real time. But a sample of his incoherent word salad found him stuttering about every 15 words, which comes to more than 330 “uh-um-ahhs” in a single appearance.

And while it is doubtful Congress will act to remove Obama, at least it seems to be pushing back on the presidential agenda more robustly than it has for the previous 6-plus years. If it can snuff out the toxic progressive climate-change agenda, it will be a Christmas miracle that will keep giving until Jan. 20, 2017 and beyond.

There is something seriously wrong with the idea that the President can make laws and can then Veto a Congressional bill that overturns them.

When I was a kid, we had something in this country called a Constitution.

Climate calc: There are at least six degrees of separation between Obama and reality.

The EPA can be easily disarmed by changing the laws they operate under and slashing their budget. But, the GOPe wants to use the EPA as a campaign tool to extract money and votes from the benighted voters. We will get GOPe noise but no fixes.

And, O knows the GOPe (does the “e” stand for establishment or eunuch?) will do nothing to stop his rule by decree.

“The EPA can be easily disarmed by changing the laws they operate under and slashing their budget.”

Part of what needs fixing is “standing”. Environmental groups seem to have standing to sue in Federal courts. As an individual I can not file a lawsuit without some standing in the problem. They can whenever and wherever they feel like it. Their “busybodyness” has been legalized.

EAT YOUR BROCCOLI! For your own good!!!!!

We could be seeing that beginning. Not an event of unmixed blessings, however…

Obama doesn’t care. He’ll just EO them through anyway. In fact, I think he digs the opposition. It frees his inner totalitarian, which is feeling freer by the day.

“And while it is doubtful Congress will act to remove Obama”