My advice to you: Drink Heavily. 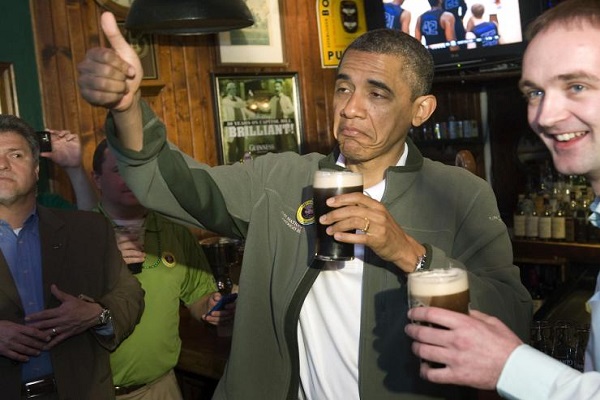 On Friday, many Americans were taken aback when Obama elected not to address the nation in the wake of the San Bernardino terror attack.  However, on Friday, he was busy meeting with Gabby Giffords about gun control, so while he addressed the issue in his weekly address, he’ll be delivering a speech tonight (at 8 p.m. EST).

Going by reports of tonight’s speech so far, anyone hoping for what Megyn Kelly calls the “Comforter in Chief” or for him to declare the San Bernardino terror attack an act of war will be disappointed.

Apparently, Obama’s plan is to lecture us on what terrorism is and how it came about (his version of it, anyway), bemoan the Second Amendment protections afforded the American people, and harangue Congress into passing stricter gun laws.

This sounds ripe for another Obama speech drinking game.

Drink when he blames America for Islamic terrorism, when he mentions gun violence (as if that were the problem with terrorists), terror watch list, the Crusades (he’ll have to get that in there at least once), and the need for Congress to “act.”  He may even toss in there that if they don’t, he will . . . with his pen and his phone because “we can’t wait.”

In an appearance on NBC’s “Meet the Press,” Attorney General Loretta Lynch previewed the remarks President Barack Obama will make when he speaks to the country Sunday evening about the recent terrorist attack in San Bernardino.

“What you’re going to hear from him is a discussion about what government is doing to ensure all of our highest priority — the protection of the American people,” the attorney general said.

She also said that he’ll speak on the actions the United States has taken to keep the homeland safe since the attacks in Paris last month. But there will be an element of politics to the speech.

President Obama will do more than just call for calm, he will ask “Congress to review measures and take action.”

According to the White House, Obama will (finally) speak of “defeating” ISIS (he calls them “ISIL”).  Hopefully, it’s not destroying them with “powerful rebukes” and name calling (“JV team,” “killers with good social media,” “a vicious death cult“).

This will be Obama’s first Oval Office address since August of 2010, when he discussed the end of U.S. combat operations in Iraq.

“The President will provide an update on the ongoing investigation into the tragic attack in San Bernardino,” the White House said in a statement. “The President will also discuss the broader threat of terrorism, including the nature of the threat, how it has evolved, and how we will defeat it.”

. . . . He will talk about his determination that the Islamic State group must be destroyed. And he will make the case that the United States must draw the nation’s values – its commitment to justice, equality and freedom – to prevail over terrorist groups.

For those playing along at home, drink when he says “that’s not who we are” or some variation thereon.

Twitter is already gearing up tonight’s speech and offering suggestions for its accompanying drinking game:

Seriously Obama, just shut the fuck up. The entire world gave up taking you seriously a long time ago. You’re a pathetic joke.

I usually don’t think it’s appropriate to use the “F” word but in the case I agree 1000%
What Paul said! 🙂 Please!

Don’t forget — a pathetic joke with enormous power and a year to abuse it.

Well I don’t know about all of you but I am already feeling triggered by Obumbles speech, so I will probably watch it from my safe space…you know the one that is safe because of all the guns in it.

Since his “lectures” ramble on and on….the first 5 minutes of drinking should make one go unconscious before he ends. Chug the whole fifth if “teachable moment” is uttered. Whether hung over or not, many of us with be gagging and throwing up hearing his pontifications. Considering all the allies and Americans in foreign lands abandoned and the sacrifice of our troops thrown away by this man, San Bernardino isn’t even a “set back” to him.

Here are my predictions on who Obama will blame while avoiding the use of the term “Islamic radicals”.

You left out George Bush!

If someone whacks this jackass, I will not shed a tear. Unlike his fellows on 9/11/01, I won’t cheer but the phrase ‘good riddance’ will buzz inside my head like a demented mosquito.

You’ll have to chug the bottle when he suggests that the U.S. will provide support and intelligence for any other country that wants to take the lead on the fight against ISIS(L).

This is going to be a hellish 8th year. Can’t let up the pressure against the like of him – and the hacks running the GOP – for a second.

Speaking of drinking, where’s Boehner when you need him? (Though he’s probably off somewhere sharing a fifth with that other drunk sleazeball, Hillary Clinton.)

I’ll wait for the transcript. I’ve spent the last 7 years refusing to watch him and I’m not gong to start tonight.

The time for drinking or jokes is long over. We can become another Soviet Union of despairing drinkers or we can resolve to rout these people from rule.

He will talk tonight about more powers to fight terrorism. These will include massively expanded terrorist watch lists. This is a pure opportunistic, unconstitutional backdoor to gun control. Beyond that, he will lay rhetorical groundwork for executive orders on gun control. And they will come.

“These were two loving, caring moderate muslims, even willing to reach out and forgive Christians for the Crusades and having Christmas. Then,
suddenly, Climate Change came to San Bernadino….”

…And because of Global Warming/Climate Chief, San Bernardino is a DESERT, for God’s sake!!!!!!

Hey Fuzzy: The speech was so short, I didn’t have a chance to uncork the bottle.

Heh, me, either, Leslie! He had a star-studded party to get to, apparently, so he kept it short (empty, and meaningless). I was surprised he showed up on time, too; he’s usually late.